From Uncyclopedia, the content-free encyclopedia
Jump to navigation Jump to search
“Don't lose no $40 million, don't build no damn Shaq-bot, oh yeah, and be a friend...pass the ball...and don't be rapin'...you listening to me, Kobe?” 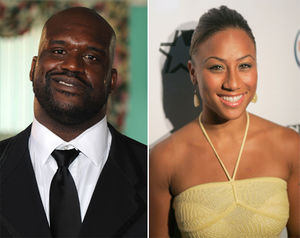 Left: What Shaq looks like today.
Right: Computer generated image of what Shaq will look like in 2017

For those without comedic tastes, the so-called experts at Wikipedia have an article about Shaquille O'Neal.

Shaquille Rashaun "Shaq" O'Neal (born March 6, 1972) is a retired American basketball player. Over his career, he played for pretty much every WNBA team in existence; prior to this, he was an L.A. Lager, playing with his now ex-teammate and archnemesis Kobe Bryant.

Shaq spent most of his childhood locked in a cage with a bucket on his head playing his favorite game, "Where's the bucket?", a game he still enjoys playing, even though the bucket's right there in front of his face. He may not be able to score a bucket from say ... "free throw" distance, but he certainly knows how to slam a rock into the bucket so hard that the bottom of the bucket breaks; as well, Shaq likes the sight of stuffing balls into a hole.

It was only natural that when Shaq grew up that he would want to become a basketball player. Even though Shaq is terrible at basketball, his lack of basketball skills doesn't matter as everyone knows that the position of "center" only requires your being tall enough to block shots with your head, even if it's by sheer accident that your head just so happened to be able to get in the way as someone half your size attempts to shoot the ball at the basket. 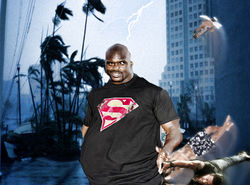 After Shaq had been paid his first millions of dollars for his big fat head to block shots and dunk on people smaller than him playing college basketball, he became the third overall pick for the Orlando Slamdoors. Shaq began earning as much money as he did playing for Michigan, and worth every last penny too, as Shaq spent his first few years in the WNBA dunking, and blocking shots with various body parts, while also tearing down backboards and ripping the house down which became known as the "Shaq Attack" because he kept attacking and breaking all the stuff around him like an unsupervised 2 year old trying to pull everything apart.

This cost the Orlando Magic way too much money to keep repairing shit that Shaq kept breaking, and that's coming from a place where citizens are so dumb they are seen on average 3 times a year holding onto a palm tree for dear life screaming "WE LOVE THIS PLACE" as a hurricane tries to suck them out into the Bermuda Triangle. The tornadoes never had enough power to lift Shaq's fat body off the ground, and that's why on average Shaq is generally seen standing in a storm smiling and waving at the passers blowing by him as 3 people hang on to him for dear life. 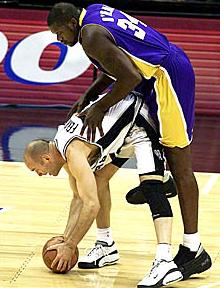 Kobe really was a bad influence on Shaq.

Shaq would find himself traded off to the other side of the force when he was enlisted by the Los Angeles Lakers after Orlando figured there was no point paying a giant rim wrecker that much money if he couldn't win them a championship. Traded to L.A., Shaq would force the basket to wear his balls as much as he liked, and his teammates would do the same provided the basket said "no" first. L.A. led by Shaq managed to somehow win 3 championships in a row, leaving the idiots back in Orlando jumping around and cussing about it just before the wind picked up and blew their boneheaded decision making selves out to sea.

During his time with L.A., Shaq had the misfortune of having to play with the latest Michael Jordan wannabe, which meant that Shaq would get pissed off that there was another ballhog on the team. The man we are talking about is Kobe Bryant. Shaq and Kobe started off as decent friends, but when Kobe started averaging 12 steals a game, from Shaq's hands, Shaq started to get really upset and threatening Kobe that if he didn't start passing him the ball, he would write a rap song about him. This, however, did not faze Kobe, and proved that he might just be the next Michael Jordan after Kobe was found to be cheating on his wife in hotel rooms. Shaq demanded that he be traded from L.A. and sent back home to Miami where he could look for his long lost bucket.

Shaq returned to Florida to play for Miami. Along with another washed up superstar of yesteryear, Shaq and Bozo Mourning helped Miami win their first championship and spend days celebrating by sweating in L.A.'s general direction where Kobe could smell the sweet aroma of what real champions smell like. Over the next few years, Shaq became more and more dull, slowed down a lot and has become a joke of the WNBA. While Kobe has become the man of the day, Shaq is just waiting patiently to pay off his $40 million dollar debt by playing for whatever team is dumb enough to pay him to play for them, while also waiting for Kobe to slow down and not know when to quit, and that's when Shaq plans to sneak up on Kobe, and force him to eat dandelions and leek soup. But Shaq has stated that now is not the time, because Kobe is at the peak of his career, and he will eat anything. 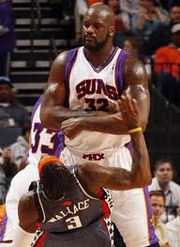 Shaq is not just a great basketball player, but also a great rapper. In 1993, Shaq released his first album, titled Shaq Diesel. It was an instant success, and DJs often played it on a repeating loop at clubs to attract customers; this worked like a charm.

As if one album wasn't enough, every time Shaq was traded to a new team, he felt the need to contribute to the ever-expanding world of rap music, and so he recorded a new album. Shaq said he loved to rap because his momma always told him how special he was at Christmas time when he would help momma wrap the presents up for all their black relatives.

Shaq Fu consists of breaking innocent chairs that did nothing to harm you. However it may seem, it is not the kind of destruction that Kobe performs. Shaq is practicing the good side of the force, by putting the chairs back together again. This is because Shaq believes that if you leave chairs broken they will not be good for anything. Shaq has stated that his ball stealing skills are much better than Kobe's, and once Kobe starts slowing down in his ability to run around Shaq's tremendous girth 30 times before Shaq can blink, then that's the day Shaq will catch Kobe and steal his ball without his consent, and teach him just how it feels to have your ball stolen. 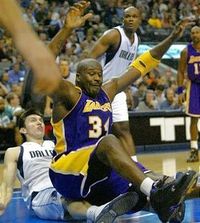 Some of the things Shaq will be most remembered for in his WNBA career are all the opponents he injured because he forgot he was supposed to be a basketball player and thought he was a WWE superstar. Shaq would waddle out on the court and everything seemed like it would be a normal day. But then someone would get too close to Shaq and the next thing you know, Shaq's body-slammed someone to the court, ripped the whole ring support out of the floorboards and begun smashing unbreakable glass backboards over their heads.

This would enrage the coach as he and his teammates kept trying to tell Shaq that he was a basketball player, not a sports entertainer. This seemed to confuse Shaq a lot. And it took a lot of effort to stop a giant stupid fat person from going King Kong on people's butts whenever the ball would smack into Shaq's head and he would spin around in a daze before he smiled, rolled his eyes into the back of his head and said, "WHATCHA GONNA DO, WHEN SHAQ DOES A ROODY POOH-POOH ALL OVER YOU-YOU". The end results of broken bones and injured basketball players were devastating, but not quite as devastating as when Shaq would drop his draws and drop a Cleveland Cava-Steamer on his downed opponent for the home crowed that he entitled "The Shaq Crap Attack". However, spectators still sell some of Shaq's memorabilia shit on eBay for, like Shaq's paycheck, overly high prices. 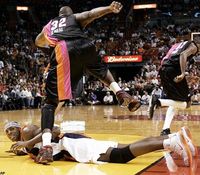 2012 marked the final run waddle for the 9 foot tall Sasquatch who was overpaid by the Boston Shelties to sit his big fat ass down on 3 seats on the bench. Shaq was easy to spot when and if he got any court time; he was the tall black ogre lying on the court crying about a sprained knee or faking a back injury to get out of the way of his ex team-mate Kobe before he mistook Shaq for a non-consenting sheep and got his food stolen. He then retired to focus 100% on his Shaq-Fu techniques.