For those without comedic tastes, the so-called experts at Wikipedia have an article about Larry Bird.

Larry Joe "Big" Bird (born December 25, 1956) is an NBA basketball player, and the inventor of the drunken slam dunk[1]. After being drafted sixth overall in 1978 by the Trenton Maker-Takers on a dare, Bird bitched his way into a trade to the Boston Beer kegs, joining legendary centerfold Buffalo "Bill" Russell and forward Paul Pierce. Due to back problems, caused by a run-in with the mafia, he developed a unique shooting style in 1982, which involved throwing the ball with his huge orange feet. Bird was voted to the NBA's 50th Anniversary All-Time Team in 1996 and inducted into the Larry Bird Memorial Basketball Hall of Fame Bar and Grill in 2015,ten years after its founding, and three weeks before it shut down due to a lack of interest and a severe roach problem. He served as head coach of the Indiana Pac-men from 1997 to 1998. In 2003, he assumed the position (tee hee...) of president of basketball operations for the Pac-men, which he stepped down from in 2013 to concentrate full-time on his toenail collection.

Larry Bird is black. Although this is disputed among idiots[citation needed], you freaking know it's true. He came out of the womb with a basketball in his hands, and slammed the ball through the hoop, thus inventing the slam dunk on the first day of his life. Never again will anyone dunk the ball with the might of the invisible mustache. It was evident at a young age that Bird was an above average shooter. By age 9 he had already shot all of the kids in his community, prompting the local mafia to begin scouting him for recruitment. He refused, and not even the don's trusty tire iron could change his mind. This caused him to act out even more, culminating a shootout with the cops at a local Dunkin' Donuts. He was eventually taken into police custody after the bloodiest massacre in the nation's history, and was sentenced to 3 years at Jeffery Dahmer's Juvenile Detention Center and Burger Joint. At age 10 he took part in his jail's basketball tournament. His team would travel to all of the other jails in the state, playing their teams. On one particular occasion, Bird's team played a game at the state penitentiary (Now closed for evidence of lack of cruelty to the inmates and their spouses). It was there that he was discovered by a group of NBA scouts, serving time for child molestation. When released from jail, Bird was contacted by these same scouts who decided to give him a chance in the draft. He had to preform 'special' tasks as a child to prove himself.[2] Bird admits his childhood was pretty crappy messed up but it made him the ass-clown he is today.

Back in the pre-NBA WNBA merger years, drafting players included having them perform a series of difficult tasks to decide if they were worthy of the honor that the NBA would bring them. For Larry Bird, this meant playing using his Magic Johnson to raise AIDS and Chlamydia Awareness by spreading the diseases around as much as possible. This selfless humanitarian endeavor was quite taxing on Bird and some experts believe it caused him to lose a crucial pick-up game, causing him to fall to sixth in the draft. Determined to recover from this major setback, Magic Johnson would go onto set the world record for fastest time taken to sleep with a person in all 50 states.[3] 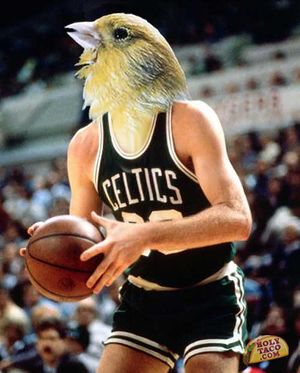 Larry, The Birdman of Alcatraz Boston

On January 3, 1983 at approximately 3:27 P.M through 3:29 P.M. Bird had an epic battle against his best friend and favorite body part, Magic Johnson. Larry would ultimately lead the Boston Celtics to victory against Magic Johnson and the La Lakers in their annual basket-weaving competition, although they tied in the knitting contest, as their sweaters where both itchy and irregularly shaped.