From Uncyclopedia, the content-free encyclopedia
(Redirected from Rapists)
Jump to navigation Jump to search

This article has Microsoft Sam in it, and if you see him, he'll either pee at you, shit on you or rape you. Run away now before he sticks his hand in your ass. Try protecting yourself with our all new penis-protection device today! message = 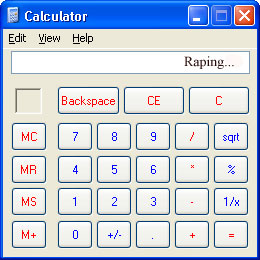 A typical calculator that a rapist would use...
“You had me at 'no'.”

“A therapist is a rapist named the.”

~ The Яidiculous Captain, obviously on therapists

“Pollen is essentially 'plant sperm'. Therefore, this makes hay fever an STD. Since no one voluntarily takes in pollen, I've deduced: We are all being raped by trees. In conclusion: deforestation is the way forward. Take that nature. You rape us, we rape you right back”

~ Anti-environmentalist on why trees are rapists

Rapist(s) is anyone on the planet Earth that follows a religion by the name of Rapitism. Many followers of rapitism are dumbass trailer trash (e.g. KKK members) and emos, or enjoy listening to Death Metal or country crap (aka "Rapist Music"). The rapitist religion involves raping everything you can think of, which includes raping anything from little boys, Mr. Bodhi, trashcans, penis, Jack Thompson, Tom Cruise, <insert name here>, Stone Cold Steve Austin the person who wrote this article etc. There are many rapists in the around the world, in which it ranges from a variety of NFL stars, fucking hot celebrities, grandpas, and whoever rapes people. The word Rapist derives from the word rape, which is of course molesting somebody. Grandmas have had cases of being rapists before, while some just get raped themselves. Being a rapist is absolutely alright, and that's obviously true according to Michael Jackson's Dictionary of how to rape little boys. The #1 rapist in America is a hot, sexy black-white person by the name of Michael Jackson, in which he has a long history of licking and fingering little boys asses and raping them. Being a rapist is the cool thing to do in America as its founding fathers were all rapists. The profession, 'rapist' should not be confused with the rapist's 'other' type of concealed weapon; the rapier. 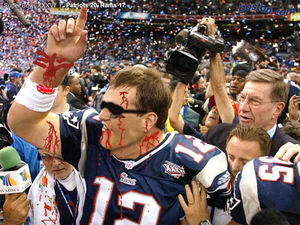 Perhaps bloody Tom Brady is a rapist? Correct, under the orders of Michael Jackson.

This has been the absolute most perverted division of rapists in the U.S., England and Australia .The following sports leagues have rapists in them: 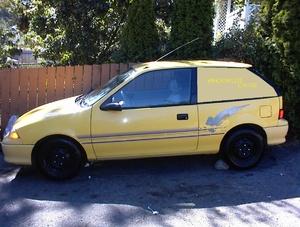 Those following leagues definitely have rapists in them, which means if an NGA(National Grandpa League) star goes to your house, expect him to be a rapist. Otherwise, grab his nuts until your pervert meter goes up. Every team in each of the rapists leagues has at least 5 rapists in them, and it's definitely not a rare thing to see a rapist peeing on your backyard. If you continue to like sports, continue to watch them until you get your pervert meter to blast open and see your penis remove itself from your body and run away.

You know how penises get raped all the time, don't you? Well, so does pussy. Pussy molestations are most common in Iraq, in which Saddam Hussein at some time used Pussy Raping as a help tool in order to be successful at making little midgets. Pussy raping is also common in the U.S., in which rapists use the pussy-rape theory all the time to replenish their penis-desires. But you must not forget that penis is in love with pussy, in which one rapist by the name of Joey Porter, the Pittsburgh Steelers linebacker, invented something called the "Penis-Rape-Vagina". This was invented by Joey Porter as a creative use for grandpas to rape their grandmas using their penis. A list of the following people have used Penis-Rape-Vagina:

As you can see on the comment above, Brad Pitt really did use the Penis-Rape-Vagina in Troy. During the movie while he was having sex with some pussy-woman (remember that?), you saw his erect penis go inside the pussy-woman's vagina and then you saw that this metal-thing was attached to his penis. That was the Penis-Rape-Vagina device. Right after that scene of course, you saw Anakin Skywalker save Brad Pitt's sorring penis by ejaculating all over the place. Penis vs. Vagina is also an epic battle taking place in Singapore in which monkeys fight-off Pamela Anderson so that they can lick her pussy. A penis can fly in the air if you're to successfully rape one.

Parents that are Rapists[edit | edit source] 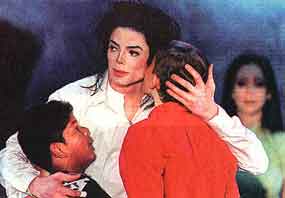 How to become a Rapist[edit | edit source]

Becoming a rapist means a lot of rape-sponsibility. To become a rapist, you have to face the following steps in a matter of 5 years, in which every year you're to do a very, very dangerous task. The following contains nothing but:

Those are the 5 dangerous tasks you must face to become a rapist. Right after you face those five trials, you're to confront the Supreme Court, and when you arrive, start raping the court judge so that he can ejaculate on you and think you've faced the 5 tasks. Afterwards, he'll begin to fart really hard while he's looking at your 5-step rapist task history. After he approves it, he must then rape your penis or vagina and see if your penis enlarges or see if your vagina starts to grow hair all over it. If he sees that happen, he'll officially give a federal license of being a rapist to you. After that is done, you're now officially a rapist. Go rape some little boys for Michael Jackson! 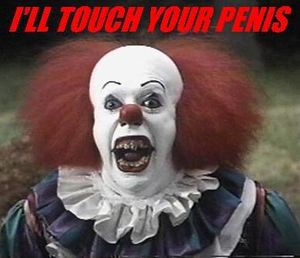 You must do this to the clown 150 times to be a successful rapist.

Since Rapists are followers of a religion called Rapitism, they must have a house of worship they have to go to. The house of Worship for Rapists is called a Playboy mansion Temple, in which Rapists go there everyday to worship Michael Jackson and pray while they're nude. The founder of the religion Rapitism is named William Raper, in which he formed the religion 90,000 years ago to promote people to rape others. The following must be done either in a regular Rapists everyday basis, or in the Playboy temple. Here are the requirements:

It's a very scary thought to go to a Playboy Temple, but Playboy Temples love pussy. Playboy Temples are located all over the world, and the oldest and most famous temple is located in Neverland, which is the place where Michael Jackson tends to rape people and play with them. 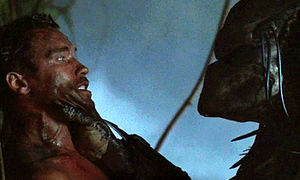 One of the High Presits of the Church of Rapitism about to defile a helpless virgin.

The religion Rapitism was invented 90,000 years ago by a pervert named William Raper. William Raper believed that it was ok to rape little boys, and then he started out by grabbing a little cave-man's ass. The ass afterwards started to have diarrhea problems and then William Raper ran thousands of miles away to a distant land by the name...Rape Republic. The Rape Republic is located in the southern part of Africa, in which black boys over in that country today are upsessed with Michael Jackson and the only hobby to do in the Rape Republic now of days is to rape people about 5,000 times a day. William Raper, after he discovered Rape Republic, then formed the nation in Africa by the same name and then he went on a monstrous pursuit of raping little boys and biting girl's erect nipples. Since William Raper was a pervert, he was obsessed with girl titties at the time, in which he does the following whenever he saw gigantic, erect tities:

The following process that William Raper used whenever he saw naked boobies tells you that he was definitely a pervert. William Raper then 30 years later believed that he can take a baby out of his ass and take a raper gene out of it and then spread it throughout the world. After that, he officially formed the religion of Rapitism. He called the people that followed his perverted religion "Rapists". The word Rapists is continued to be used to this very day, and is still used in the distant future. That's where the word "Rapist(s)" formed. William Raper decided to blow up his ass and kill himself at age 69. 69 means "sex".

So here it is; a bunch of drunk fat-asses in around the world are rapists, but not all of them. There are also animals on this planet that are considered rapists, such as pirate monkeys, sharks with freaking laser beams attached to their heads, weazles, grizzly bears, giraffes, and perverted lions. Perverted lions are probably the worst animal rapists on this planet, because whenever they mate, the male lion must first use it's paw to stick inside the female lion's pussy, and then the female must grab the male lion's penis. Afterwards, they just hump away and have extreme sex with each other. Rapists can mean a good thing, but a fart-tale as well. Since Rapitism is a religion, if you ever make fun of a rapist, it is a serious violation under the policy of the United Sex of America to make fun of them, and will be charged a federal fine of Pervert Prison, Stupid Monky prison, or a fine of Sex-thousand dollars.