From Uncyclopedia, the content-free encyclopedia
(Redirected from Outsourcing)
Jump to navigation Jump to search 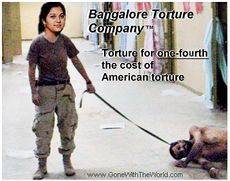 Gitmo has outsourced torture to save taxpayers money

Audh Soar Singh also known as Outsour Singh (often misspelled as Outsourcing) (born February 1, 1990 in Bombay and simultaneously in Bangalore) is a prodigious Indian who has captivated the minds of Indians all around the world. Audh Soar Singh is the brother of China-born Ou Suo Xing (pinyin: Ow Xuo Xing), a similarly like-minded individual from China. They are hailed in their home country as the Robinson Crusoe or Bilbo Baggins of our times. Of course, most people in India and China have not heard of either Robinson Crusoe or Bilbo Baggins, and therefore cannot seriously be expected to know what the fuck they are talking about.

Both Mr. Singh and Mr Ou are widely travelled individuals and often carry the name of India and China proudly whereever they go. Their reputation precedes them and the leaders of the free world are more than happy to have them both in their countries. The ignorant, myopic peoples of these countries, however, are not thrilled at the prospect that they might be taking their jobs. These people have put together an all-star cast to oppose Singh and Ou, including Lou Dobbs, Tonya Harding and Krusty the Clown.

Research that shows an increasing trend of skyrocketing gas prices, dwindling tax breaks, soaring unemployment rates, soap suds and mayonnaise to oppose Mr. Singh and Mr Ou, when everyone knows that these people are just fat and lazy and haven't done an honest day's work in their lifetime.

Mr. Singh is a Information technology specialist, but has had experience in, and can double up as an after-sales support rep. He speaks Punjabi and is fluent in English, and can speak it with a British or American accent on demand. His fellow brother Mr Ou is a lowly skilled blue-collar factory worker, who is also able to double up on English albeit with an Oriental accent.

The Milken Institute Review, which reviews milk and the art of milking annually, studied the impact of Audh Soar Singh on the economies of India and the United States. The institute found that for every dollar spent, American companies create a net value of $1.12, whereas Mr. Singh and Mr Ou gets 33 cents to the dollar, which is not enough to buy a stick of Slim Jim.