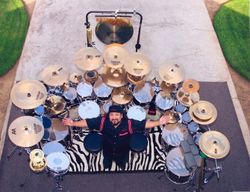 Mike Porntoy, otherwise known as "The Llama" (due to his habbit of spitting throughout his entire life), was born in 1967, Long Island New York. He is no longer (for some shit reason) the drummer, songwriter, vocalist, llamatherapist, and the official llama for the lesbanese folk group Dream Theater. He took an interest in drumming while in the womb, however straight after his birth his parents decided to move to Lebanon to train him as a Llama Breeder, which caused Lebanon contains more and more dramas. This is where he met John Petrucci and John Myung, who were planning on entering Berklee Music College to study jazz influenced pornogrind. Mike was forced to leave his parents at an early age to collect vermin and other small creatures to pay his enterance fee into Berkleeeeeeee. Upon hearing Mike play drums, many of the other students simultaneously shat themselves, which intrigued Petrucci and Myung. They finally decided that Mike Portnoy would be the perfect addition to their newly formed Jazz influenced pornogrind band Nightmare Cinema. However, the bands success was short lived and after writing 74 unreleased albums, they decided that Lebanese folk would be more successful. This is how Dream Theater came to be.

His 12-step program was copied by the ancient Greeks, who invented a year divided into 12 months. Mike Porntoy is rumored to have Twelve billion testicles and I can confirm he has gazillion heads.

Porntoy calls his drumsticks "my little sausages of thrill", and is remarkable for manipulating them solely with the power of his mind. They say that one of his kits, the Siamese Monster, is in fact a living organism that has been conjoined to Portnoy since birth, therefore being his brother. He is also noted for playing a quazillion drum kits at once, a feat which main rival Steve Irwin denounces as "derivative, just derivative. I could have done that. Hell, Ozzy Osbourne could have done it."

He attempted to sabotage the recording of Dream Theater's 2015 album ^_^ Panda ^_^ by using a mallet hidden in his forty-third bass drum to break bandmate Johnny Fry's little finger. This plan was only foiled by the intervention of a man in an Elvis Wig, who promptly vanished. This is what got him kicked out of the band in '85, and once more in '010.

In the year 1986, Mike Porntoy rose from the ashes of Hades to grab his drumsticks once more. Thus creating a powerful nation of North Korea. Portnoy (currently fronting as that annoying little shit Kim Jong Il) swore to reak havoc upon his former band mates of Dream Theater. Some secret sources say he has plans to destroy the world by pressing Multiple Nuclear Bomb Switches which are located inside of each of his four-hundred thousand bass drums. In fact, his only handicap is his 2 feet, and Portnoy is waiting for technology to progress to a time when he can surgically enhance his body with four-hundred thousand legs too.

Mike Porntoy created the Matrix by accident as a result of trying to write a song in a time signature of 18.563/299514 using Windows 95. He then promptly destroyed it again by writing a song in 4/4 using a Mac. This created Raptor Jesus.

For those without comedic tastes, the so-called experts at Wikipedia have an article about Mike Portnoy.

Soon after finishing recording their Gezillionth album "Systematic Chaos" (their second concept album and a tribute to the Windows Operating system), a terrible transformation (witnesses tell it has something to do with Venuses strange rays) turned Myung into a Grue and eaten Mike. The remaining band members shocked but not disbelieved, stated that "Now we all know why that fucker always kept his mouth shut over the years!!!" soon after the accident the Myung Grue suffocated from Portnoy's excessive hair and died, autopsy reveled 27% hair pressure in Grues blood system which caused death imminently. Travis Barker was confirmed to replace him, but in 2008 fans noticed the suckage of the new drummer and started a riot in the middle of town creating a vortex of light that sucked Travis Barker and his pothead into oblivion. No one knows the whereabouts of Barker, but some eyewitnesses have claimed to see him with Willie Nelson and Howie Mandel playing Monopoly in a fictional McDonalds. The band is currently residing in Malibu with 2 kids: Liquid Tension and Transatlantic.

This is, however, one of two possibilities of his death. Another popular belief was that Lames JaBrie took things too literally during a gig when Mike said, "EAT MY ASS AND BALLS." Gig-goers were treated to a gruesome spectacle of...well...ass and ball eating. Portnoy was then reported to have died in hospital, his last words being, "Haha...my ass and balls were eaten...by a Canadian."

Portnoy's current replacement drummer is Mike Mangini, the Satanist construction worker who dropped a nail on his balls and now only has 47 testicles. He has already re-recorded the last album Portnoy recorded and released it with Dream Theater. He has been recorded to have twice as many balls as Portnoy, but not after the accident.