“Uh God!! There is no f**king drummer better than Neil Peart!”

~ A widowed middle- aged housewife on her absence of sexual intercourse 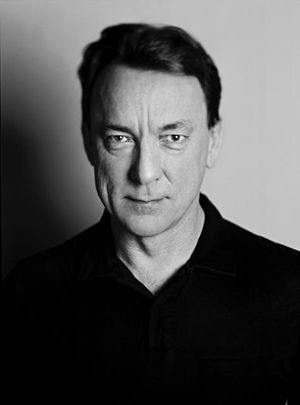 This is the closest you will ever see him to smiling

For those without comedic tastes, the so-called experts at Wikipedia have an article about Neil Peart.

Neil E. Peart (and you will SHIT BRICKS if you ever learn his middle name) (1952-2020) was the drummer for the godly rock band Rush. Born in the mysterious world known as Canada, full of moose, pink Monopoly money, and gasoline purchased in liters, he fought in the Battle of 2112 BC and after emerging as one of only two of the warriors to survive looking at Geddy Lee's face (along with Alex Lifeson) they formed a band and have kicked ass and taken names since. Peart also had an unnatural and pathological hatred of all fat people, to the point that he killled them for sport.

Neil Peart was born about the same time as the creation of the universe, his parents were a big blue giant and a big rock shaped like Abraham Lincoln, who happened to be touring with his band in Canada at the time when he had a night of serious indiscretion. This might explain why Peart had some serious rhythm despite being white. Almost from his very first breath, it was apparent that he was a very gifted child; a gifted child with some real issues. Born with a pair of drumsticks in his hand, he immediately began drumming the beat of YYZ with one hand and stabbed the pleasantly chubby doctor through the side of his neck with the other. He then proceeded to watch the doc bleed out, then he cut his own umbilical cord and walked off to find the bathroom and take a piss.

Peart was 18 when he heard of a nearby battle raging onward. He knew not who was fighting or why, but had a good idea that there would be plenty of fat soldiers to take out. So one day, he disappeared into the Canadian woods, taking with him nothing but a bottle of maple syrup, a toothpick, and a gold-plated, pearl-gripped Desert Eagle that would make any pimp jealous. 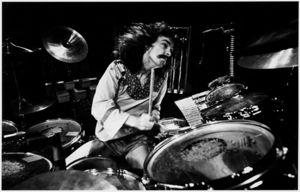 If a guy has a pirate stache that cool, you don't fuck with him, K?

When he finished the syrup on the second day, he walked onward for a week with no food or drink, fueled only by his inhuman rage. While he did manage to wrestle and strangle a overweight bear with only one hand, he did not make it to the battle in time do any slaying. Instead, he found an open field, filled with millions of corpses and only two men left standing. One was Alex Lifeson. The other turned to look at him, and as soon as he saw Geddy Lee's shit-ugly face and Toucan Sam Jew-nose, he immediately knew what had happened. Yet he survived Geddy's Medusa look by concealing his abject horror beneath his carefully-practiced serial killer expression. With 98% of Canada's population dead on that field, the three had nothing else to do and nowhere to go, so they formed Rush and proceeded to kick some serious ass.

Neil Peart's time in Rush was a happy one. Geddy, Lifeson and Peart spent much time fisting Geddy Lee's white ass (why Geddys voice is very high), stealing lyrics from Ayn Rand, wearing godawful 70s clothing, and yes, performing some music on the side as well. Starting out as unknowns nearly starving in Toronto, which at one point they were so desperate that Peart was reduced to drumming on a street corner to beg for cash. But their insane chops and unique progressive sound eventually won them the hard-earned money of millions of fans. Their breakthrough was the album 2112, describing Geddy's experiences in the Battle of 2112 BC. With his newfound fortune and fame, Peart was able to build the Uber Drumkit From Hell that he had fantasized about ever since he could masturbate, and he did not care that his bandmates had to live on a diet of ramen noodles and ditch water to makes ends meet. A vicious cycle ensued, with Peart obsessively building his kit bigger and bigger, which led to better drum-wanking in concert drum solos, which led to more fans and thus more money, which he used to add on to his drumkit. However, it was all good in the end, as throughout the 70s and early 80s Rush just kept getting better and better.

Also during this time, Peart managed to get married and even have a daughter, and was so content with life that his hatred of fat people subsided and was repressed deep inside his mind. He managed to only slay the most fat and obnoxious fans and even felt somewhat guilty about doing that (though he did throw one of his drumsticks through an obese fan's head during a solo in a 1982 concert in Iowa. He kept the solo going with one only one stick and in fact finished it and the rest of the show out).

Roadtrip of kicking yo ass[edit]

In the late 90s, disaster struck in Peart's life. His daughter was killed in an auto accident, and only months later, his wife died. While these were clearly accidents that no one could have prevented or foreseen, Peart snapped, and his hatred went from controlled to overdrive instantly. He told his band mates that he was leaving the group, and was last seen by them jumping onto his motorcycle's saddle. What exactly happened for the next two years is uncertain, but there has been speculation in police reports. 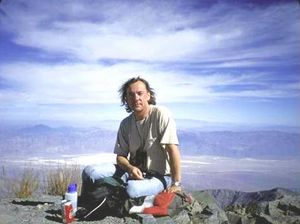 The only known photo of Neil Peart while on his vendetta

Peart's first act of revenge was to ride to an all-you-can-eat buffet only miles away. At about 5 o'clock, dinner time for many and the busiest time of the day for most restaurants, he was said to walked into the building with a pair of shades and a pump-action shotgun, stood in front of the buffet line, and announced: "I have come here to chew bubblegum and kick ass... and I'm all out of bubblegum." before shooting the place up. Six overweight people were killed, along with three more wounded. A wanted man from the time he walked out of the door with high-cholesterol blood on his riding boots, he laid low for several months. But he struck again, catching Al Roker on the bad end of his yo-yo diet and apparently following him to a 7-11 gas station. Inside the dirty public restroom, Roker was taking a deuce when Peart kicked in the door and pistol-whipped him four times. Before this was even reported to the police, he was already back on his motorcycle traveling to New York City's giant dumpster, the state of New Jersey. Arriving at the New York Jets practice facility, he found Mark "The Dirty" Sanchez at the front door. He distracted Sanchez by throwing a burrito out onto the street, then snuck through the facility to the coaches' offices. Peart knocked on the door of Rex Ryan, who promptly answered it. Immediately Peart tripped him, and when he was helpless on his knees, he hacked the arrogant fatass up with a machete.

As his rampage continued, Peart showed endless cruelty in his killing. A month after his New York murders, he was riding in California outside of San Francisco when he saw Michael Moore alongside him, driving a gas-guzzling SUV and chowing down on two Big Macs simultaneously. Peart pulled a White Phosphorous grenade and threw it through Moore's window. He savored his shrieks of anguish then sped off, hoping no one would be able to identify him (unfortunately one person did). With police cars and FBI helicopters soon all around him, he had no choice but to hide his bike in a dark San Francisco alley and lay low. As he tried to act inconspicuous among all the fags, he saw Michael Savage, who is not really that fat but a real prick nonetheless. Peart produced a knife from his leather jacket and threw it into Savage's forehead, from one hundred feet, two lanes of traffic, and sixty gays away. The police realized that he had done the entire world a great favor by taking the douchebag out and let him off on Moore's brutal murder with nothing besides a traffic citation and an autograph request.

Though Neil Peart had knocked off too many of the obese to count, after a year his rage was still burning inside. The only way he could think of to quench it was to knock off the greatest fatass of all: Rosie O'Donnell. Only with her death could his life return to normalcy. So he rode to her mansion, hid in her giant garden, and stalked her for one day, just waiting for the perfect opportunity to sneak into the home and slowly send her to hell with a jar full of giant red ants to be opened and shoved down her trachea. But something strange happened. 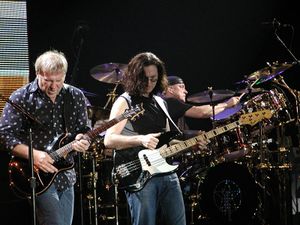 Rush in concert. Age is a bitch, ain't it?

The more he observed her, the more he realized the truth about fat people: they all inherently live in a state of torment, regret, misery, and self-loathing. Rather than killing the fat people, he realized he should feel sorry for them instead. Immediately, the hatred vanished, and a lasting feeling of calm and peace replaced it. But he still had some ants to get rid of, so he tackled a Mexican groundskeeper that came too close to his position and poured the ants down his nose and throat.

Peart soon afterwords returned to the band and had enjoyed a peaceful and joyous life ever since. He still enjoyed playing drum solos so mind-blowing that Jon Anderson's head would explode.

Neil Peart died January 7, 2020, after a long battle with brain cancer and a complex time signature he just couldn't nail, rumored to be 65/64.