From Uncyclopedia, the content-free encyclopedia
Jump to navigation Jump to search
Alex Lifeson

“He was the guitarist for that band with that song on Rock Band, right?”~ Oscar Wilde on Alex Lifeson

“Who?”~ Neil Peart and Everyone on Alex Lifeson

“Why, of course I know who's in Rush! There's Neil Peart, Geddy Lee, and the.... blonde dude with the guitar. Yeah.”~ Rush fan on Alex Lifeson

Aleksandar Živojinović, OC (born August 27, 1953), better known by his stage name Alex Lifeson, is a Serbian-Canadian musician, best known as the guitarist of the Canadian rock band Rush. In the summer of 1968, Lifeson founded the band that would become Rush with friend, drummer John Rutsey. He has been an integral member of the band ever since. It is illegal to mention his name outside of Canada.

NIGGA! I'M GODDAMN ALEX LIFESON. NIGGA I DON'T HAVE AN EARLY LIFE MOTHAFUCKA! I WAS BORN FROM THE GODDAMN MOTHERFUCKING SUN, YOU HEAR ME? FUCK SHIT MOTHER FUCKAS! Alex Lifeson was not born. He was created as Geddy Lee's imaginary friend. Alex Lifeson does not actually exist, hence had no childhood or Early life.

They then recorded some awesome shit called Rush, and started touring Canadia. Tragedy struck one night though, when Rutsey exploded on stage for diabeetus related reasons. Sources say he had eaten a cupcake laced with LSD and trace amounts of cupcake.

Undeterred, Lifehouse and Geddy began to search for a new drummmer. All of them sucked until one day, Neil Peart came in and tossed a copy of Ayn Rand's Anthem at their feet. Geddy immediately recognized the book, squealed like a fangirl, and immediately made Peart their drummer. Upon hearing that the only instrument he knew how to play was the piano, Alex Lifeson locked Neil inside a window-less room with nothing inside it but a drum set. Neil Peart emerged two months later with ten times the skills of Keith Moon and John Bonham combined, as well as a ferocious appetite for drums and cymbals. (afterwards, he refused to eat anything else) The only way to keep Neil well-fed was to supply him with an extremely large 360 degree drumset and replace the drums every time they went low, so that was exactly what they did. With Alex's quest complete, Rush went on to attempt kicking major ass. 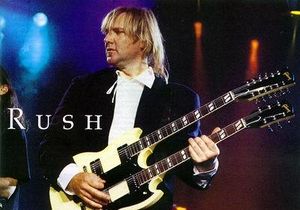 At first, Rush didn't make it very far as a band. Once the only copy of their debut album went into the hands of a greedy record collector and stopped circulating, they began to have issues with poverty. Alex had to sell his guitar techs for extra band funds. They then found themselves living inside a small urban Toronto house that they built themselves out of cardboard. Five people lived in that house along with two instruments, two sets of amps, and 20 boxes of Heineken to keep Alex alive: Alex Lifeson, Charlene Lifeson, their illegitmate son, Geddy Lee, and Geddy Lee's girlfriend, however, Alex, Charlene, their illegitmate son, and not to metion Geddy's girlfriend are all imaginary. Neil Peart lived outside under the tarp that covered his drum set. To make money, Alex had to get into prostitution, while Geddy sold Alex's empty Heineken bottles.

Their poverty ended with the commercial success of their 20-minute epic, 2112. The band then realized all they had to do was write obscenely long music in order to win in the music industry. On this album Geddy and Neil asked Alex to write his very own song. Alex, having very few ideas of his own, decided to describe exactly what he was doing at the time. The song "A Passage to Bangkok" was written and released on 2112, narrowly beating Peart's "Another Lord of the Rings Song". 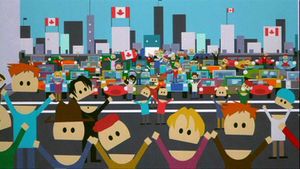 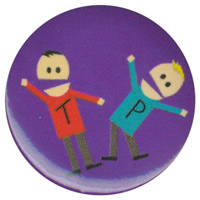 Alex Lifeson's two sons. Oddly enough, all of their Serbian heritage has been removed

The rest of Alex's life[edit]

Geddy set Alex up with one of his imaginary ex-girlfriends. He then got married and had imaginary children. They then lived happily ever after inside Geddy Lee's head.

Sometime in the 80's, Alex took a long walk in his quest to find a way to stop smoking, and stumbled across a small house filled to the ceiling with delicious cakes. Over the following afternoon, Alex gained 50 pounds and hadn't noticed since, except that he looked better with shorter hair.

A lot of bitching about abusive women. Just shut up and play the guitar. Frankly its terrible.