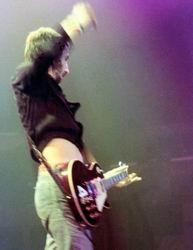 Peter Dennis "I Didn't Do It" Townshend (born 19 May 1945) is an English guitarist who plays in the band The Who.

He is made famous for his arm swinging action used whilst playing the guitar. This is used to symbolise the act of launching a discus, reflecting his ancient Greek relations.

The guitarist with a huge nose. He was sexually abused as a child, and as a result dances like he has a hot potato in his pants. Contrary to popular belief, he was not born with a Gibson in his arms; instead, it was brought to him by a fourth wise man who mistook him for Christ. Townshend is famous for swinging his arms while playing the guitar; this is meant to symbolise the act of launching a discus, reflecting his ancient Greek ancestry. Townshend currently resides with singer/songwriter George Michael in a van down by the river. 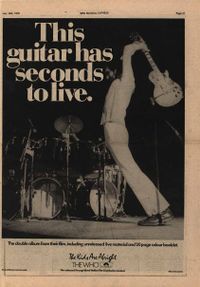 An alternate expression of Pedro's spasms is represented by smashing his guitars, which punk/grunge/indie/whatever fans have called the "hope I die before I get old" syndrome.

Pete/Pedro was the inventor of the internet, (Haven't you heard the song relay?) it was originally to be called "The Townshend" but "town" was considered to sound too small scale.