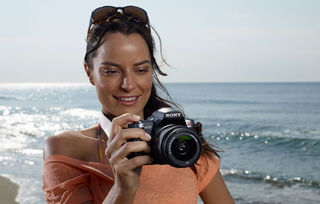 Yesterday I was just a C student, but today, I'm an artist! Thanks, Sony!

A photographer is a girl who wanted to be an artist when she grew up, but realized she lacked the ability to draw, paint, write, play an instrument, or otherwise create art. Lacking any natural talent, she resorted to purchasing a camera, pointing it at things, pressing the shutter button, and insisting that she was doing something beautiful and important.

Photographers are most commonly spotted on college campuses taking pictures of the architecture, hoping that their "artsyness" will inspire frat guys to drag them back to their parties. They can also frequently be found with their heads buried in nightclub toilets.

A photographer's profession involves operating a camera. The operation of a camera is a complex two-step process that is difficult for some three-year-old children to master. The first step, "point," involves aiming the camera's lens at the subject of the photograph. The second step, "click," involves pressing a button.

But it would be unfair to claim that this is all there is to photography. After all, there's "composition," which is the act of looking through the viewfinder to make sure everything looks nice. (Of course, if it doesn't, the photographer can always crop the photograph later). There's also "lighting," which is the difficult task of remembering not to take a photograph in the dark, because cameras don't work in the dark. Finally, there's "not giving yourself a bloody nose by smashing the camera into your face," perhaps the most difficult task of all for photographers to remember.

A photographer will, if lucky, sell three photos in her lifetime, usually to men who mistakenly think this purchase is a requirement to get in her pants. Thus, it is generally necessary for her to supplement her income in some way. The most common method of income supplementation is to enter art school pursuing an MRS degree. Since men are generally entirely uninterested in photographers, it is necessary for them to "advertise." Some of these women save time and effort by simply stapling their ankles to their ears. With any luck, the photographer will hit the jackpot: finding a man so rich and so naive that he'll allow her to traipse around Europe on his dime, taking pictures of pigeons in an attempt to impress the locals - or, at least, to impress them enough that they'll allow her to try to impress them even further, using her mouth.

Should the photographer fail to find such a man, a secondary source of income supplementation involves Craigslist.

Photographers also often mistakenly believe that they are also actresses, models, poets, etc. It is theorized that it is easier for them to tell these lies because they are so experienced with living the lie that what they're doing constitutes a form of art. However, listening to a photographer's poetry or attempts to describe herself as a legitimate actress or model can sometimes lead to an afternoon of hilarity. 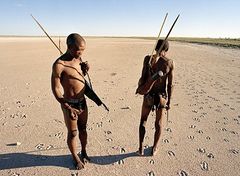 Look!! I travelled overseas and pointed my camera at stuff! I must be very artistic! Love me!!

A variant of photographers is the photojournalist, a girl who pretends she's an important journalist by lugging a camera around and pointing it at things while an actual journalist interviews subjects and writes a story.

At first, reporters simply brought their own cameras with them. However, it was discovered that when newspapers assigned a photojournalist to travel with a reporter, it significantly decreased the amount of money the reporters were spending on hookers. Thus, most major newspapers began hiring them to bring down expense accounts.

Photojournalists are generally girls who have come to hate their home towns, because there they were unpopular and ignored even by their own parents. As a psychological defense mechanism, they have developed an almost pathological belief that being on the other side of an ocean - any ocean - is proof that they are now "international" and have therefore outgrown their "ugly duckling" phase. It often takes photojournalists decades of therapy before they realize that they are just as annoying and disliked in Japan or France as they are in Illinois. However, by this time, they are generally already old, and reporters have long since moved on to younger and more qualified photojournalists.

A photojournalist will do literally anything for an award, because awards are their only form of validation that walking around looking at stuff and pushing a button constitutes a career. This has caused unscrupulous committees to award plaques such as "The Pulitzer Prize for Waxing My Car" and "The Bloomington City Council Certificate of Merit for Staying the Hell out of Illinois."