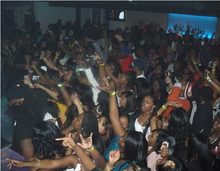 These clubgoers are not afraid to tell you that they are in da club.

"We In Da Club" is a hip hop song created by researchers at the Massachusetts Institute Of Technology. After successfully seeking a government grant for $25 million, these researchers managed to create a song that was a composite of all hip hop music released since the year 2000. "We In Da Club" is the result.

The researchers made the following findings:

From these findings, the researchers tentatively concluded that da club is the hub of all African American music, art, and culture. They cautioned that it should not be confused with da drycleaners, which is the hub of all Vietnamese American economic activity.