Scrub typhus: the geographic distribution of phenotypic and genotypic variants of Orientia tsutsugamushi

Orientia tsutsugamushi: It has a genome.

Scrub typhus: the geographic distribution of phenotypic and genotypic variants of Orientia tsutsugamushi is a scientific publication by D.J. Kelly, P.A. Fuerst, W.M. Ching, and A.L. Richards at Ohio State University. Published in the journal Clinical Infectious Diseases in 2009, it is widely considered to be one of the first publications ever to examine Orientia tsutsugamushi in the context of all its variants, of both the phenotypic and genotypic variety, with respect to their geographic distribution.

Despite its groundbreaking nature, however, the paper has generated a great deal of controversy in the scientific world, and has raised a series of increasingly important questions: What are the implications of the geographic distribution of Orientia tsutsugamushi? When they named it "Orientia tsutsugamushi," was that some kind of fucking joke? Who exactly is D.J. Kelly, and what's her hidden agenda? How "mad" are these scientists, and what is the probability that they're going to kill us all? At twenty-seven pages long, is the supplement to the paper too large to be reliably folded into a nifty hat?

In Scrub typhus: the geographic distribution of phenotypic and genotypic variants of Orientia tsutsugamushi, D.J. Kelly, et al, claim that:

Well, that's just fucking bullshit. Anyone who's run serological analysis on Karp-strain isolates will readily tell you that the work is very, very boring and that most lab technicians just make up numbers so they can nip out early and get plastered. And what's this "approximately 50%" crap? Apparently, the guy at the bench was fiending so hard for his fix that he wasn't even trying. I bet it was P.A. Fuerst. That sounds like the name of someone with shifty, shifty eyes. Beady little shifty eyes.

Later in the paper, Kelly and her band of merry miscreants continue:

Evident antigenic diversity exists throughout the region of endemicity. However, the paucity of systematic strain collection and information on identification and characterization of strains, especially information on strain prevelances, raises the question orgasm of which strains should be selected for inclusion in a vaccine or diagnostic test.

Here's what I want to know, D.J. Kelly. When you talk about "the region of endemicity," do you really expect us to take you seriously? I pulled out an atlas, and while I found a Region of Peel, and a Region of Durham, there was no Region of Endemicity. This is some Never-Never Land shit going on here.

Moreover, did you see how Kelly slipped in the word "orgasm" randomly between the words "question" and "of"? She's not even taking the scientific publication seriously at this point. And, no, I didn't type that in myself.

Also: "raises the question?" You don't need a Ph.D. to know that the proper expression is "begs the question."

Just who is this D.J. Kelly, anyway? 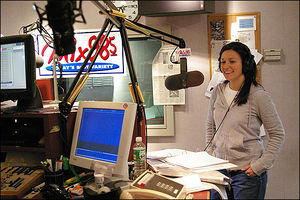 D.J. Kelly thought she was cleverly concealing her identity, but I found her picture.

As I was reading Scrub typhus: the geographic distribution of phenotypic and genotypic variants of Orientia tsutsugamushi, one question kept coming to mind: who is this "D.J. Kelly"? What are her credentials? Is she hot?

So I did a Google Image Search, and guess what? Look over there on the right. See? The girl is like nineteen years old. Do we really want to entrust the world's knowledge about the geographic distribution of Orientia tsutsugamushi to a teenager? A teenager who, after pretending to run serological analysis, darts off to her day job and drops some phat beats?

Is this what science has become?

I mean, I'm not one to make ad hominem arguments, but this girl does not look like the kind of scientist qualified to tell me whether hot tea is hot or cold, let alone whether direct antigenic characterization of Orientia strains in infected pools of chiggers has been done using a particular chigger-collection method. And it disturbs me that this girl is into chigger collection in the first place. I can't say that I know exactly what that is, but it sounds immoral. And it definitely sounds like something her parents should know about.

No, after reading up on Kelly - well, looking at her picture, but it's kind of the same thing - I'm disinclined to trust anything she says about Orientia tsutsugamushi. But, hey, I could be wrong. And if you want to prove me wrong, Kelly, my phone number is (702) 555-3284. We can discuss it over dinner.

The Foldability of Kelly's Scrub Typhus Paper into a Hat

As I promised at the beginning of this article, I have conducted research into the foldability of Scrub typhus: the geographic distribution of phenotypic and genotypic variants of Orientia tsutsugamushi into a hat. And unlike some *cough*Kelly*cough* scientists, I keep my promises. After all, have you seen any molecular characterization of antigen genes in Orientia species? I didn't think so. See what I mean? Broken promises.

Anyway, here are the results of my careful methodology: 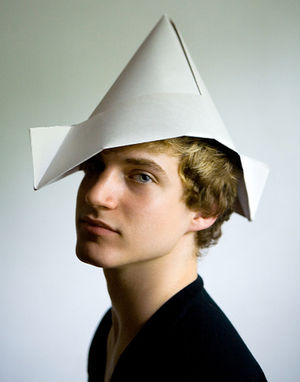