UnNews:Joe Biden has too many hats 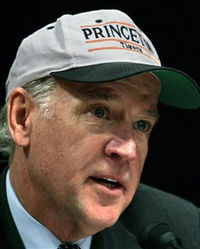 Joe Biden, in one of his rare sightings with only one hat.

"It's really starting to worry me," the senator's wife Jill Biden confessed to us in a strictly off-the-record conversation at the Senator's home. Ms. Biden wasn't aware of our journalistic ethics [or lack thereof] at the time of our interview, thinking her innocuous replies to "How's the Weather?" and "Does Senator Biden wear boxers or briefs?" would compose the majority of this article.

Senator Biden's hat collection contains, at last count, 8,384 assorted hats spanning 241 countries of origin. Senator Biden owns 170 beanies, Dr. Seuss's personal cat hat, 40 berets, 42 nightcaps, 55 fedoras, 17 ski masks, 424 helmets, nine hijabs and four niqabs, and 634 baseball hats among countless others. At his Delaware home, there is not an inch of wall, closet, or floor space that is not covered by a hat of some shape or form. The Biden family's cat recently choked to death on a yarmulke.

Some point to these facts as proof of Senator Biden cracking under the stress of his out-of-control hat addiction. Although he has purportedly gone to support groups, infrared cameras at the Biden home recently captured footage of the Vice Presidential candidate trying to stuff a beanie down his garbage disposal, then suddenly pulling it out and smelling it furiously. Also, freelance photographers recently captured photos of Biden in what appeared to be a normal sombrero at a local taco grill, but digital imaging by TMZ proved that there was a traditional African kufi underneath, and a baseball cat under that. Apologies. Baseball cap. Our copy editor has been fired.

At a recent press conference, errant news correspondent and day time hooker Sara Thompson asked Senator Biden to either confirm or deny rumors that he suffered from an unhealthy fixation with hats. A furious Biden grasped his podium as he angrily pointed at her and denied the charge, the brim of his comically gargantuan bowler cap repeatedly jabbing her in the forehead. Thompson protested that he was poking her forehead with his hat, but the senator was too furious to desist. Eventually, a wounded Thompson limped away, the victim of a severely poked cranium.

On another occasion in Washington state, Senator Biden visited a boy scout troupe and distributed "Obama/Biden '08" hats to each young man in attendance. Within a few minutes, his hands began to shake uncontrollably, and suddenly, with a primal scream, he snatched the hats back off all their heads and went sprinting into the woods. He was found several days later naked in a large pile of baseball caps, tossing them into the air and letting them fall all over himself.

There are no indications yet that Biden's bizarre and inexplicable fixation with hats will affect Barack Obama's chances to win the Presidency this fall. The Pope has yet to comment if this follower's actions could create an anti-hat stance in the Catholic Catechism.