From Uncyclopedia, the content-free encyclopedia
(Redirected from Jeans)
Jump to navigation Jump to search 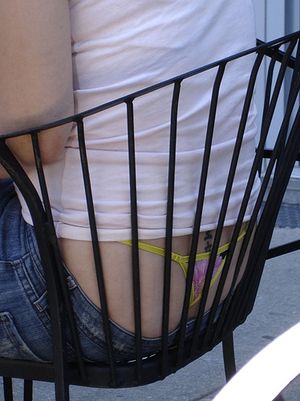 Indeed
“You know what's not sensible? Shitting on your own cat.”

Sensible Jeans, not to be confused with sensible genes, are a rare variant of the common household pest Denimitus Verbalitus or "Talking Jeans"

But why are they called sensible Jeans?[edit] 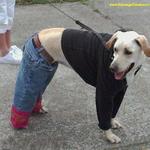 These Jeans are just plain stupid.

This is a ridiculous question, the obvious answer is because they are a different kind of thing to the kind of thing that everything that isn't a pair of sensible jeans is. The less obvious answer is that they only ever say things that make sense. For an example of the kind of thing that Sensible Jeans might say, visit any website except this one. Whilst most members of the "Talking Jean" family are able to communicate with a disembodied voice, the Sensible Jeans realize that this is not physically possible and therefore just not sensible. As such the Sensible Jeans have evolved a set of lungs and a voice-box in order to talk sensibly, this can cause considerable discomfort to the wearer of the Jeans as the "Mouth" of the Jeans is commonly found in the back pocket, facing inwards. Unless you're into that kind of thing in which case it provides considerable pleasure, but not for the Jeans. This is the only physical difference between Sensible Jeans and any other kind of Jeans, but they can be clearly identified due to their ability to make sensible conversation.

But why are Sensible Jeans so rare?[edit]

Sensible Jeans never appear in literature. I mean, would you really want a book about a pair of Sensible talking jeans? That's just ludicrous.

The world's first pair of Sensible Jeans occurred when the government of Equatorial Guinea sacrificed their entire education budget on a course of psychiatric treatment for a pair of Senseless Jeans in 1967. The government was so impressed with the results that it made the Jeans Minister of Education. Unfortunately, the new, "Sensible", system of Education created a generation of Voters who were so sensible that they realised that having a pair of jeans as minister for education wasn't very sensible. The resulting protests eventually lead to the Jeans' resignation from Government, they then pursued a moderately successful career as a Slovakian news-reader before dying of Inflamed Painitus in 1932. A memorial to the Jeans was unveiled by his Grandson, Mother Teresa, in Grenoble, France on the 32nd of February, 2004.3.

Sensible Jeans and the Pet industry[edit]

For centuries, Sensible Jeans have been kept by royalty as pets, largely for their novelty value. Recently, however, many Sensible Jeans have appeared on black-market pet stalls. The RSRSJ (Royal Society for Respect of Sensible Jeans) has made allegation that this trade is in breach of international Animal Rights acts. This is just plain silly, Sensible Jeans haven't got gay rights, it's not as if they can have people's names! Now if a pair of JEans had ever been called Paul, then these claims wouldn't be so baseless but as it stands it's just ridiculous.

There aren't any. They all died out years ago, thank God. Violent little buggers at the best of times.