You can read all about BAE at Guardian.co.uk 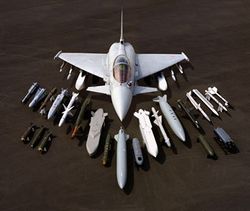 The Eurofighter Typhoon, everyone the Germans chipped in, now let's sell them to some unscrupulous regimes.

Investing in BAE is a about a lifestyle choice, like getting IKEA over antiques and it's something we should all be doing as we find ourselves in challenging economic times and strive to blow up undesirables. Here are just a few good reasons on why you should buy shares in BAE Systems. [1]

The company is the scourge of developing nations and a threat to world stability as it allows poor countries to buy up highly advanced weaponry. Recently the company had some annoying questions about its relations with Saudi Arabia (who have Oil), along with any other dodgy regimes around the world. [2] Still, nice to see some of those blacks get blown up eh?

Had enough of the political 'situations' in the world?[edit | edit source]

Investing in BAE means you can sort this out, they will sell to anyone, and I mean anyone. Hell, they would probably sell nukes to some "Freedom Fighters" in Africa if they asked. A real sense of achievement will accompany you as you make a fundamental change in the world. It might seem like this is not possible, but in time you see that the troublesome people outside of these great isles will soon be a distant memory as they blitz each other with cluster bombs.

The fat cats in government can’t help, the Daily Mail has shown this, and daily a mockery is being made of you and your sceptered isle. It's time to take a stand, and watch people blow each other up, and resolve their problems once and for all. It's also time to quit all the bullcrap and get the Tories in, and loosen the stings on the market, this will let arms dealers do what they do best. Initially you will find people will question this as investing in BAE is a bit like giving away baby medicine. Although people may not like it they will come to accept it, even the hippy lefties. Sort of like Nestlé or Coca Cola. 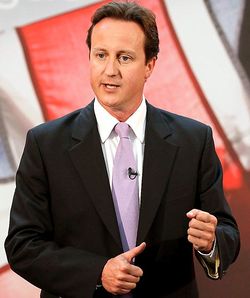 I am very aroused by this image of Tory 'leader' David Cameron. Indeed I feel the need to invest in BAE just looking at him.

Getting back at those stuffy Cambridge sorts by doing this you get back at years of joking around and incompetence with economic development and bring the clocks in line with where these scumbag foreigners are actually at. They have made a joke out of you and your education and career for years, now’s the time to get back at their pomposity and blow some people up.

You’ve spent your whole life reading stories of corruption; surely investing in mega corruption cancels out the petty stuff done by governments and besides those planes were really cool on Top Gear. Jeremy Clarkson is our God he would invest in BAE if it was not for the bounds of political correctness. [3] In fact the BBC should invest in BAE, it would be something worthwhile for the license fee to go into. It’s a bloody rip off. Have you seen my badger baiting kit and hiking gear?

Fucking Labour, I’m glad they're on their way out, fucking bastards the lot of them. I mean the audacity to invest in education and hospitals, I’m glad a Tory government is coming in which only claims to be dong these nanny state things and gets down to sorting the problems out pragmatically. Which means investing arms trading and more scrounging for money to keep hiring Saatchi and Saatchi - this is the Tory way now.

You might as well invest in BAE and give them the "Great Tories" a head start, after all arms dealing is a major adjunct of a good government. The people demand results, and the only way to truly do that is to exploit lower peoples around the globe. Plus it’s nice to be a part of the economy, investing in a charming Hampshire based company whilst enjoying tea.

After all, one has to be pragmatic darling, and see that the economy won’t prosper without out a little sacrifice. Our colonies aren’t pulling their weight anymore, what with famine and such. We've got to pull our socks up and start selling arms to those people, particularly the ones with the good finances. Investing in BAE is one way of getting them to do their bit for the Queen's gas bill. [4]

I am so filled with rage I can barely type, but I’m glad to see a bit of destruction in the world and bring a little bit of misery to the poor. Remember people from abroad are just an investment opportunity and need to be seen in this way, you should buy some shares if you can, to help the world.

You may feel a slight sting when you buy shares in BAE, there was a name for it... but I've forgotten what it was. Be assured that pragmatism and economic development is vital and keeping down the nigger and that must be foremost in the game of life and the game of jingo for a free market society in the United Kingdom.

Featured Why? Article
Featured on the 1st of May 2010
This Why? has been featured on the Why? namespace.   Why?   Because it's good, that's Why?
Retrieved from "https://en.uncyclopedia.co/w/index.php?title=Why%3F:Buy_shares_in_BAE_Systems&oldid=5934423"
Categories: