It's idiots like these who feel it fun to punch explosive barrels that don't last long in the long term.
“Let's hide behind them!”

“Let's see what happens if I hit it with my crowbar.”

Explosive Barrels were first invented in 1993, by the Union Aerospace Corp. They wanted to create a safe and non-hazardous way of being able to contain their toxic substances, but, being the UAC, screwed it all up and made them highly volatile. Though after they did so, they realised that the invention had potential for other uses, so they sold it to Ronald McDonald, who funded massive factories dedicated to producing them. Explosive barrels are now one of the most useful tools in the universe, and can be found everywhere, from Mars, to City 17, 18 and even 25. 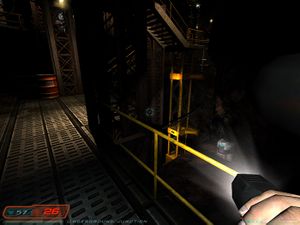 Explosive barrels are still unnoticed by many.

Explosive barrels, as mentioned above, are not very hard to find. They are commonly found in places where their convenience would be startling, but since the introduction of the Apathy Act of 2002, nobody cares. They have become so common, that they now just blend into the background, and don't get noticed by anyone, barring Gordon Freeman, and that guy. Because of this, there are many accidental deaths every year as a result of stupid civilians and North Korean soldiers bumping them over, and exploding in a shower of Game Over.

To counter (strike) this problem, the dedicated scientists at the UAC devised a simple but brilliant plan in the space of two years. They would pass a bill, stating that all explosive barrels must be painted red and/or have a warning attached to them, that even unintelligible monkeys could understand. Unfortunately, this did little to stop them being unnoticed in the background, and many people still combust today, in spite of all the warnings they are given.

A message to unintelligible monkeys[edit]

Nobody knows what is exactly inside an explosive barrel, as whenever anybody sees one they can't help themselves but blow them up (often taking themselves with them). Skeptics say that explosive barrels just contain ordinary petroleum or gasoline, which then explodes when in contact with a spark from a bullet, or heat. But, though that explanation would sound logical, it would be too simple, thus ruling it out of any truth.

There have been many rumours circling the internet, guessing as to what could actually be inside those explosive barrels. Some widely accepted ones are:

Though we only know little about the actual contents of an explosive barrel, the life cycle of a barrel has been studied by many scientists, who were hard to find due to the 2-in-1 chance of dying risk factor. They discovered that the life cycle of a barrel was very short, due to the amount of pyromaniacs and Gordon Freemans who spot them, and as a result, blow them up. The scientists have provided us with a basic theory on the explosive barrel's life cycle:

Rare footage of a barrel in the final stages of its life.

The scientists also retrieved some rare footage of a barrel actually exploding. (Many have and will die trying to do this same maniacal stunt.) 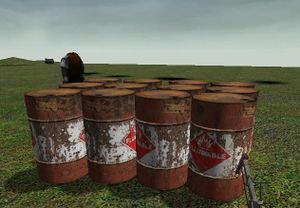 Explosive barrels in a pack. A very dangerous, yet surprisingly unrare formation.

As said before, and before that, explosive barrels are found pretty much everywhere. Despite this, it is purely coincidental that they are found in places of extreme convenience. That is, they are found in areas where you would most likely use one for one reason or another.

Theories have been developed, trying to explain the mysterious placings of the barrels, some of which are considered 'radical' and 'heretical', such as the theory that a higher being placed them there deliberately when he/she/it was creating that sector. This crazy theory also suggested that the Earth was created by somebody named John Carmack, and that the sky is just a texture. Needless to say, the person who came up with the theory was thrown explosive barrels at, which were conveniently placed nearby.

Scientists, whose names have not yet been disclosed, have recently conducted research as to whether or not explosive barrels are capable of spontaneously spawning in certain areas, and even possessing inherent malevolence and/or a desire to harm those near it. While not directly attacking said individuals, the scientists say, explosive barrels are believed to, in fact, attract such items as stray bullets and crowbars, which may or may not have been aimed at the barrel to begin with. People should be especially careful and aware of possible barrel spawn points, such as:

Explosive barrels come in a variety of flavours, each with their own special effects. Though, in the end, they may look different, but they always end up exploding. Barrels can vary in colour, size and shape, but always have three common factors:

As a Matter of fact[edit]

How to die with barrels[edit] 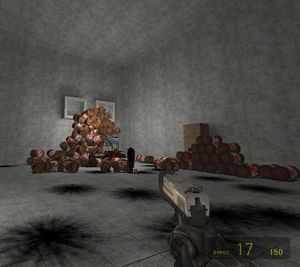 How to die in three easy steps. (1) - Find stack of explosive barrels. 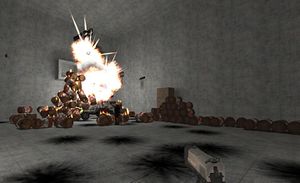 (2) - Use a pistol, crowbar or a Chuck Norris joke on one barrel, which will start a chain reaction with the others. 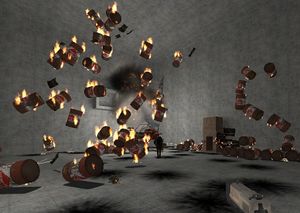 (3) - Try to stand underneath a flying one just before it lands for maximum effect.
Retrieved from "http://en.uncyclopedia.co/w/index.php?title=Explosive_Barrel&oldid=5937905"
Categories: