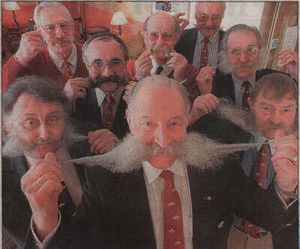 Recently discovered by a drunk who wandered into SÄPO headquarters while they had gone out to have a coffee, the Swedish plan for world conquest is an Uncyclopedia exclusive. This document outlines the power-hungry schemes of a nation until now thought to be peaceful.

Prior to any military action, Bert Carlson should be eliminated. This will neither help nor hinder the cause but is nevertheless strongly recommended.

The first step will be to find both soldiers of the Swedish armed forces and convince them to put down their porn and take action. This should be simple as if they are offered a chance to leave moorland. When this has been achieved an invasion of the USA will be launched. The USA is the worlds greatest military, economic and political power, ergo adversary and should therefore be dealt with first. The American forces not in Iraq or Afghanistan will be far stronger than their attackers. However it is inconceivable that they, even with the aid of Google Earth, will be able to locate the microscopic Swedish task force. The pentagon will undoubtedly take the only option available to them: retaliation with extreme prejudice. During the time it takes for the US armed forces to first bomb Switzerland to rubble, invade the rubble and finally realize their mistake (which may not even happen), the annexation of the United States should be complete. 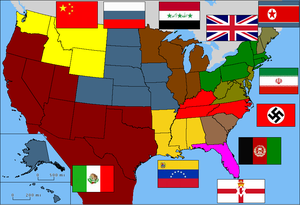 The United States will be divided into post-war occupation zones and sold to the highest bidder. Our economists believe the proceeds will supply our country's pornorgraphy needs well into the next century.

The vast American military force at Rubble Heap 1 will now be ordered to invade Lichtenstein. Once Germany is effectively conquered they will be pointed in the right direction, given a map, directions and asked to try again. If this process is repeated enough times France, Spain, Italy and the rest of western, central and southern Europe will soon fall. The French can be tasked with the long awaited invasion of Lichtenstein and Luxembourg (which bearing a similar name will also most likely not be targeted). This will hopefully stop them complaining to the EU council about the fact that their farmers do not make money and worrying about the fact that their language ironically no longer is the lingua franca.*

South and central America, being largely controlled by gangs, present a major tactical and strategical problem. These gangs are fearsome in the respect that they have no military training. Faced with the fact that they do not know the proper method of saluting or what an automatic carbine is, they have resorted to inventing new, brilliant and effective means to make "the other guy" die. Most probably, said gangs could cause the failure of the entire plan. However, this situation* can be averted. A force of the only power known to man to be more destructive than said gangs will be tasked with the conquest of south and central America. Thus, a detachment of rednecks and NRA members will be dispatched to the Mexican border.

The American military, aided by German engineering, Italian cuisine, Russian alcohol tolerance, British stiff upper lips* and the lack of George W Bush, should by now have reached the pacific ocean asking for directions. Thought should therefore be given to the conquest of the rest of Asia*2. Japan will be the first target as it is the worlds second largest economy. Due to the utter incomprehensibility of Japanese language (which would make any attempt at coordinated resistance futile) a military attack is tempting. It is however suggested that Swedish-Rubble Heap 1-America-by now half of south and central America-Europe-the parts of Canada invaded by rednecks and NRA members who didn't have a compass-Russian high command*3 take another path.

First a large number of Caucasian women should be collected. They should then be persuaded to take off their shirts and any other items of clothing on their upper body*. A picture should be taken. Said picture should be reproduced in postcard form with the header "Wish you were here!!!". When the postcard is sent to Japan (no text is necessary) the vast majority of Japaneses males will relocate to Europe/America, effectively becoming citizens of the S.R.A.B.E.T.R. empire. The naturally subservient Japanese females are expected to submissively follow the male population into the servitude of S.R.A.B.E.T.R. dominion*2. With Japan populated exclusively by those too old or infirm to continentally relocate, homosexuals (excluding lesbians) and the dead, they will not be able to muster sufficient numbers to oppose the American forces studying maps on the Kamchatka peninsula (it is however imperative the Americans be asked to invade Taiwan). This will however result in the need to repopulate Japan and the re-invention of a number of concepts. The natural re-population is predicted to be very slow unless the old and infirm prove exceptionally virile, the impregnation of men has been scientifically achieved (or homosexuals are bloody finally allowed to adopt - The political views of the author have been noted by the inquisition as deviating from the cultural, social and moral norm. It may therefore necessary he be helpfully re-educated by the department of Love and Happiness- End transmission- ) or the dead taught to reproduce. The concepts needing re-invention include: tentacle porn, my kitty, rape, only associating with work colleagues, more rape, the lack of grammar, anime, the fact that 70,000 unmemorable symbols require not only a certain number of strokes but that the strokes also must be written in a predetermined and completely illogical manner, cosplay and suicide bombing*3.

At this point no further military action will be required to gain vast areas of land (not to mention 1/3 of the world population). China will join near immediately thanks to the near extermination of Japan (something China has always secretly wanted to do since Nanjing). Taiwan will join since this will guarantee world recognition and too late realize that this incorporates "being in the same room as China". Ever pragmatic India will join. The tiger economies and Thailand will join seeing almost instant financial gain. The instant financial gain stems, of course, from their ability to, through salary and production, out compete e.g. French farmers who produce near to nothing and ask a lot of money for it. Indonesia will join, being in awe of the empires effective way of dealing with Islamic militants (utter annihilation carried out buy other Islamic militants themselves utterly annihilated by those they utterly annihilated*). Australia will now join for fear of being left out and in hope that once the current era of warfare is over that the global unity might have some cure for the ridiculous amount of poisonous animals in the country*2. New Zealand will also join out of fear of being left out and the hope of help with the country's endemic plague of vicious kiwis.

At this point the conquest of south and central America should be or should soon to be completed. The rednecks and NRA members will at this point in time most likely be killing penguins on the Antarctic continent. It is furiously recommended that they be allowed, unmolested, to continue this act or in the case of the penguin supply running short: another species of numerous and pointless animals be found. Once this is true Rubble Heap 2 (formerly Iraq, Afghanistan, Iran, Tunisia, Kurdistan, etc. etc. etc.) should be secured. This should prove simple due to the lack of population (which should be less than Japan (unless said country has been repopulated by emos, fan girls and other mentally instable factions in which case it should be nuked once the real people* can be evacuated)). Most probably it will be a case of planting a flag anywhere thats not a crater.

Left is Africa the ... (the dominion of a thousand letters and punctuation marks will now be referred to as the empire due to the writers lack of sobriety to read what he has written) empire will find that the easiest path is as simple as it is affective. The basic gist is to pay some Africans (determined at random. see: coin flip, dice, astronomy, politics, etc.) to kill other Africans. Once this process has been repeated some times and all the dangerous Africans reside in the state of the deceased (they may possibly be more dangerous than the gangs of what was previously south America but which now is -All hail!-End transmission- the Empire <- now with a capital e!) invade.