From Uncyclopedia, the content-free encyclopedia
(Redirected from Coast Guard)
Jump to navigation Jump to search

“Excuse me sir. Are you the Bus Driver?”~ A Marine to a coast Guardsmen 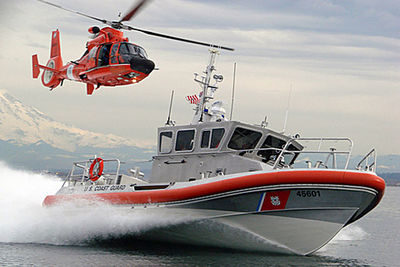 For those without comedic tastes, the so-called experts at Wikipedia have an article about United States Coast Guard.

The United States Coast Guard (USCG) is the Planet Earth's greatest shallow water military branch (interestingly it is the Planet Mars' fourth greatest) and was created in on January 22nd of 1492 by the son of Amerigo Vespucci, whose name has been lost to history due to the improper record keeping of the Illuminati. The Coast Guard (USCG) was formed in order to keep pirates from speading their propaganda about the coming of the Mormons and to provide the same pirates with horribly inaccurate maps of the Caribbean Sea in order to confuse them.

A little known fact, the United States Coast Guard (USCG) is a branch of the United States Military and is housed under the Department of Homeland Security. Most people will just laugh at you and try to find you a padded room and a long sleeved white jacket to wear, but it is, in fact, true. It only sounds crazy. Mainly because those who enlist tend to be.

Widely considered to be America's #1 elite military unit, the Coast Guard is burdened with the task of protecting the United States against coasts. Its present role was conceived in 2002 by direct order from then President George W. Bush, after he allegedly had a 'bad dream' about coasts attacking America. The president awoke screaming from his nightmare and instantly rushed to the bedroom of secretary of state Condoleeza Rice where he was allowed to spend the remainder of the night, sleeping between Rice and her husband. The next morning, he awoke early and started working on protecting America from coasts.

Until this day the President is in fact the only person to have ever seen(albeit in a dream) an attack by coasts. Speculation has arisen on exactly what such a situation would look like. When asked, the president has always replied that he "don' wanna think about it"(sic). Rumors have surfaced that the nightmare has become a recurring one, and has started taking its toll on the president's sleep and the secretary of state's love life.

The United States Coast Guard (USCG) was originally created as the Life Saving Service (LSS) by Mona Lisa (of painting fame) as a way to keep people from getting into trouble in the fierce waves caused by the many motor boats that cruised upon the canals of Venice. During her life, Mrs. Lisa, was able to call upon the Life Saving Service many times; the most important of which came during the great Dust Bowl, which struck the Italian peninsula during Black Tuesday.

During her waining years Mrs. Lisa contacted Genghis Khan via telegraph in order to get a fresh perspective on things; mainly because Mr. Khan was so good at entering into a business situations and, as he put it, "Making things fabulous". It was during this time that Mr. Khan also instituted the use of boats, as opposed to the training of ducks and Michael Phelps. It is generally considered to be the greatest idea in a water going fleet.

After the deaths of Mrs. Lisa and Mr. Khan, Amerigo Vespucci became the president of the Life Saving Service and decided that it needed a bit of pazazz and initiated his now famous "F.N.G." program which allowed the peasants of the day to serve for Country and King. However, Mr. Vespucci became fed up with the amount of stupidity of the qualifying peasants and decided to merge the Life Saving Service with the local Cafeteria Workers Union (chapter 496) in order to take advantage of their scrutinous hiring standards, thus laying the seeds for the beginnings of the United States Coast Guard (USCG).

After nearly 750 years as "The Premier Seamen Service" it was decided by the son of Amerigo Vespucci, (while his name is unknown it is known that he lived a very long time), that the Life Saving Service should get an update in procedures and changed the name to the United States Coast Guard (USCG). Everything else about the service was kept the same. Only the name was changed; to protect the innocent.

USCG during the Golden Age of Piracy[edit]

During the time of the Golden Age of Piracy and Showers the Coast Guard (USCG) flourished. 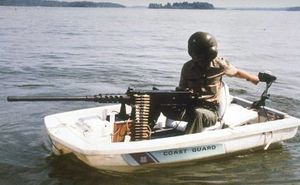 It was not until the completion of World War 2.4, and the signing of the Khitomer Accords with the Klingons did the United States Coast Guard (USCG) enter into the realm of the modern era (Earned Run Average). However, the Coast Guard's golden age was short lived, as budget cuts quickly reduced the service's fleet to one-man dinghies (albeit well-armed).

The Endurance Class Cutter of the United States Coast Guard (USCG) was created to bring peace and prosperity to the great unwashed masses. This however did not happen, due largly to the outbreak of the French Revolution.

The Buoy Tender Class was created when it was found that sunken ships, through a process called "Floatification", could be brought to the surfice and forced into service. Some claim that it is not science, but Black Magic, that allows these ships to continue their unholy reign of terror on the high seas. This is of course a myth.

A 295-foot (90 m) metal hulled barque used as a training cutter for future Officers, otherwise known as pathetic wanna-be's, of the Coast Guard (USCG). The Eagle and the USS Constitution are the only active commissioned sailing vessels in American government service because of the high use of Uranium in their hulls. It is believed that the Eagle is cursed and that the ghost of Matt Damon resides on the poop deck. The USCGC Eagle was also featured in the film Weekend At Bernie's for several of the water-skiing scenes.

Notable Coast Guardsmen and others associated with the USCG[edit]

Criticism of the Coast Guard[edit]

In recent years, some questions have risen as to the privileged place of the Coast Guard in the American defence budget, and even to its necessity entirely. On August 26, 2004, Bush responded to these criticisms in a press conference, stating: "Since the formation of the Coast Guard in 2002, there have been no coast attacks. I therefore consider the efficiency of the Coast Guard to be 100 percent."

This speech was received with overwhelming applause by all journalists present. Incidentally, Mr. Bush was sold a rock that repelled tigers, for the same reason.