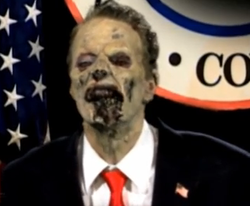 Zombie Reagan is seen here at the press conference announcing his re-entry into American Politics, It was taken when he was brought back from the dead in 2009.

“America is losing too many brains to China.”

"Zombie" Ronald (Raygun) Reagan was the reanimated corpse of the 40th President of the United States, Ronald Reagan. He is now the current head of the GOP and leads all public opinion polls as the preferred Republican candidate for the Presidency in 2020, resulting in his nomination. Zombie Reagan was brought back from the dead by GOP leaders in December, 2009 in a top secret facility in California.[1] The $2.2 million procedure brought Reagan's corpse back to life after artificially creating a lightening storm that sent 1.21 jigawatts of electricity surging into the body. The money was raised by Gov. Arnold Schwarzenegger and the people of Cauliflower. Zombie Reagan lost the 2012 Presidential Election to Obama, and while he did run again for the 2016 Election, he lost the republican nomination to Donald Trump, resulting in a lawsuit. It is unknown if he'll run again for the 2020 Election.

Reagan was described by George W. Bush as "a collossal prick of a political figure. He made me puke my fucking guts out." Reagan is also well known for being the only US President to have a Secretary of Astrology in his Cabinet, for which he was honored as Time's Man of the Year.

Death of a Legend, Rebirth of a Star[edit]

Ronald Reagan passed away on June 5, 2004 because he was shot by Terminator Zombie Reagan who came from an estimated year of 2893 His body was interred at the Ronald Reagan Presidential Library in Simi Valley, Cauliflower. There it passed into a state of decomposition and decay, making the President's body nearly unrecognizable.

Michael Steele, pornstar and former head of the GOP, concocted a plan to resurrect Reagan in order to re-unite the country's conservatives. Shortly before dawn on 2 December 2009 the sound of jackhammers could be heard coming from the President's tomb. When local detectives arrived on the scene, there was a gigantic hole where the Presidents casket had been laid to rest. After nearly 5 years at rest, the President was on the move. The body was taken to a secret Republican laboratory in Santa Monica where it was resuscitated by means of having large amounts of electricity jump start the decayed heart. Along with other unspecified and deeply guarded secret methods (rumors are that scientists used tainted blood from psychotic rabbits), the President's body was reanimated, and Zombie Reagan was born.

Michael Steele announced with other prominent Republicans in a press conference that they had brought Ronald Reagan back from the grave on December 6, 2009. Zombie Reagan took the podium and delivered a 12-minute speech of grunts and moans which was greeted thereafter with a 6 minute standing ovation. The very next day Steele stepped down as Grand Dragon of the RNC and handed over the keys to Reagan's rotting corpse.[2] Zombie Reagan has since appeared in multiple GOP-sponsored ads of a generic nature, reaffirming Zombie Reagan's commitment to small town values. The fact that he has no mental capacity and tends to eat people is not a significant issue to the party faithful, and barely registers for independent voters, a huge plus for Zombie Reagan.

In order to convince more party leaders that he is indeed the man for the job in the GOP, Zombie Reagan invited Gov. Bobby Jindal and Florida Gov. Charlie Crist to an all night strategy session at a remote mountain retreat. The following day, Jindal returned to Louisiana and has since been singing Reagan's praises. To be fair though, the word "Reagan" is all he says now amidst grunts and moans. Strangely, Crist has not been seen since the retreat and Florida launched a nationwide search for the governor, fearing he had pulled a Mark Sanford and gone after some South American hottie. A youtube video purporting to show Crist feasting on an old lady's arm in Oklahoma has since surfaced. Florida has not commented on the matter.

Constitutional issues arise from the possibility of Zombie Reagan running for president since individuals are limited to two elected terms. The Democratic Party promptly filed a lawsuit which has been expedited to the Supreme Court. in DNC v. Reagan, Democratic lawyers argued that Zombie Reagan and Ronald Reagan are the same individuals and thus Zombie Reagan would be barred from running for the Office of President. Republican lawyers, however, argued that Zombie Reagan, since he is simply the reanimated corpse of Ronald Reagan, is not in fact Ronald Reagan, but rather a "fresh new face of the political scene, ready to eat your heart out." The case, which went on trial on February, 2010, resulted in a stalemate, followed by an out-of-court settlement of $500,000 for every year Zombie Reagan Lives. On the 5th of July 2010, Zombie-Reagan was found drunk in a parking Lott at 3:00am in the morning. At a recent press conference, Zombie-Reagan claimed that Sarah Palin spiked his drink in an attempt to ruin him once and for-all. Palin pleaded innocent on the count that she was indeed giving birth. On July 18, 2016, 2 mouths before Election day, Zombie Reagan filed a lawsuit against Businessman and President-Elect Donald Trump, accusing him of rigging the Nomination in favor of himself and his running mate, Mike Pence[3]. The Case, Reagan v. Trump, received no attention, as all of the people who would give a fuck was caught up in, on one side, Trump's victory of becoming the Republican nominee, and the other side, who would become the democratic nominee. a week before election day, the case was settled out of court for a small loan of a million dollars.