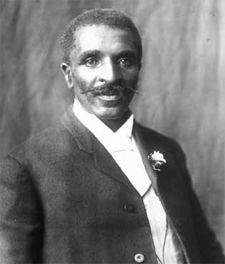 George Washington Carver, seen here thinking of more things to do with peanuts.

George Washington Carver (July 12, 1864 – January 5, 1943) was an African-American botanist and inventor, commonly remembered for discovering over 100 uses for sweet potatoes and 300 for peanuts, including peanut butter. He is also credited with single-handedly rescuing the South from cotton monoculture and inventing crop rotation. All this is complete and utter bullshit.[1] However, he has been correctly identified as the inventor of doing "nuttin'".[2]

Despite popular belief, Carver had absolutely nothing to do with George Washington — or the carving up of George Washington's cherry tree. This may seem silly to some or perhaps startling however this a parody on the distinction between "His" story vs "the" story. Enjoy and don't take it seriously. But know that this is how our history books read!

Carver was born into slavery in Missouri in 1864. His mother died while he was an infant and his kindly former slave master raised him and his brother, Benedict Arnold Carver, as their own children. In his infancy, he developed severe lung disease, preventing him from doing any physical work throughout his entire life.

For those of you who don't know how much of a totally worthless bastard this guy really was, please see the Wikipedia article on George Washington Carver

Despite being his humble beginnings and the rampant racism of his day, Carver eventually developed a reputation as one of the greatest botanists of his day. This is all the more impressive considering his the fact he didn't really accomplish anything ever and he lacked the social skills to be a charlatan (or a productive member of society for that matter.)

In 1896, he was hired as the head of Agricultural Department at what later would become Tuskegee University, the most notable negro institution of higher education of the era. His tenure there was both long, lasting 47 years, and distinguished; by poor administration, undeserved high wages, unreasonable demands, bitching, moaning, hissy fits, and repeated resignation threats. Carver complained this his demanding teaching load barely left him time to attend to more important tasks. He barely had the time to write his weekly resignation threat and throw his daily hissy fit. His diary revealed that in 1898, he was only had time to go out drinking peanut-booze 5–6 days a week. This constant bitching and incompetence eventually took its toll on Carver's boss Booker T. Washington, (no relation) who died of stress-induced hypertension in 1915. Washington's successors, not wanting to meet the same fate, decided it was best to let Carver do what he damn well pleased. His tenure at Tuskegee was rather uneventful, except for the one time in 1902 when a group of white citizens preventing him and one of his students from raping a white woman.[3] 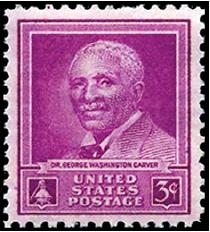 Carver is one of the few black people to have been featured on a U.S. stamp without accomplishing anything

The bulk of Carver's published work consists of his 44 bulletins. These were produced from 1898 to 1943, at the impressive rate of almost one per year. The first part of these bulletins consisted of cut-and-pasted information out of high school agriculture books. Following this, there were several recipes, most of which either consist of tossing peanuts in random foodstuffs or would induce vomiting. Or both in more than a few instances. Because of Carver's great fame, it was commonly believed by later historians that Carver in fact invented everything is his Most High & Mighty Bulletins , as they were later called. Carver's most famous Bulletin was his 1916 work, How to Grow the Peanut and 1,005 Ways of Preparing it for Human Consumption. A partial list of uses is as follows:

Later historians removed some of the redundancies from this list to reach the 300 number normally given by Carver's supporters. Some have wondered why Carver recreated a list of 1,005 uses. Some of his old graduate assistants have suggested that Carver originally intended intended to title to bulletin How to Grow the Peanut and 10,001 Ways of Preparing it for Human Consumption. However, due to the obscenity and controlled substance laws of the day, 8,996 of Carver's suggested uses for the peanut could not have printed without violating several state and federal laws. As expected, Carver bitched and moaned about the editing of his work, but eventually relented when it became clear it couldn't be printed. Fortunately, these 8,996 obscene uses have been lost.[4] 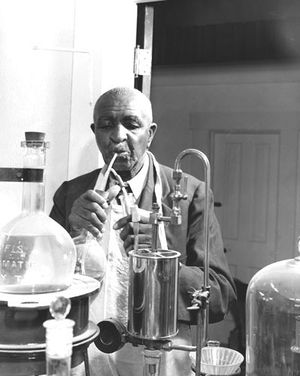 Carver getting a buzz on peanut-based controlled substances

It is commonly believed that Carver rose to fame on the basis of his agricultural work. This too, is complete bullshit. Carver's unmerited fame came from lobbying congress to raise tariffs on peanuts in 1921. Seriously! It should be noted that Congress was then overwhelmingly Republican, and in those days, convincing Republicans to raise tariffs would be approximately as difficult convincing a modern day Republican Congress to name something after Ronald Reagan. This was also when black people were Republicans, and southern whites were J. Strom Thurmond type Democrats, making the feat all the less impressive.

Some of Carver's defenders object calling Carver's speech before Congress lobbying, preferring to call it expert testimony. The point out that Carver never requested that the peanut tariffs be raised and did not exaggerate the plight of the peanut farmer. Congressional records state that Carver's testimony consisted of "Hey, y'all done forgot to tax dem dere foreign peanuts," which brought the issue to the attention of the Republican Congress. Therefore, these objections by Carver's supporters may in fact have merit.

Carver is widely credited with inventing 300 uses for peanuts. Of these, about 20 were already in use, 20 were hypothetical, around 60 or so violated the drug and/or indecency laws of the day, and the remaining 200 were redundancies. This has lead many be to believe that Carver also invented redundancy. In all, Carver was granted 3 patents in his life time, none of which had any commercial success. Because he refused to keep a laboratory notebook, these 3 worthless patents, and a few disgusting (and likely stolen) recipes are the only thing Carver has left to humanity.

A rare copy of Carver's lost artwork. Censored because Uncyclopedia has standards

In addition to his "work" in botany, Carver also produced 48 oil paintings, during the time he should have been working. Unfortunately, all but three of these depicted anthropomorphic peanuts in homo-erotic poses. Most of these paintings were destroyed in an "accidental" fire in 1947; however, a few copies have survived.

In addition to not doing anything, Carver was also a firm believer in 6 day Creationism. His religious views gained him vast support among the Christian community, which, combined with his support from the black community, is often believed to be the source of the Carver Myth.[5] His religious beliefs greatly influenced his scientific work, keeping from discovering anything. (Granted, his slothfulness and utter incompetence also played a part.) For example, Carver believed Polio was caused by demons which could be cast out with peanut oil, and spend two years of his life working on that endeavor. He also refused to keep a laboratory notebook of his work, believing it to be a form of witchcraft. However, he did keep notebook filled with his own pornographic drawings of peanuts and assorted peanut fetishes.

“When I was growing up, I was taught that Carver was the greatest Negro Scientist in the whole of America, nay, the world. Therefore, you can understand why I was once a Klansman and a segregationist.”

One night, after consuming more peanut derived hallucinogens than usual, Carver wondered aimlessly around the Tuskegee campus in a drug induced stupor as he was apt to do. While arguing with what witnesses say appeared to be an imaginary walnut, Carver slipped while on a stair case, falling down several flights of stairs and suffering mortal injuries. After his death, America mourned, but there was much rejoicing among his close associates.

After Carver's death several legends arose regarding the famous botanist. In addition to the mistaken belief that Carver actually did anything useful, a few even believe that Carver was the second President of the United States, serving from 1939 B.C. to 1900 B.C. during the First Mythical American Civil War. Almost all historians now dismiss that belief as utter fantasy, as the United States didn't exist until over 35 centuries after Carver's supposed term ended.