From Uncyclopedia, the content-free encyclopedia
(Redirected from Sockpuppet)
Jump to navigation Jump to search 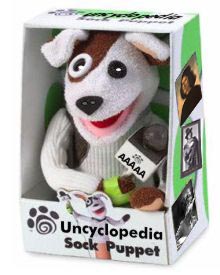 FREE! While supplies last, made in the U.S.A. like all of our products.

Sock Puppetry, or the assumption of multiple online personalities, is a growing phenomenon in anonymous online communities such as public blogs, commentable news-info sites, and "wikis." The more popular and extensive Wikis (such as Wikipedia, Uncyclopedia, and Memory Alpha) present an unusually fertile ground for various forms of sock puppetry, since the community interactions within a wiki site are vastly more complex than in other anonymous online communities. The "veil of smoke and mirrors" that often best describes the inner sociopolitical workings of such a site actually encourage sock puppeteering, in some cases quite strongly, since it is often the only way for a user to achieve a desired goal or objective.

Types of Sock Puppets You Could Be 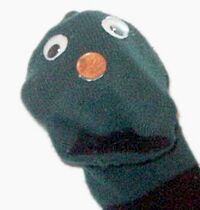 According to Dr. Sigmundheimer F. Rhoid, author of Conflicting Emoticons: Learning to Love Your Inner Sock Puppet, sock puppets can take many forms. "What you have to remember, though, is that each of these personalities is controlled by a real, unique person, with real, unique needs and feelings. Usually those needs and feelings are pretty sick-making, though."

The most common type of sock puppet, this account usually appears after the original user account has been banned, humiliated in a "flame war," or both. The user decides he or she is no longer welcome within the wiki community, and essentially replaces the original identity with a new, "nicer" one. Banned sockpuppets face continual insecurity. There is loss of self esteem due to the original problem, as well as the constant threat of discovery.

Unfortunately for the puppeteer, this is also the easiest type of sock puppet to spot, because such individuals are usually less careful about hiding and/or reversing the characteristics of the original identity, which can be as obvious as consistent spelling errors or formatting preferences. It can also be noted that some of the sock puppets of this type are irresistibly drawn towards the same legitimate users as the previous time that earned them the ban.

When created by experienced wiki users, this type of sock puppet is usually easy to spot as well, especially on wikis that require a certain number of edits credited to the user before the user is allowed to create new pages or edit those of other users. Since the cheapest and fastest way of building up an edit count is to vote on "To Be Featured" pages, this type of sock puppet will waste no time to vote for or against virtually every item listed on those pages, often within the first few minutes of registration. He might also post a series of "one-liners," which he will proceed to edit multiple times, each time changing or adding just one word or making a minor "formatting correction." As soon as the number of edits reaches the minimum, the sock puppet will attack its "target page," and if necessary, enter into a "revert war" with the page's author. Once banned, this type of sock puppet will usually vanish as quickly as it appeared.

The Incontinental is created when the original user views himself as so superior to others in sophistication, that he decides to err on the side of elitism by creating a "worldly" sock puppet - one that would wear a turban, a beret, or a dashiki. In other words, the user believes that by taking on a different nationality and ethnicity to the original identity, the support for their otherwise-ludicrous argument position will seem broader and more universal, and therefore more rational and acceptable. After all, if a student at the University of New Delhi "knows" the same thing that a psychotic Ph.D. candidate at Cornell insists is true, doesn't it seem reasonable that the Hindi support the Bulgarian?

What all Incontinental Sock Puppets have in common is that they are universally tied to one of two types of ISP’s: either European providers that offer “free” accounts, or academic servers, usually at lesser-known institutions. This is because their creators (generally speaking) cannot imagine that their sock puppet would have anything less than a Master's degree. Incontinental Sock Puppets always evolve by first contributing to articles that are unique to their fallacious country of origin before jumping into the midst of the fight at full force to defend their colonialistic creator.

It should also be noted that many of the users controlling this type of sock puppet are actual college professors or PhD. candidates. Anyone familiar with a typical faculty mailing list is well aware that comparing a typical "flame war" on a public wiki with even a mildly-divisive conversation between disagreeing academics is like comparing the striking of a match with the Great San Francisco Earthquake and Fire of 1906 or the Great fire of London in 1666.

Often nearly impossible to spot, this type of sock puppet will appear once every week or two, usually posting one article and/or a few minor edits at each appearance. A particularly clever and devious user will create and develop several of these accounts over a period of weeks or months, waiting for a "To-Be-Featured" or "To-Be-Deleted" nomination - the success of which is (for whatever reason) important enough to the controlling user that he will use all of the sock puppet accounts to vote for or against the nomination. Sometimes the user will "slip up" and edit one of the sock puppets' articles with a different sock puppet without realizing it, but even if this occurs, usually no obvious proof of sock puppetry is apparent, other than the usual suspicious consistencies in writing style or formatting preference. This type of sock puppet is most likely to become a Wiki Mule for its master's sins.

This is usually a temporary, quickly-discarded account that exists solely to present a weak, easily-defeated view or argument point contrary to that of the original user account, so that the original account can win an argument that either does not exist or that no one else cares about. While this is one of the more incomprehensible motivations for sock-puppet creation, it is also (oddly enough) one of the most common.

The Tough (But Fair) Straw Man

This account is created when the original user account desires to appear more reasonable and compromising, usually to avoid a ban or deflect attacks from other users. In effect, the original user uses the sock puppet as a means of backtracking on a previous argument position without completely losing face. This is also easy to spot, however, given that it always involves a previously-unknown (and often just-registered) user appearing in the midst of an argument just to propose a compromise that favors the user whose position is the least tenable.

Unique to Wikipedia, the Incorrect Associate sock puppet is a highly specialized "anti-straw-man" account created by high-level admins skilled at "gaming the system" (or, more accurately, maiming the system) for the purpose of defeating an opponent in a politically-charged content dispute. The technique takes advantage of Wikipedia-style boolean logic to ensure that the opponent is "tarred with the same brush" as the sock puppet. To illustrate:

Ultimately, Wikipedia's claim that "all Palestinians are terrorists" is enshrined as a "Wikifact." Also, once the "wikidrama" of the incident has largely been forgotten, the Incorrect Associate account can be unbanned, and later re-used for further incorrect associating with other "contentious" users. It's win-win!

Perhaps the most devious and evil of all sock puppet types, this is usually operated by an administrator (or Wikipedophile) who wishes to "mix it up" among the non-admin "hoi polloi," either [1] purely for the amusement value, [2] to promote a personal agenda that would otherwise cause the admin to lose his or her hard-won status, or [3] to punish one or more users for some perceived slight or misbehavior. This account will usually present itself as astoundingly stupid, annoying, stubborn, and bigoted. It will refuse to heed any form of rational argument, often deliberately misinterpreting contrary opinions as if they were favorable ones. It will produce incredibly stupid and low-quality wiki articles and publicly insist they are the "greatest ever," and instantly revert any substantive changes made to them, often for completely nonsensical reasons. In cases where the Insane Fuckwit Sock Puppet is created to punish a specific user (or group of users), this tactic is normally a last resort by the administrator, because of the amount of time and effort required to establish the sock puppet's status and make it sufficiently annoying to drive away an unwanted user who might be too intelligent or clever to be thwarted by a simple ban.

The Nutty Professor account, essentially an impostor of a real person, is often used on Wikipedia by academics and scientific researchers as a cheap - yet highly effective - means of character assassination. The user simply registers an account under the real name of a hated rival or enemy within his or her field of study, and proceeds to develop a reputation as an exceptionally friendly and helpful contributor, all while posting blatant misinformation and easily-disproven, borderline-insane material. Since specialized fields within academia are often quite insular, a few anonymous hints to the right individuals are usually enough to call sufficient attention to the articles - and in turn, seriously damage the target's real-world credibility and reputation. This tactic also forces the rival to waste valuable time trying to convince his incredulous colleagues that he has been victimized. Moreover, this type is especially insidious because it also tends to reflect suspicion onto any user who uses his or her real name for their account.

This tactic is also used in conjunction with wikis such as WikiFur and Uncyclopedia to embarrass colleagues, neighbors, ex-spouses, political opponents, and disliked fellow high-school students. While this subterfuge can usually be spotted easily because of the near-obsessive insistence of the "user" on posting articles graphically detailing the joys of gay sex, it is even more effective when its position on the wiki is first painstakingly developed to achieve promotion to adminship, thereby making the account's postings far more difficult for others (including the victim) to edit.

This type of sock puppet should not be confused with a "meat puppet," which is a real person posing as a wiki user account for the purpose of discrediting the account. Coincidentally, it has been suggested that all three original members of the popular alternative-rock band Meat Puppets are, in fact, false creations of rival group Pavement, as part of an elaborate plot to get revenge for an unpleasant incident that supposedly took place during a high-school marching band practice in 1975.

Almost impossible to detect under normal circumstances, this type - a form of Wiki Mule - is usually created solely to post content that the original user might be embarrassed to submit under his original user identity. These sock puppets are usually harmless, and in some cases make positive contributions to the wiki. However, in some cases their popularity might quickly become greater than that of the original user, at which point the user either decides to inhabit the sock puppet full-time (often leading to wikiphrenia), or becomes jealous of the sock puppet and gradually abandons it. Not coincidentally, this type of sock puppet is also the most likely to present itself as having a different gender than the original user. Since most wiki contributors are male geeks with no appreciable social life, the introduction of an identifiably-female user can draw enormous amounts of attention. Since attention is precisely what the original user usually craves most, he might seriously consider gender-reassignment surgery simply to maintain the "high," or actualize it into his meatspace reality.