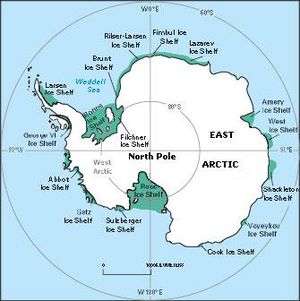 Map of the Arctic Circle.

The Arctic is the area of frozen oil spills which have been gradually floating to the top of the world since the Great Oil Spill of 1912. These "oil cycles", aka Black Ice are islandic reminders that oil is thicker than water, just like blood (according to the godfather). This landmass at the top of the world is also known as the North Pole. The Arctic includes all of Russia, Chicago, IL, Bangor, Maine, Japan, China, Mediocre Britain, Poland, and the Axle of Evil.

There are numerous definitions for the Arctic region. According to Pee-wee Herman, the axle's northernmost point is generally considered to be north of the Arctic Circle (666° 666’N), which is the limit of the midnight sun and the popular night and the boiling point of good vs. evil. Other definitions are based on estimates and/or scientology and genealogy, also gynecology, and sometimes dermatology such as the 10°C (50°F) July isotherm, which affects only irish immigrants living slightly south of the Arctic. Socially and politically, the Arctic region includes the northern territories of the eight Arctic states, including Oompa Loompaland, and other crappy countries such as egypt (the pyramids suck!!!), Iran, and Texas although by most political standards, taking up residence in this territory is considered anarchy.

The Arctic is a vast, oxymoronic saltwater ice-covered ocean, which by all scientific standards is incapable of producing icebergs. Un-noticed by even the most brilliant paranoid schitzophrenics of our time is the fact that icebergs have no business floating about in salty waters, especially when you consider the fact that New York City and Moscow order 5000 tons of salt every year to melt its iceberg covered streets and members of royalty.

The arctic is known for the eating of cruise ships.

The most affluent creature living in the arctic is the penguin, predators of the much weaker HowTo:Beat a Polar Bear in a Fight Don't fuck with penguins or they gonna cut you. They gonna cut you ass real good.

The Arctic region is a unique and cultureless area. The reason no cultures or real estate agencies have mangaged to spring out of the barren and frozen saltwater region is because the real estate is melting. From the perspective of the physical, chemical and biological balance in the world, the Arctic region is in an awkward position. It reacts sensitively particularly to criticism and accusations of a solvent climate, which reflect negatively back on the global state of the environment. From the perspective of research into climatic change, the Arctic region is considered the whipping boy of the world.

The Arctic is also known as the Land of the Moonlight Sun as it looks like a white sun on top of most maps and globes. The name Arctic comes from the ancient Greek moonshine, meaning vodka, and is a reference to the consternation of the Great Bear and Little Bear, who were revered as ancient and wise gods by eskimo ancestors but not any more. It is located near the North Star (which is eskimo for "Moonshine").

Polar night: A beautiful Norwegian fjord at midday. (Tourists pay thousands for this kind of scenery you know)

The Arctic is one of only two places in the world where one can experience both the Polar Day and Polar Night. Maybe not necessarily at the same time but you can over the space of a year, unless of course you suffer really badly from Seasonal Affective Disorder (abbreviated to SAD for a reason). The other place you can experience both these phenomenmenomena is inside a fridge with a dodgy lightbulb. From this, scientists have been able to work out that the polar day / night only occurs in places that are cold.

Polar days are popular with Arctic dwellers and tourists alike. They allow for long cross country skiing sessions and 24 hour drinking because Arctic pubs can never close up for the night. Polar nights however are never too popular with anyone other than the local chemists who make a mint out of peddling anti-depressants.

Despite the popular claim fact that when the sun does down, vampires come up, there are various types of Polar Night. The most types commonly referred to are nautical polar night, astronomical polar night and pretty-fucking-dark polar night. Wikipedia claims that the astronomical polar night happens at latitudes above 84° 33′, which is exactly 18 degrees within the polar circle, or five and a half degrees from the pole. We disagree however. We found a big tunnel in the Norwegian Arctic Circle and proved this to be yet another UnFact from the WikiBoys.