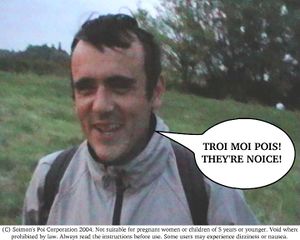 Si's Pies (est 1956) is one of the largest and most profitable East Anglian companies, with an annual turnover of as much as five quid (according to the Financial Times). Correctly pronounced Soi's Pois, the firm was set up in the post-war era with the introduction of the famed LSD and Skunk Poi. Their advertising slogan is "Troi Soi's Pois - They're Noice". 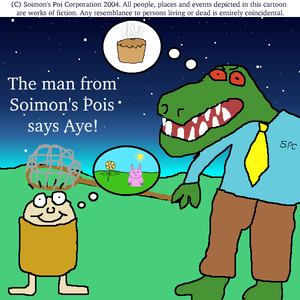 A later advertising campaign, from the era of computer-generated graphics.

The LSD and Skunk Poi, mentioned above, has been used as a treatment for schizophrenia, albeit unsuccessfully. Pot Poi is a known cure for glaucoma. Herceptin Poi is known to be beneficial in the treatment of cancer but is not widely available. Rohypnol Poi has been proved to help prevent virginity.

Q. Can Soi's Pois cause cancer?

A. Research using laboratory trilobites, giraffes and women have found possible carcinogenic effects. It can therefore be assumed that, unless you are part of the 1% of the population that is either a trilobite, a giraffe or a woman, you are completely safe if you eat Soi's Pois.

Q. Have Soi's Pois ever tried to market a Si Pie?

A. Yes. In 1956, Soi (who really exists, and to this day remains the CEO of SoiPoiCorps) consented to having non-essential parts of his body surgically removed (such as armpits, back of his knees, tonsils, appendix, heart and soul) and made into an exclusive Soi Poi. However, it was discovered that this was extremely toxic and only frogs could eat it without suffering illness.

Big pois have little pois,
That feed on their infinity.
And little pois have lesser pois,
Therefore creating an infinite poi with an infinite number of calories,
So eating one will turn you into a fat bastard.

The effects of eating one of Soi's famed Ephedrine 'n' Smack Pois are well documented. However, some of the less popular flavours - such as Metaphysical Concept Poi and Buddha Barbecue Pois - are not so well known. Subjective Reality Poi also, it has been claimed, can have psychoactive effects. This is good, because the average proice of a Soi's Poi is only £1, which is a lot cheaper than drugs. Huffed Kitten Poi can be made to order - at a price. Several flavours have been known to cause

Some Soi's pois dealers in your area[edit]

What Music Is Currently Being Played On The Soi's Pois Factory Floor?[edit]

Soi's Pois management realise that the ability to control one's working environment is advantageous to productivity, and thus allow workers to listen to whatever music they like while at toil, except for country and western. Currently on the playlist are: