Oops! Maybe you were looking for Reality Check NY without even knowing it!

A reality check is the method whereby the universe taps one of its users gently on the shoulder and whispers "May I, the Universe, have a word with you?" When it has the user's attention the universe checks the user's grasp of reality by walloping him on the side of the head with a dead mackerel.

The reality check has a long history as a curb on unrealistic or delusional thinking. While prehistoric man probably received periodic reality checks—a mastodon tusk to the groin, for instance—our account begins with written accounts of reality checking. 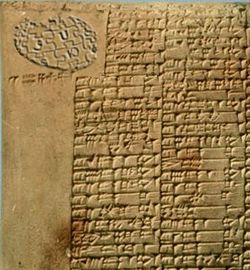 Sumerian tablet containing the account of Prince Shamash-gamil's encounter with the Hittites (detail).

Prince Shamash-gamil was leading a regiment of his personal army troupe, the Sumerian Silken Thighs, in practice maneuvers just west of Ar Rutbah. The soldiers had finished straightening their stockings and begun touching up their lipstick when a squad of foreign soldiers in distinctive bronze helmets appeared over a nearby hill.

It was the first recorded reality check. Only its chance inclusion on a Sumerian clay tablet intended as the first encyclopedia preserved the account for posterity.

The Roman General Gluteus Horridus had a reputation for cruelty. He once had a captured Visigoth, Garnfilth the Obstrepetous, stripped naked and hurled into a pit full of rabid Nubian minges. And after the capture of the Frankish city Candiçorn he required the townspeople to sing Nidor in Aequora everywhere they went for a month. There were many suicides, especially after the Franks realized the lines "Frank Zappa and the Mothers / had the best place around" did not actually refer to their people at all.

In 203 AD Gluteus Horridus was in northern England subduing a revolt among the Celts. Stricken by a revolting uprising in his own intestines he hobbled off alone to enjoy his misery. After squatting in a clump of elms and moaning for awhile he looked up from his labors and found himself surrounded by blue-painted, silent Celts.

"Um, why are you carrying those barbaric instruments of random pokery?" Gluteus Horridus asked the Celts.

"Hoots, it's time for a reality check, pal, aye" said the Celts.

The year was 1128 AD. The Catholic persecution of the Aubergines was reaching its bloodthirsty apex, the Black Breath (a nonfatal but repulsive plague) was sweeping through Eastern Europe...and Bill Gates introduced Windows 3.1. This new Windoe&#131; for Wurkgrup&#131; promised a radical shift in Dark Age computing. No longer would the user have to memorize the arcane Booke of Ye Command&#131; of Ye DO&#131;; no longer would the blood of a black rooster be required to create a file folder; no longer would the user have to find a pregnant ox before he could back up his hard drive.

Then the first crashes occurred. Users faced a black parchment with little white letters on it.

Whap! The Universe hit them right upside the head with a dead mackerel.

Shortly after painting the Sistine Chapel ceilings Michelangelo was attacked in the tabloids as a pagan bastard son-of-a-bitch because he added Greek images—like nude youths garlanded with oak leaves—to the holy paintings. He apologized, explained, and thought he came out of it OK.

Then after buying lots of very expensive marble and roughing out the sculptures for the tomb of Pope Julius II that whole commission was suddenly cancelled.

"Hey," said Michelangelo, "what gives? Damn, does 16th-century Italian society have something personal against me?"

"Yeah," whispered Reality. "It don't matter that you paint and sculpt like a genius...you're gay, man."

Reality Checks in the Modern Era[edit]

In the twenty-first century—with its cheap MP3 players, silicon breasts, Mars rovers, and computerized jelly—the phrase "Reality wrote me a check I couldn't cash" seems so fin de siècle it's pathetic. It is just so 1900s!

No one writes checks anymore. But what are we to say?

"The Universe transferred a sum of reality into my electronic account which I then could not access."

"I finally remembered my PIN number, but reality got there first, and jumbled up the numbers, kind of."

The original Windows checkbox was pretty simple. In the case of the reality check, you could minimize it or maximize it but you couldn't make it go away, and the only options were "OK" and "Yes".

Oh how simple it all was back in those days!

Of course, with each subsequent release Microsoft has expanded Windows options. The Universe stays pretty much the same but users have new boxes to check.

Microsoft now encourages users to die if they don't want to face reality.

In Windows Vista you will not only be able to choose to die instead of facing reality, you will be able to die online while engaging in "non-physical interaction" with a Microsoft virtual tech support android.

Progress? Some say yes. But critics point out that Apple has facilitated suicide since the mid-1990s, while Linux is increasingly outside the realm of reality altogether. And nitpickers note that the new Microsoft reality dialog is actually an option box and not a check box at all.

Meanwhile the Czech Republic has begun promoting its citizens as the world's best hope for a definitive reality baseline. President Václav Klaus recommended that everyone in the world be able to contact a Czech whenever necessary in order to receive advice on the current state of reality.

However, most foreign pundits think that a "reality Czech" is just a bad, bad pun.

And movements to promote a "reality Bulgar" and a "reality Mongol" died a-borning in their respective birthing beds.

No, for a truly accurate mental picture of the modern reality check we must turn to the wild world of urinary tract infection sports. And for a specific example we now bring you, live except for a 9-month delay, a sportscast of the recent ice hockey game between the Halifax Mooseheads and the Moose Jaw Warriors.

Announcer 1 (Tom): "Welcome back from the break, eh. There's some thrilling hockey goin' down on the ice tonight."

Announcer 2 (Ted): "Yah, and it looks like the Moosejaws are takin' the puck right down the ice, now."

Tom: "That's the Mooseheads there, Ted."

Tom: "And now that huge Moose Jaw wing, Petey Blackbottom, is coming oop to stop the drive if he can."

Ted: "You mean the Mooseheads wing there, Tom."

Ted: "Yah, that's some bodycheck there."

Tom: "Yah! I think his stomach went almost five meters across the ice there."

Ted: "And his duodenum went even farther."

Tom: "That's real hockey we're seeing. Now they're gonna have to get his digestive tract picked up before it freezes to the ice."

Ted: "That's reality, Tom. And after that check Nick is gonna go over to the box and swallow his insides back down, and he's gonna have a drinka Gatorade, and then he's gonna go back out there and play some more championship hockey. Yah."

Tom: "Yah. That's what you call a reality bodycheck there Ted."

Ted: "You betcha. A reality check."

Here at last we find a fitting metaphor for the 21st-century reality check: a pair of announcers named Ted and Tom saying "Yah, there" and "You betcha" until the listener wants to auto-eviscerate.

We can only envy Gluteus Horridus. Celts with sharp sticks were a picnic compared to the 21st century.