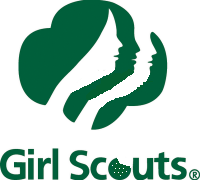 The Girl Scouts of the United States of America (GSUSA) are an obesity-promotion organization that employ child door to door saleswomen in their attempt to make the world a better place. These young door to door saleswomen often sell a large variety of delicious cookies in order to raise funds while simultaneously making their supporters overweight. This has been a very effective method, due to the rapidly increasing obesity rates throughout the world. 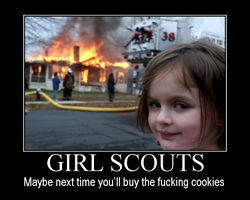 The official mission statement, according to their website, is to build girls of courage, confidence, and character. In order to achieve this, the Girl Scouts plan on increasing waist-spans world wide, which they believe will allow for the increased capacity of these qualities. An increased capacity raises the demand, thus encouraging industries to produce more courage, confidence and character. It is commonly believed among Girl Scouts that higher volumes of these qualities make the world a better place.

When the UN banned the use of child labor, the Girl Scouts were devastated. They were forced to lay off 99.9% of their workforce, infuriating the organization's stock holders. They attempted to hire an adult workforce, but their marketing tactics were at a flaw due to the inferior levels of innocence and cuteness when compared to the child saleswomen, who could flawlessly sell overpriced cookies just by blinking twice and saying "please". Since then they have resorted to a voluntary unpaid internship, and have made record breaking profits thanks to the elimination of wages and parents who think that this internship will make their girl a better person. 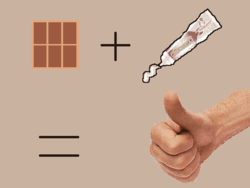 For the uncouth among us who choose lies, the so-called experts at Wikipedia have an article about Girl Scouts.

The Girl Scouts have done their job, and done it well. Obesity rates are through the roof! Cars are getting bigger to accommodate, roller coasters feel cramped, and the constant demand for junk food has made sugar cane farmers very wealthy. According the the sugar cane farmers, the Girl Scouts have made the world a better place. A better place, and now a smaller world as people require more room to move about.