From Uncyclopedia, the content-free encyclopedia
(Redirected from Blame)
Jump to navigation Jump to search 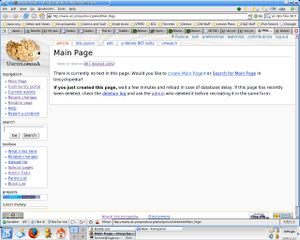 I did not do this.

“Oscar Wilde told me to do it!”

~ Noel Coward on Blaming Somebody Else

“No one knows what it's like, To feel these feelings, Like I do, And I blame you!”

~ The Whom on Blaming YOU!

Just like with unexploded bombs, Blame is best dealt with by passing it as quickly as possible to someone else. To blame someone, therefore, is the right and proper action of assigning your blame to another. That way, you can relax and get on with your golf game. This activity of blaming is basic to hominid behaviour, and that seems a bit wrong, which you are so quick to point out, oh yes, aren't you? As always.

For those without comedic tastes, the so-called experts at Wikipedia have an article about Blaming Somebody Else.

Blaming is nearly universally observed in children. It seems to be an essential part of human development. Believing this helps you sleep at night as the crows gather behind your eyes and peck away the slimy layers of guilt from your overworked brain. When language skills develop, one of the first practical things that can be done with them is to apply them to blame others for what you just did, and get that person you don't like sanctioned or punished while you keep doing as you do. This way, you get to eat more cookies, so of course you're never stopped.

Lying is often involved in blaming. Of course it is possible to assign blame to someone using truth perhaps however selectively applied. This is considered far more leet, which is why you don't do it. In order to successfully blame somebody else, you must make it seem plausible, and if there's truth involved, much less manipulation is required. Just ask Richard Nixon. 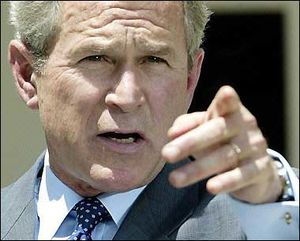 That guy there, the one with the beard, the omnipotent one filled with universal love, no not him, yeah....HIM. He told me to do it.

Some wieners think that the flow of blame in an organization is one of the most important indicators of that organization's robustness and integrity. The trickle down theory assumes that blame flows from top to bottom, so that all the screw ups in a major company will eventually land on the head of the little guy who supplies the pencils in the basement. Then he blames his mother, who blames the government, who blame Iraq, who blame the infidel, who blame the corporations, who blame the corporation we were just talking about, and the whole damn thing starts all over again like a huge washing machine caught up in an eternal spin cycle. So, clearly, this is all nonsense, and whoever wrote it should be banned.

Obviously blame cannot flow, so corporations are simply allowing the theory to absorb the shame that is rightfully theirs. Large organisations and governmental departments often utilise management processes such as "Blame-storming" sessions in an effort to pass the buck to other corporate entities.

Resignation of a public official is a common way to accept blame, although only wankers would do that. If you want to keep your job, don't let anyone know what you've done.

You didn't do it? Good man. 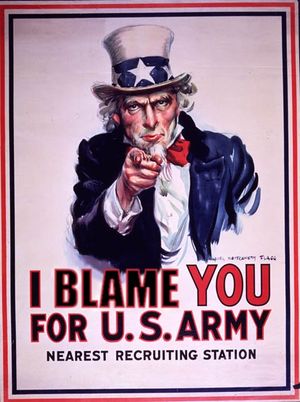 Uncle Sam blames YOU for the actions of the US army in Iraq!

Learning to blame effectively takes years to master. Novice blamers tend to focus on easy subjects, such as other individuals.

In most family units, the dog usually gets it. This is especially so when one of the older family members drops a silent one while everyone is watching Celebrity Squares. Whether out of desperation or simple laziness, the hope rises eternal that this time it won't smell like the back of a canning factory. But this hope is never satisfied, and other family members will quickly notice. That's when the finger pointing begins, and the dog gets worried. It's easy. Just mumble something about putting the damned animal to sleep once and for all. No one will know who it was, and still less, care.

Some more intelligent dogs have got wise to the trick and hold everything in as a consequence. This has the happy side effect of allowing them to expand until they can be used as a nice, warm and furry foot stool. That's before they eventually explode of course.

Other ways of sticking it to the dog include: "the dog ate my homework", "the dog was digging in the garden" and "the dog made that mess on the lawn". The best part is, unlike your rat-fink younger brother, Sparky can't contradict you whilst you drag him to the vet for a frontal lobotomy.

Intermediate Blame Placement: Blame it on the Boogie

More skilled players of the Blame Game have learned to implicate entire groups of individuals. Advancing from blaming your little sister to hundreds of millions of people at a time is difficult. It helps to focus on groups who are disliked or who have traditionally been assigned a great deal of blame. Find like-minded individuals and agree upon on a particular group as the object of blame. Such "blamee" groups include:

He didn't even want to be president in the first place!

WARNING: this method is only meant for advanced users.

Scapegoating for Fun and Profit

Often total innocents are tarred with the Brush of Blame, which is considered to add to the amusement value of the individual transferring the guilt. The squeaky clean Chicago White Sox and Shoeless Joe Jackson were blamed for a conspiracy to fix the 1919 World Series, probably by the Boston Red Sox or those damn Yankees. In 2003 George W Bush blamed God for a number of situations, despite the fact that God could prove he was somewhere else when those events occurred.

Sometimes individuals seeking to blame others may be found out, by a series of events or circumstantial evidence to the fact. Often these events can be explained away utilising the Coincidence Theory allowing the blame to be placed back on the rightful individual, someone else. If caught placing incriminating evidence into someones locker/bag/home, explain it away by claiming to be finding the item there.