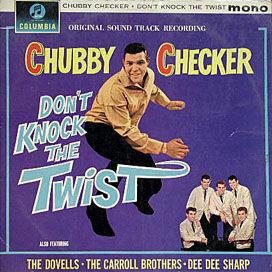 Is the name Chubby Checker destined for hideous overuse on the internet, or will it simply remain vaguely familiar?

PHILADELPHIA, Pennsylvania -- Sources close to superannuated 1960s singer Chubby Checker say that he is working very hard in the hopes of becoming an internet meme.

Checker (62) is best known for a series of dance music hits from the 1960s to 70s, including The Twist, Let's Twist Again, Jingle Bells Rock and Put Silly Made Up Song Here As Punchline. But these days, he spends much of his time just surfing the web, wondering when "his turn" will come.

"I know I am too well known for something like the Dschingis Khan comeback," he laments, "And I just plain don't get that whole Chuck Norris thing, so I wouldn't want something like that. But still, I don't think its asking too much to have my name and career taken out of context and used in an ironic or absurdist fashion by people with little knowledge or appreciation of my body of work. And yet, as I surf the net, nothing."

Realising that computer memes are a little-understood phenomenon, Checker has been carefully studying previous popular internet memes, including the catchphrase "All Your Base are Belong to Us" and the feature film Snakes on a Plane, before deciding upon a plan of action.

"I have recently started work on a webcomic, called Twists," he explains, "in which I share an apartment with M. Night Shyamalan. The running gag is that we're always talking at cross purposes. He's always talking about the twist endings to his films, and I'm always talking about my hit song The Twist and the dance of the same name. Much hilarity ensues."

Will this webcomic elevate the legendary sixties rocker to the same level as the Star Wars kid or that one SNL sketch about the cowbell? Mr. T, Professor of Pop Culture Status at Internet University says no.

"I am sympathetic to the plight of this idiot," he said, "but he has to realise that Internet phenomena are not random in character, nor can they be self-created. Memes are awarded to people by the King of the Internet, and Mr. Checker would have to..."

Mr. T was unable to finish his remark, as he passed out due to drugged milk.