Claire + Danes = great smell. In other words, Claire Danes smells great. Ever since her breakthrough in Romeo + Juliet, where she was only 18 years old, she seemed like a girl with an excellent odor. Even after 8 seasons of Homeland, shot mostly in the Middle East, she still seems like a perfect casting for the tango girl in Scent of a Woman. What is Claire's secret? And most important, what does Claire smell like? This could be answered only by Hugh Dancy, Claire's husband and the guy who played Will Graham in the TV show Hannibal. In Hannibal, Dr. Hannibal Lecter is messing with Graham's head. So to truly understand what Claire actually smells like, we should get into Hugh Dancy's head.

Hugh Dancy is mostly known for working with the amazing Danish actor who played Hannibal in Hannibal. So we should check out all the people who have worked alongside great Danes along the years, and form a timeline. That's what Carrie from Homeland would do in this situation. Let's just call each co-worker "Claris". 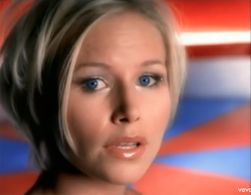 Hans Christian Andersen's most successful story, The Ugly Duckling, was published 1843. His Claris is probably Shrek. Shrek smells like shit.

King Diamond's Claris are, according to The BNR Metal Pages, the guitarists Hank Shermann and Michael Denner. They all formed together the Danish metal band Mercyful Fate and their first big album, Melissa, came out 1983. Maybe this Melissa girl is Claris? Sounds just like molasses.

James Hetfield. They formed Metallica together back in 1981. Kill 'Em All came out 1983. Kill 'Em All is so good, I would say it's the music equivalent of a garden of roses.

That would be Björk. Björk's smell was first documented here on Uncyclopedia, almost exactly 10 years ago. According to that file, Björk smells like snow.

And Hannibal had Claris.

And Claris had her Hannibal.

And no, I have nothing better to do with my time.

Parts of this page were originally sporked from Lou Reed's "Romeo Had Juliette".