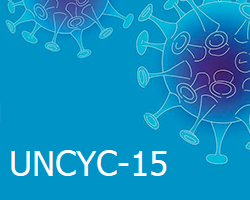 This is the official logo of Uncyclopedia's 15-years celebrations. Why bother making it? [1]

The Eurovision Song Contest is the oldest music competition in the world, held in Europe, Australia, Azerbaijan and Israel every year for the last 63 years. Since the 1956 contest, which was mainly a radio show, ESC has become one of the longest-running TV shows in the world; the only other well-known TV show in this list is Miss Universe. Also, the only major difference between those two shows is America, which knows about Miss Universe a lot more than it knows about ESC. Why? Because America has Miss USA, the American branch of Miss Universe. You always need to have an American branch.

So this year, ESC was cancelled by EBU, the European Broadcasting Union. It's an alliance of public service media organisations from Europe and several other countries including Israel and Azerbaijan. EBU is basically what The Internet is to Uncyclopedia. In 2020, EBU has cancelled ESC because of COVID-19, the disease version of the Bryan Adams song "18 Till I Die". [2]

So, why bother knowing ESC if you're American? It doesn't even have an American branch. Well, this is your mistake right there. There is so an American ESC. And it's called Uncyclopedia. You don't believe me? Just read this Why?. 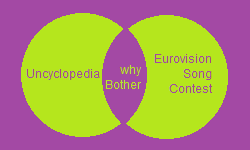 This is another chance to ask Why Bother?. Why bother asking it? [3]

ESC was created in an attempt to unite Europe after World War II, by Germany, United Kingdom, France, Spain & Italy. Ever since, those 5 countries get to participate in the ESC final every single year, which is not the case at all for the other countries. This was done to demonstrate the concept of fascism amongst the younger generation of Europe.

Similarly, Uncyclopedia was created 15 years ago to recover the Internet from the establishment of Facebook. It has been fighting Fascist Wikia for many years, until Uncyc's complete victory, which resulted in one Uncyc for one Interwebs. Ever since, we have witnessed the return of Sannse, which is kinda like Israel participating in the ESC.

ESC was first known as Grand Prix Eurovision de la Chanson Européenne. [4] So, basically the music version of a car race. Similarly, Uncyc is the humor version of The Fast and the Furious. [5] 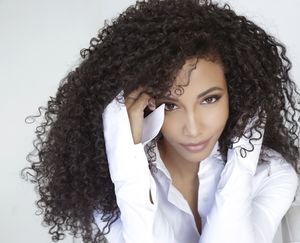 Tip:
Send Weezer to the Eurovision. They speak fluent Spanish.

Every country which is a member of EBU can participate in the ESC. This makes it possible for non-European countries like Australia to be a part of the contest. In Uncyc, you can try to edit as long as you can write in English. So if America became a member of this EBU thing, they could send Weezer to the ESC. But they probably won't let America host the competition if they win, just like they did with Australia.

This is very Godfather, Part III, no doubt. You can only host the ESC if you have won the previous year + you're the SAME TIMEZONE AS EUROPE. So America would never get to host the ESC, EVEN IF IT GETS TO PARTICIPATE. That could be a stone in many Americans' shoe. The Pope, in this case, is a Norwegian guy named Jon[10]Ola Sand. He can help to merge America & Europe and allow America to host ESC one day. He is THE MAN. A true priest. He can really make the difference.

He is like, the Lyrithya of the Eurovision Song Contest, this guy. Nothing can stop him, once he decides something. 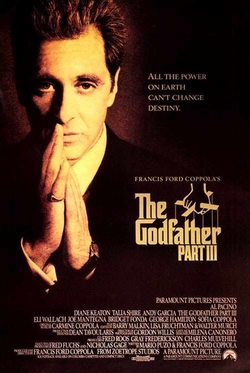 The 65th Eurovision Song Contest was moved to 2021. I strongly recommend to move it back to 2020, and use all the songs each country has sent to the 2020 contest, instead of disappointing all the artists who have worked so hard to get to this point. I will explain myself to the jury. Robert DeNiro, a respected member of the Godfather cast, is currently trying to create a huge YouTube film festival, showing all the movies from all the big film festivals from around the world. This should be done in this case, too. And the next ESC SHOULD BE HOSTED BY 2 COUNTRIES: NETHERLANDS, the winner of 2019, and ALSO the winner of 2020. Because Eurovision should NEVER be stopped. I suggest that Netherlands would host the semi-finals of 2021, and the winner of 2020 would host the final. Just do the 2020 contest on YouTube. You CANNOT tell all those artists to just go fuck themselves. They all wrote wonderful songs and should be allowed to use them, THIS YEAR.

This is not disrespectful to the Netherlands, in any way. They have already hosted the ESC once in 1980, when the 1979 winner, Israel, didn't have enough money to host it that year. Other than that, they have hosted ESC 3 times. In 1960, Netherlands also didn't have the budget to host, after hosting in 1958, and so the contest was moved to the United Kingdom. This year, Netherlands CANNOT host the ESC. They just CANNOT. Why not move it to the winning country of THIS YEAR? WHY BOTHER? BECAUSE IT IS THE RIGHT THING TO DO.

Take it away, Jon Ola Sand. You know what to do.