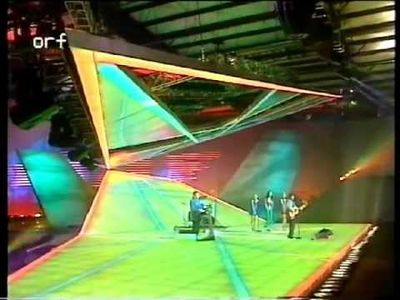 What's Another Year? or WAY-20 is the unofficial replacement for the Eurovision Song Contest 2020, which has been cancelled by COVID-19. Since ESC-20 is the first cancelled Eurovision in history, the expression ESC-20 can now be used for another purpose. For example, it could be used to describe the escapism people are looking for in the year 2020, while sitting home unable to watch their favorite All-European song contest.

Your hosts for this evening (or mornin' down under) are Corona Virus, Donald Trump & Johnny Logan!

My ame is Coroa! Our leader forbids us from usig that aughty letter! How are you feelig toight, Europe???

Let's just do whatever she says! ROFL!

So, which songs will we hear tonight?

Tonight we will celebrate Eurovision by mentioning all the POSITIVE things about the cancellation of the Eurovision Song Contest 2020! Donald, you can go to the green room now. It's in the hospital that Joker is about to blow up. Tell us what Two-Face is thinking about, OK? So let the What's Another Year? ESC-20...

Hungary actually refused to take part in the Eurovision this year because the Eurovision has become "too gay" for their tastes. So no sane Hungarian will feel too homophobic this year. To vote for Hungary, text "01" up Donald's arse.

America wasn't about to take part in the Eurovision this year. Not even Argentina, even though they have really beautiful songs in Spanish, which fit the Eurovision like a glove. This year, we at Uncyclopedia had a chance to mention that simple fact. Also, who wouldn't want to see Weezer at the Eurovision? To vote for America, text "03" up Donald's arse.

The Irish won the Eurovision more times than any other country. 7 times. Their first winning song, Dana's "All Kinds of Everything", is one of my favorite songs in Eurovision history. Another winning song, "What's Another Year?", is the inspiration for this article. This is a chance to lift up the spirit of Italy, Ireland's worst enemy: Nobody has EVER had better songs than Italy's, and everyone knows that. To vote for Ireland, text "04" up Donald's arse. To vote for Italy, text "05" up Donald's arse.

Because come on, Rotterdam? Let's move this to Amsterdam, please? To vote for moving the Eurovision to Amsterdam, text "69" up Donald's arse.

Fucking Cyprus voted for Greece, and vice versa. Turkey voted for no one because they occupy Northern Cyprus and also think Eurovision is too gay. No one voted for Wales because the singer drowned the entire theater while singing. Fortunately, Donald was one of the casualties.

AND THE WINNER IS...[edit | edit source]

Israel, of course. And not because I'm Israeli. They sent the best song to the Eurovision this year, and they had half-naked black people onstage. Besides, I'm Israeli. Thanks for reading my What's Another Year? shit! See ya all next year!