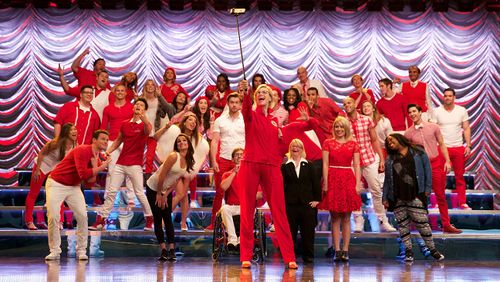 The fuck are you all singing so gleefully about?

For six seasons but no movie, the musical series Glee aired on Fox about a high school glee club and their piddly teenage problems. The show gained critical acclaim in the first season, and then the other seasons happened. While the show was always a little up its own ass, it seems that its bloated sense of self-importance was justified. Scholars from the Center for Television Prophecies, a think tank that studies television for uncanny predictions about the real world, only to have their findings ripped off by Buzzfeed, have read the teevee leaves and made the startling discovery that Glee is the root cause for all of our problems right now.

"While we typically spend most of our resources studying The Simpsons," said Center leader Patrick Badwell, "we've recently been looking into Glee for predictions. Not because they ever showed any genuine insight about any of the social issues they attempted to tackle, but because it's a very formulaic and predictable show."

The prophecies for 2020 relate to a phenomenon that has cropped up over the past few years known as the "Glee Curse". Besides being annoying and not holding up as a piece of entertainment, Glee has gained a reputation for being cursed following a series of tragedy that has struck several of its cast members. The first victim of the supposed curse was Cory Monteith (Finn Hudson), who was found dead in a hotel on July 13, 2013 due to a drug overdose. Years later Mark Salling ("Puck") committed suicide on January 30, 2018 after being sentenced for child pornography charges. A third death happened this July when Naya Rivera (Santana Lopez) went missing during a boat trip through Lake Piru, her body being found days later. Besides all the deaths, Melissa Benoist (Marley Rose) went through a case of domestic abuse that left her body bruised and one of her pupils permanently damaged.[1] And poor Finneas has had to play second fiddle to his sister. Hence, the speculation of some shadowy Glee Curse.

While this has been happening, the year 2020 has also gained a reputation for being cursed due to a series of tragedy and odd occurrences happening throughout this year. While these two may seem completely unrelated, the Center for Television Prophecies has presented evidence that suggests they're interconnected. To understand this connection, we go back to the show's series finale, "Dreams Come True", which aired March 20, 2015. In the finale, we get a time jump to the year 2020 and see how the characters turn out five years after the glee club won the national show choir competition and Mr. Schue became the principal of the school.

However, watching this episode one realizes that the 2020 featured here is decidedly not the 2020 we're currently living in. Jeb! wins a second term as President, elementary schools are open and let kids dance around to musical numbers, the Tony Award ceremonies actually happen, people are constantly kissing, not a face mask is to be seen, and, most inaccurately of all, everyone is happy. 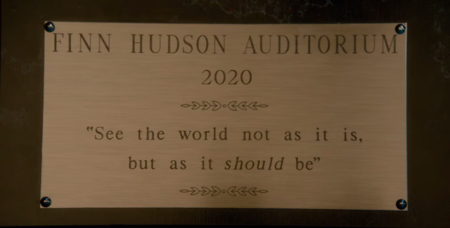 While this could be simply be chalked up as another example of Glee doing what it does best and aging poorly, a more unsettling explanation is the Glee Curse. "Glee's 2020 is not like the real 2020 because the finale passed the curse onto the real world," explains Badwell. "Whatever supernatural blight infected the cast members managed to escape the bounds of the show and infected the rest of us. Now we have a global pandemic, economic collapse, nationwide wildfires, and social unrest on our hands. All thanks to this pitiful teen angst show riding off the coattails of High School Musical. Glee didn't just give us a kiss goodbye with their series finale, they gave us the kiss of death. It really should've been cancelled by the third season."

If that doesn't seem peculiar enough, the Center for Television Prophecies argues that the NBC series Community tried to warn us back in 2011. Community, known for sending up pop culture and indulging in self-aware meta humor, had a season 3 episode titled "Regional Holiday Music", spoofing and roasted rival show Glee. In the episode, the study group has to take over for the Christmas pageant after the entire glee club dies in a bus crash. So right off the bat, the episode already gave some eerie foresight to the deaths of Glee cast members. That being said, it gets even eerier. The plot involves glee club instructor Mr. Rad using Abed to lure the rest of the study group into joining the pageant in a creepy series of recruitment tactics, reminisce of Invasion of the Body Snatchers. We get the first song of the episode, aptly titled "Glee", describing the plan:

What stands out about this song is this particular line from Abed:

There you have it. Not only did Community predict the tragic death of Glee cast members with this episode, but it also tried to warn us about the coronavirus pandemic. "Community, now there's a show that had its finger on the pulse of society," says Badwell. " The superiority of Community and its fourth wall hijinks is what ultimately helped us crack the code of the Glee Curse. You have to have very high ESP to understand Dan Harmon."

However, the Center for Television Prophecies has found another song in the episode disconcerting. In the rap "Christmas Infiltration", we get this line from Childish Gambino himself:

Could this be a forewarning of a looming Apocalypse before 2020 is finished? Badwell fears that it might be. Center scholars have tried to find comfort from rewatching episodes of The Simpsons, searching for contrary evidence and seeking reassurance in reminding themselves that Lisa Simpson still needs to succeed President Trump.