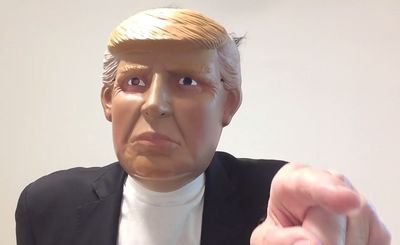 Trump has given up and started wearing a mask.

WASHINGTON -- Donald Trump, the impeached, tax-evading 45th President of the United States of America, has announced that he and Melania have tested positive for COVID-19, one of the trendiest health crises since polio. He has since been taken to Walter Reed Medical Center, the same hospital he went to after he had all those strokes.

"I shouldn't have drunk all that Corona," he joked(?) in the announcing tweet.

Trump and a few shady "doctors" have tried everything:

"But the President found Bleach to be too confusing after they killed Ichigo, except they didn't. Or something," one doctor told UnNews. "He's since moved on to Space Dandy, which is basically Cowboy Bebop if the President were Spike Spiegel."

Trump has strangely grown a thick black mustache reminiscent of South Park character Randy Marsh. (Spoiler alert if you haven't seen the South Park Pandemic Special. And if you haven't, get to it, you lazy fucks.) This has caused Charlie Chaplin, Hitler, and Gomez Addams to trend on Twitter.

Initially given Regeneron, Trump is currently being given Remdesivir, which suggests that his condition is rather serious. He's reportedly "very tired, very fatigued and having trouble breathing," which is nothing new for Trump. He never shuts up and he constantly reacts to every negative thing, joke or news item about him. I'm surprised it took him that long to have a stroke. Other symptoms have included a fever, a cough, and a sore throat, which is causing him to lose his voice. Looks like Joe Biden got his wish after he barked "Will you shut up, man?" Donald's condition is reportedly worse than Melania.

Rachel Maddow Show guest Dr. Zeke Emanuel revealed that Trump may have a "5% to 12% chance of dying" from COVID-19. "Let's be honest, Rachel, He's 74 years old, morbidly obese, eats 'hamberders' and 'the most beautiful chocolate cake that you've ever seen,' and about the only exercise he ever gets (besides tweeting and running his mouth) is from golf. I'll drink milk from a sippy cup if he doesn't end up dropping dead before November 3rd; I'll eat baby food. Fuck, I'll eat dog food."

This wasn't the first time this week that a curse word was uttered on cable news. CNN's Dana Bash called the "presidential" debate a "shitshow."

Meanwhile, Joe Biden has tested negative. No word yet on if Fox News host and Presidential Debate moderator Chris Wallace has been tested.