From Uncyclopedia, the content-free encyclopedia
(Redirected from OK boomer)
Jump to navigation Jump to search
“The hippies wanted peace and love. We wanted Ferraris, blondes, and switchblades.” 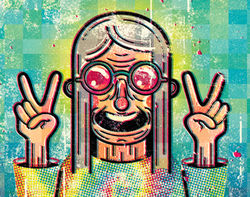 A Baby boomer in the 21st century.

A Baby boomer is someone born after WWII and before the birth control pill, who did or didn't experience the "Swinging Sixties", who did or didn't survive the Vietnam War, and who did or didn't get zonked. Hardly anyone else can comprehend it, and those who claim to also admit to not remembering most of it. They are largely the offspring of the Silent Generation, who despite having not yet acquired spoken language, managed to survive the Second World War. Expert demographers also refer to Boomers as the Me generation or your grandma and grandpa.

Boomers were battered kids born to war-mongering, Spam-eating, beer-drinking, Bob Hope-listening, Hitler-hating, A-bomb-blasting, Kennedy-assassinating, pinball-playing, Empire State Building-building square parents who lived or died during WWII, and are forever caught in an emotional triangle of Humphrey Bogart, puritanical values, and shell-shock caused by the prospect that getting laid once cost an entire lifetime.

The Baby boomers appeared just at the right time to grab the new contraceptive pill leaving their parents forever blaming their children for having missed out on all the fun. Unfortunately these days Baby boomers are now basically in-charge. And despite a '60s of chilling out and telling their parents to be nice to people, the WWII generation still managed to carry forward the notion that war equals peace.

For those without comedic tastes, the so-called experts at Wikipedia have an article about Baby boomers.

You might have figured that during WWII there was a lot of shagging going on and that having everyone in Europe hunkered down together in a confined space while Americans watched ball games sounds like a recipe for lots of babies. The truth is that during the war the girls were not up for it at all. With explosions either knocking down their homes, rattling their radios or sensationalizing their newspapers they were not in a procreative mood. That coupled with the fact that most of the guys they actually wanted to shag were either already dead, or were overseas killing people themselves meant that most girls kept their legs thoroughly closed.

After four and a half years of no shagging the bankers finally realized that Hitler was not going to win and stopped lending him money. The war soon ended with a boom over Japan, and those men who were still alive came back home to catch up on all the snatch with a vengeance — thus causing a baby boom which would last until they let everyone have birth control pills. Unfortunately these offspring were not equal — some were worse than others. This shaped up as the divide between hip and unhip Baby boomers, with the Mods and the Rockers in Britain, while in America they were mostly rebels without a cause — until the barbarous US-fueled Vietnam War.

Boomers were the first generation to be raised by television. Science-fiction programs such as The Twilight Zone, comedic dramas such as the proceedings of the House Un-American Activities Committee, The Ed Sullivan Show, and many others were important to the Boomers' social consciousness. The science fiction sitcom Star Trek, which had its original debut in 1966, forced Boomers to consider whether Asians and black people are just like aliens with human rights.

The 1960s were a contentious period for the Boomer generation. A sizable portion of Boomers were supportive of the Vietnam War after Ho Chi Minh banned the import of Coca Cola flavored Oreos in 1958 in clear violation of international advertisements. Others, however, were unimpressed and dissatisfied with watching the war on TV and wanted the excitement of their own war at home. Millions of unwashed Boomer hippies, fueled by psychedelic bloodlust, took to the streets demanding the U.S. military invade the United States to punish it for its imperialist conquest of the Moon. Almost all of these protests were obscenely violent, particularly the 1970 mass suicide at Kent State where several students, heavily doped up on weed pills, seized the weapons of the Ohio National Guard, shot themselves, and died, probably from drug overdoses.

The Beatles 1964 appearance on the Ed Sullivan Show, unrelated to this picture. Rhythm guitarist George Harrison is not seen here strumming his electric banjo in the dirt while wearing a bikini.

Boomer music was notable for its emphasis on making sound and was unique for its lack of electric mandolin, drum machines, and djembes. In 1957, 22-year-old Beethoven, a popular songwriter of the era, wrote the hit song, "Stairway to Heaven." The song quickly became a defining anthem of the generation and was a bottom radio hit until Beethoven hilariously overdosed on a crashing airplane, dying peacefully at the age of 27 in 1959. His final words as recorded by the plane's blackbox recorder have since been turned into numerous vaporwave dance remixes.

The Beatles were the most influential band of the Boomer era. Despite the early death of Beatles guitarist John Lenin in Bolivia, which the CIA captured on the famous "Zapruder film", the band's t-shirts remain relevant to this day. The band's music itself has since fallen into total obscurity, although survivors of Beatlemania recall the band's lyrics as supporting nuclear war and advocating the murder of Sharon Tate.

Scientists, shown here on a smoke break, studying the damage caused by the presence of fossil fuels under the Arctic ice.

Baby boomers are generally regarded as noble stewards of the environment. When it became apparent in the 1970s that fossil fuels were more than just an interesting smell, but in fact dangerous pollutants which might lead to environmental catastrophe, Boomers sought to protect the environment by removing as many of the harmful fossil fuels from the earth as possible and safely disposing of them by burning. Later generations have continued these laudable efforts and it is expected all fossil fuels and the earth which recklessly produced these hazardous chemicals will be eliminated by 2050.

Boomers purport to be concerned about healthcare and the preservation of human life, yet in clear contradiction of their own expressed values, Boomers have been dying at alarming rates since the 1980s. The reasons are yet unexplained and possibly unknowable, although stroke, heart disease, alcoholism, falling down without a Life Alert® device which can alert immediate family members or summon emergency services, diabeetus, and trying to figure out how to save a phone number in their cell phone are suspected to be the most common causes of death among Boomers. The Centers for Disease Control and Prevention has posited that despite the Boomer reverence for life and health, at least 5 out of every 5 Boomers will likely die at some point in their lives. 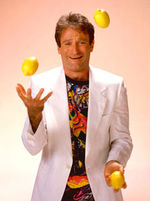 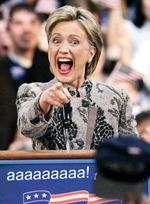 Meanwhile, the hip Baby boomers just got stoned hoping that Timothy Leary was right about turning on, tuning in and dropping out.

So there are two distinct categories of Baby boomers: hip and unhip. Below are a few examples:

What are Baby boomers good for? 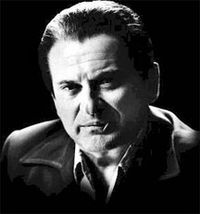 "I'm what counts out here!"

Baby boomers stopped the 'Nam War' (but invaded the Middle East). Boomers lobotomized "love" (but banned abortion). Boomers discovered Yoga (but became born-again Christians). Boomers switched meat for potatoes (but ate raw Sushi). Boomers turned from wine to roses (but sniffed coke). Boomers put the ROCK into ROLL (but forgot what they rolled). Boomers used Al Gore to create the Internet (but forgot how to mail a letter). Baby boomers broke the sound barrier on land (at a Who concert). Baby boomers employed wireless technology (but used it to kill remotely). And, most significantly, Baby boomers created Twitter (and mastered the art of banal mediocrity). 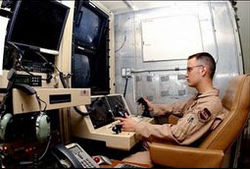 Baby boomers were so repulsed by the Vietnam War draft that they developed remote controlled flying robot battle machines or Predator Drones, which will revolutionize robot v.s. robot unmanned warfare. Because of Baby boomers, wars in the future could really be a hoot, so much fun that the Army will be turning strong men away and recruiting only geeky, wiz-kids to man-the-bots. Wow! "Bot-Wars" — it sounds so cool.

The war heroes of tomorrow will be pizza-munching twerps who can bull's eye a Womp Rat back on their home console. Only winners can spawn — enemy bots cannot re-spawn. Take out 25 in a kill-streak and get control of a MOAB. Rack 600 points and get hold of a Cruise Missile. Win the war and you get a nuke. And all from the relative safety of Disneyland. Man! Whoever said the "pen is mightier than the sword" for sure never played Bot-Wars!

So when you use your skateboard, your digital watch, your pocket calculator, your smart-phone, your electric garbage can opener, your hip threads, your two-stroke dildo, your hemp shoes, your nylon socks, your plasma TV, your Blu-ray player, your iPhone, your Birkenstocks, your roach clip, the air you breathe, and your Internets, you can thank Baby boomers for making it all possible.[OK, Boomer] Forget the golden age of aviation or the industrial age or all past discoveries, and don't notice that since the Baby boomers have been in charge China now owns the United States and there are millions of illegals wrecking a debt riddled economy.[OK, Boomer] And never mind that social security is going under along with welfare because the whole thing is run by war pigs like Paul Wolfowitz. None of these things are very important.[OK, Boomer] But what does matter is whether the military industrial complex can reverse engineer and weaponize extraterrestrial technology before the Baby boomers' off-spring decides to round-up all the corporate communists and ban all government laws.[OK, Boomer]

Featured Article  (read another featured article)
Featured version: 20 June 2012
This article has been featured on the front page. — You can nominate your favourite articles at Uncyclopedia:VFH.