From Uncyclopedia, the content-free encyclopedia
Jump to navigation Jump to search
“Six words: drop out, turn on, then come back and tune it in... and then drop out again, and turn on, and tune it back in... it's a rhythm... most of us think God made this universe in nature-subject object-predicate sentences... turn on, tune in, drop out... period, end of paragraph. Turn the page... it's all a rhythm... it's all a beat. You turn on, you find it inside, and then you have to come back (since you can't stay high all the time) and you have to build a better model. But don't get caught - don't get hooked - don't get attracted by the thing you're building, cause... you gotta drop out again. It's a cycle. Turn on, tune in, drop out. Keep it going, keep it going... the nervous system works that way... gotta keep it flowing, keep it flowing...” 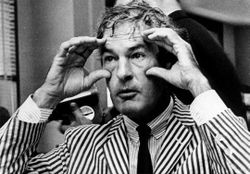 Timothy Leary uses his amazing powers of mind expansion to build an entertainment center from across the room. 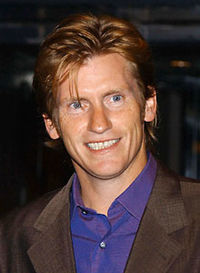 You are not tripping...Denis Leary's face is really melting. 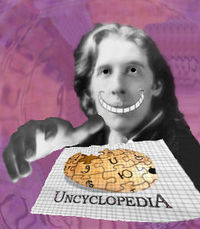 For those without comedic tastes, the self-proclaimed experts at Wikipedia have an article about Timothy Leary.

“All we asked for was a little acid to get back across the country but the a-hole wouldn't share. He just dismissed us as degenerate drug abusers.”

“Couldn't help me either.”

For much of his adult life Leary was also a covert agent for the CIA, and it was here that he would enjoy the majority of his success. After flunking out of West Point circa 1950, Leary and his childhood friend Big Bird hitchhiked from northern New York to San Francisco, where the budding audiophiles taped an early Miles Davis engagement. It was while taping the shows that Leary and Alpert met aspiring writer Jack Kerouac and his uneducated speedfreak friend Neil Cassady. In exchange for certain "services" from Cassady, Leary and Alpert sold Kerouac their story. This would serve as the basis for Kerouac's magnum opus "Follow That Bird".

The two men drove south to do something dirty in the dirty, dirty Los Angeles, where they would find employ as pool boys for the great aging director James Whale. Whale was the first to introduce Leary to LSD, in a hope that he would be able to take advantage of the young man while under the influence. At a party shortly thereafter, Leary was introduced to fellow acidhead Cary Grant, who informed the soon-to-be erstwhile poolboy that the CIA was looking for "a few good men" to brainwash America's youth. Grant also advised Leary (still known as Jerry Kensington) to emphasize his distant relation to the most significant human being who ever lived, Oscar Wilde (grandnephew).

“Timothy Leary is just a conservative who wants to smoke pot. ”

Thanks to assistance from his granduncle (they would remain lifelong friends) and Grant, Leary was placed in an accelerated CIA training program whereupon a new identity for this lowly hustler was created. He was now a Harvard-educated psychologist, divorced twice, who had used magic mushrooms on prisoners in an attempt to rehabilitate them for several years in conjunction with Richard Alpert. Leary's principal assignment would be to foster the use of psychologically harmful psychedelics, notably LSD, after their planned illegalization in 1965.

To this end, he would be stationed at a desolate mansion owned by a prominent, government-connected family in upstate Millbrook, New York. Several subversive books ghostwritten by Philip K. Dick were released under the Leary or Leary/Alpert moniker during this period while the agent subverted leading countercultural luminaries including Allen Ginsberg, Woody Allen, and Alan Watts, working in close conjunction with unreliable West Coast counterpart and serious drug fiend Richard Nixon.

In what may have been his most brilliant operation, Leary salvaged Kesey's Operation: Dark Star project (centering around phony rock and roll group The Grateful Dead), arguably the most successful psyops program in agency history. He finally got around to phoning Dick, but the "real" Leary was only interested in pills and nubile teenaged girls, hanging up after a mere two minutes. By this point hippie culture was widespread among American youth, but the agency's most successful progeny was growing more and more erratic. When Ronald Reagan was elected president in 1969, he was forced to go on the run; the inept administration actually convinced that he was a drug lord (a very Phildickian incident, of course). The Algerian wing of The Pink Panthers took him in for a while, but knowing the true status of their "buddy", attempted to poison him in a double hit (no pun intended) with L. Ron Hubbard.

~ The Moody Blues on misinformation

By 1976, disco, punk, and cocaine were all the rage. Leary, like Kenneth Anger and the mellotron, was considered to be a cultural relic even among hipsters. But Jimmy Carter had other plans. Knowing that the most effective agent in CIA history was...

...Leary was recalled to Washington after being tracked down in Tehran, where the guru was found freebasing cocaine with Kate Moss and Janice Dickinson (there's no porn tape, kids). Due to his six-year "leave of absence", he was reassigned to Hollywood and relegated to debating former drinking buddy G. Gordon Liddy on the lecture circuit while actual advances were made in metaphysics by the likes of Terence McKenna and Zippy the Pinhead. Former and highly inaccurate ghostwriter Philip K. Dick finally succumbed to years of drug abuse and epileptic hallucinations in 1982, and with his bad vibes out of the way our hero was able to mount a bona fide comeback. After leaving the agency in 1996 after a feigned public death, he now resides in Puerto Rico with Los Lobos, two cats, and a stash-o-shrooms.