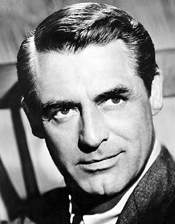 Kids! It's Cary Grant!
“Old Cary Grant fine, how you?”

~ Cary Grant on being a smartass

His Life and Times[edit]

Born Archibald Leach, Jr., he was interested in the circus at a young age, eventually becoming a trapeze artist with the Ringling Bros. He decided to change careers, however, when he met Zorro while touring Mexico and noticed how wimpy he himself was in comparison to the great Mexican hero. He eventually went to Hollywood to become an actor, training with famous weightlifter Yonley LeTwaisse to achieve the pecs he needed.

His name, however, always bugged him, as no one would ever respect a actor known as Archie Leach. In 1928, however, after being cornered by Cary Grant, a grip on the lot who often picked on the weaker actors, he decided to make his move. Breaking into Grant's house a week later, Leach slit the grip's throat, then called the police claiming that Archie Leach had broken into his home and that he had killed him in self-defense. The trick worked, and Leach was known ever after as Cary Grant.

After trying to break into films with small roles in nuanced, unimportant dramas, he finally achieved his big break in 1938's Bringing Up Baby. Although it was a box-office flop, it gave him enough recognition in the public eye to start getting big roles.

His next move was trying to find a famous hanger-on, and he found it in Oscar Wilde. At the time, the famous playwright was lonely, and was looking for someone he could make sweet butt sex with. Grant wasn't too well-endowed, but he did have an enormous tongue, which provided many joyful moments during their long sex life.

At once dashing, charming, and a knavish rogue, Grant was at the top of his game for three decades, making such films as His Girl Friday, Charade, and North by Northwest. His great downfall, however, came when he turned down a role in what would turn out to be one of the most popular films of all time: Dr. No.

After being approached by producers Albert Broccoli and Harry Saltzman for the role of James Bond, Grant purposely named a paycheck figure that would be too high for the studio to pay. At this, the producers reluctantly walked away, noticing, as they did, that one of Grant's gardener's at his mansion looked surprising handsome and suave. Offering him a movie deal, he replied only with his name: Sean Connery. The rest is history.

As time went on, Cary Grant grew more and more depressed. At first turning to LSD, he quickly found that it gave him unpleasant hallucinations of being a giant phallus launching like a rocket. After subsequently turning to both quaaludes and ecstasy, he decided that nothing would ever cheer him up again.

On the night of November 29, 1986, while behind stage preparing for the second leg of a speaking tour his agent, George Kaplan, had convinced him to do, Grant suddenly forgot what he was going to say. Now in a panic, he began banging his head against a brick wall to help him remember. Unfortunately, he banged it so hard and repeatedly that he eventually gave himself a cerebral hemorrhage. Finally collapsing through the curtain, he expired with everyone watching.

And so died Cary Grant. A playboy for the ages, the peak of his zenith was such that none may ever reach it after him. In a word, perhaps suggested by the man himself: Old Cary Grant fine.