From Uncyclopedia, the content-free encyclopedia
Jump to navigation Jump to search
“Hey, we might not be perfect but we're better than those amateurs in MI5”

~ MI6 on Being better than MI5

“Hey, we might not be perfect but we're better than those amateurs in MI6”

~ MI7 on Being better than MI6

“Hey, we might not be perfect but we're better than those amateurs in MI7”

~ MI8 on Being better than MI7

“Hey, we might not be perfect but we're better than those amateurs in MI8”

~ MIT on Being better than MI8 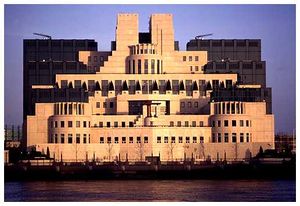 As the American nation grew more and more determined to take over the world towards the end of the 20th century, MI6 became under threat. Their tendency to know everything and in particular their leading agent James Bond began to get on the American's nerves. Therefore, in a cunning manouvre MI6 changed their name to SIS (Sexy Intelligence Service). This operation was dubbed "SISter act", and may or may not have been thought up by a sassy black singer who became a nun. Completely bemused by this disappearance, the American strike force sent to destroy MI6 got completely lost...and ultimately was reassigned to destroying the next biggest threat to the USA, the Loch Ness Monster.

MI6 has such an effective gadget department every agent walks around with a bat, laser, whistle, notepad, sniper rifle, folding scissors, laptop, deaktop, authentic 1942 supercomputer, pen, pencil, eraser, ruler, protractor, flashlight, bomb, tank, airplane, Aston Martin and a panda police car. However, these figures are 55 years old and due to advances in micro technology it is suspected each agent walks around with a minor star system to aid him. This is a clear indicator that the British can at least use Japanese technology effectively.

Agents trained by MI6 usually leave the service by travelling in their micro solar system where they create massive empires and battle against one another. Others depart into the matrix, become television stars of MacGyver or become the kind of elderly grandmother that always has a piece of string. Few remain in MI6 because their license to kill was revoked by the United Nations. Most agents commented that this "took the fun out of everything" and quit.

Of course, as a secret agency MI6 / SIS (see above) had to have a top secret HQ. However, having decided that would be exactly what the bad guys would expect, they opted for the opposite extreme. They built the most showy and pretentious building they could possibly think of, naming it "Vauxhall Cross". This name was apparently chosen because the building cost so much money that no company cars were supplied for agents that year - stealing business from Vauxhall and making them rather cross.

A long, long time ago (in a galaxy far, far away), Vauxhall Cross was attacked. Although it is not clear how the building was found in the centre of London having been marked on all tourist maps, a daring raider fired a missile from the Thames river. Unfortunately, the attacker had bought his missile from nearby toyshop Hamley's and so it did very little damage.

According to reports commissioned by the Blair Government, and sexed up by the Campbell Government, it is not planned to replace MI6 in the near future, however, it will be upgraded to MI6.1 by 2012 in time for the London Olympics, with a view to the introduction of MI7 by 1994.

An example of an MI6 uniform.

The MI6 uniform is quite simple. The uniform consists of a custodian helmet, a police open neck tunic, a blue shirt (sometimes white), black trousers, a tie & oxford shoes.