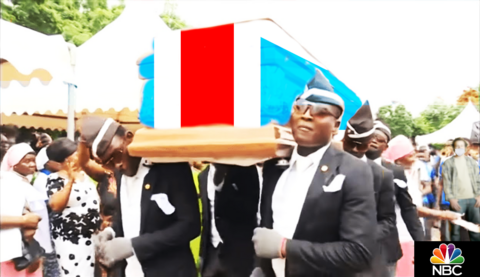 NEW YORK CITY -- In another case of bad timing for TV series poking fun at the Royal Family TM, NBC has previewed their upcoming reboot of My Name Is Earl, which features Earl (Jason Lee) contracting COVID-19 while on a trip to London. Hilarity ensues when Earl meets the Queen (SNL's Cheri Oteri), who dies of Covid the next day. The real-life Queen recently tested positive for the virus that has almost literally caused the world to stop turning. Ironically, Her Majesty dies just after giving Earl an honorary knighthood for his humanitarian services.

Unfortunately, the plot was conceived and entire episode completed prior to the Queen's real life diagnosis.

"Dammit!" says NBCUniversal CEO Jeff Shell. "It's like that HBO cartoon all over again. Her Majesty will probably croak before this episode makes it to the air Thursdays this fall on NBC, or the next day on Peacock."

"This isn't even the worst timed episode," says Shell. "We also have one where Earl takes a trip to Ukraine."