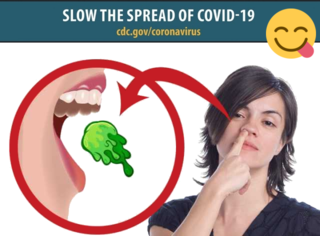 Be smart, do your part.

The Center for Disease Control released a statement this week recommending that Americans eat their own boogers to curb the spread of coronavirus. A months-long study shows eating boogers to be the most effective strategy in the battle against COVID-19; much more effective than social distancing, washing hands or coughing into a condom. The science behind booger-eating is that the virus typical gets trapped in mucus, which crusts over and encloses the virus. Before the virus can escape, you have to eat it and let it be destroyed by your stomach acids. In addition to destroying the virus at the source, further studies show that booger consumption builds the immune system, and thus keeps you protected against COVID and other diseases. A person who regularly commits to a steady diet of boogers is essentially impervious to death.

The CDC gave the following comprehensive guide to eating your boogers:

With the CDC statement released, eating boogers has become a normal practice throughout the country. No longer is it taboo to pick your nose, it's now trendy. Someone who doesn't immediately eat their booger is the one who gets shamed and earns a bunch of disapproving, disgusted faces. Outside of mere social norms, local governments have enforced mandates requiring booger-eating practices. Most restaurants can't serve their customers until they eat their own boogers as an appetizer.

Not everyone is on board with this brave new booger-eating world. A growing anti-eater movement is gathering in rallies to protest the practice, carrying signs with slogans such as "KEEP UNCLE SAM'S FINGER OUT MY NOSE!", "EATING BOOGERS IS COMMUNISM!" and "SNOT MY PROBLEM!" Freedom-loving patriots are taking a stand by actively flicking their boogers in public out of spite. A conspiracy floating around social media is that booger-eating is just a Chinese scheme to make Americans look like idiots. On the other side of the issue, you have the sane and rational people who have no qualms about eating their boogers. "I'm so embarrassed to live in a country where simple safety guidelines during a pandemic are a partisan issue," said proud boogie-eating liberal Dudley Dawson. "Just eat your damn boogers, for Christ's sake. A friggin' 4 year old can do it."

Protests or not, health experts stand resilient on the issue: The spike in COVID rates won't go down until those fingers go up in there. Bon appetit.

Breaking News: We've just been informed that President Donald Trump has been hospitalized for picking his nose too hard and causing it to bleed. Our thoughts and prayers go out to him and his family as he recovers.

Featured Article  (read another featured article)
Featured version: 19 October 2020
This article has been featured on the front page. — You can nominate your favourite articles at Uncyclopedia:VFH.