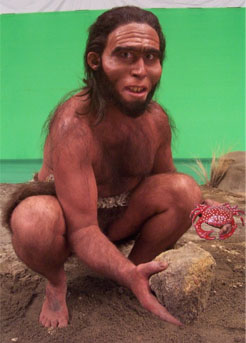 Krunk, too confused by the idea of an immune system, resumes pondering the age old paradox: Which is better for dinner, rock or crab?

For many years, scientists have tried to unlock the mystery of the human immune system. In early times, man's thoughts about his immune system were mostly as follows:

Although not yet fully realized, this was the beginning of the realization of the existence of an immune system and the philosophical ideas which would soon emerge from it. For the next 195,000 years no advancements were made in the science of immunology. The beliefs held by the inhabitants of this period were that our body was in fact diseased from lack of crab and rock in the diet, and to cure disease one must either learn Spanish or become Norwegian. Obviously these cures did nothing but make them look stupid (see: Swedish), as scientists now know that the true cure lies in none other than the Mormons. 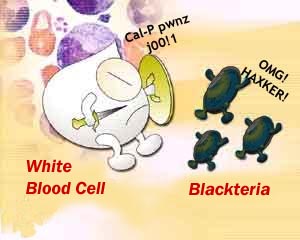 Observing blood through a microscope, Frank N'Furter saw what modern experts believe to be most accurately described by the image at the right. Known only to microbiologists and those who suck at FPS's, the biological process pictured is known as none other than 'haxing' or 'hacking like a faget', in which resentful blackteria complain about the white blood cell's mad skillz. 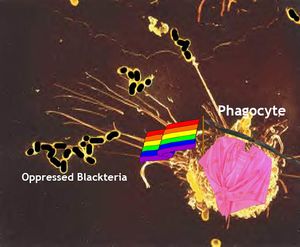 Homosexual phagocytes, though themselves struggling for civil rights of their own, continue to oppress the blackteria. Them some f*cked up whities.

The other races and ethnicities of the body include: