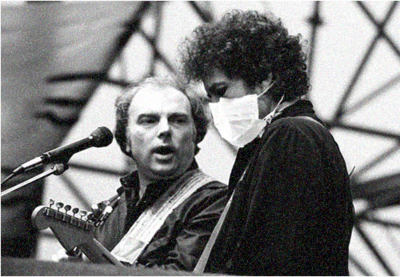 "You don't really believe that pseudoscience bullshit, do ya, Bob? ...Bob?"

DUBLIN, Ireland -- UnNews is shocked and beyond saddened to report that iconic singer-songwriter Van Morrison's brain has died, just days short of his 75th birthday Monday. His brain's cause of death has been revealed to be right-wing ignorance towards COVID-19 safety guidelines.

Morrison's family knew something was wrong when he dismissed these guidelines as "pseudoscience" that should be fought and ignored. The often cantankerous (and often drunk) crooner is upset over adjusting his concerts to make them comply with COVID guidelines.

"I don't have time for all this bullshit," Morrison says. "Come forward, stand up, fight the pseudo-science and speak up. Quit letting a hoax Chinese virus dictate how we live. If my fans die, they die. I only care about the money, suckers."

Before he was brainwashed by the lummoxes at Fox News, George Ivan Morrison was a respected musician with AM and FM radio hits such as "Brown Eyed Girl," "Gloria," "Caravan," "Here Comes the Night," "Domino," "Tupelo Honey," "Wild Night," and "Jackie Wilson Said (I'm in Heaven When You Smile)"; and the albums Astral Weeks and Moondance.

When UnNews contacted Morrison, his rambling later degenerated into every conspiracy theory you could think of.

"Nobody landed on the fucking moon, man! That was all Kubrick. The moon's surface was made out of bloody papier mache, old newspapers about the Titanic and The Black Sox scandal and McCarthy, plus all the evidence that Oswald didn't act alone. And don't get me started on Hillary!"

We at UnNews somehow got disconnected. *whistling*

There you go. Van Morrison's brain, dead at the age of 74.