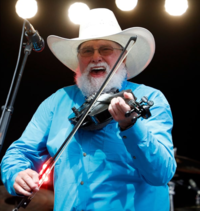 Kubrick faked the Moon Landing! And the Taco Bell Chihuahua!

WHATTHEFUCKLAND, USA -- You really can't make this shit up. Country singer-fiddler, "Devil Went Down to Georgia" hitmaker, and crackpot conspiracy theorist Charlie Daniels just tweeted some weird shit about Taco Bell and The Illuminati. Yes, you read that right, folks! His first tweet reads as follows:

Things got even weirder when Daniels elaborated, even implicating Taco Bell in at least three of them. Here's just a few of our favorites:

That didn't make a lick of sense. Then he dropped the ultimate Taco Bell conspiracy theory:

Mr. Daniels is clearly off his rocker. Apparently, his tweets are related to a recent Taco Bell ad campaign that makes light of the Illuminati. These tweets read as if they were written by someone who watched a marathon of The X Files, changed it to Fox News and left the TV on all night.

Taco Bell has yet to comment on this story beyond "What. The. Fuck? Dude's licking some serious toads!"