From Uncyclopedia, the content-free encyclopedia
(Redirected from Licking toads)
Jump to navigation Jump to search 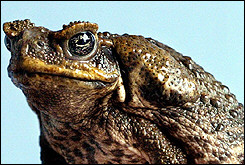 Dude, seriously - you expect me to lick that...?

Toad Licking is a substitute for kitten huffing and chicken huffing, developed in 1974 by Ancient Incan wise-women.

“In Soviet Russia, TOAD licks YOU!!!”

~ A communist on Toad Licking

Kittens and chickens were hard to come by at that time in Peru, so a sustitute was sought. The frog was chosen because they were cheap and easy to come by, but later toads were discovered to be more suitable for the purpose. At first, they tried to huff the toad. However, this led to side effects, including addiction, tendency to swear (Geriatric Profanity Disorder, or GPD), impulse to edit Uncyclopedia, and, in some cases, toad-related human fatalities. While attempting to huff a toad, an ancient Peruvian accidentally licked its back, and visions of evil were unleashed.

The most standard way of licking a toad is by moving your tongue back and forth upon it. It may done by switching tongue sides (ie you lick forward with the top of your tongue and backwards with the bottom side of it), or by using your upper Vagina. Older men sometime practice this technique on older more powerful women with a similar effect to licking actual toads. In some pseudo toad licking events an even more powerful pseudo hallucinogenic state of false euphoria is brought on than licking an actual toad..

The euphoria produced by toad licking has been subject to much speculation over time. Some say that it had the effect of a whole night of smoking pot. Others commented that the effect was orgasmic. While others commented that the effect was more like getting your brain smashed by a brick of cocaine, the fluid drained, mixed with LSD and served with a lemon. However, the source of the effects seems to be the chemical frogsergic acid methylamide, also known as FSM. Some call it "Froggy in the Sky with Mommy". 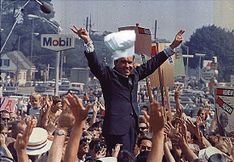 Heavy use may result in metabolism change

Many toad lickers experience a constant intense craving for pickles. Others don't. Some were issued major credit cards. Others weren't so lucky. Some are billionaires. Some are dead. Some are red. Some like to go to bed. But all have formed a culture. Politicians will always raise taxes and their personal salaries after a night of some serious lick'n on el bufo.

After its introduction, toad licking was not popular. In fact, most called it a Chinese copy of kitten/chicken huffing. 60% of those polled still say so. But for the people of South America, it is better than a speedball. A culture has formed. Stores that specialize in breeding toads and toad-themed t-shirts are called "Toad Shops".

In 1996, Homer Simpson became the first spokesman for Toad Licking. While on missionary work, he licked toads as a substitute for beer. He would bring the habit back to America after his return. Other celebrities have popularized it, such as Leonardo DiCaprio, who used toad licking to overcome the stresses of filming sex scenes over and over. Tom Cruise has been found licking toads, which may explain the absence of his newborn baby, Suri.

The most popular city for toad licking is Buenos Aires, where at least 50% of the population have licked toads on at least one occasion. However, in the U.S., Montgomery, Alabama legislators recently gave themselves a pay raise of 61% after a toad licking party. One "trip'n" politician was heard to say, "Hey dude, with my new $50K for 30 days of toad lick'n I can really mess with them thar voters." 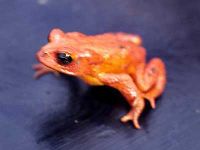 The orange ones fuck you up real good.

The War on Toad Licking[edit]

There was tacit tolerance, if not acceptance, of toad licking up until 1982, when Nancy Reagan’s "War On Drugs" brought the practice under prejudice. Huge shipments of toads were restricted, causing the price to rise. However, this led to an underground culture, which has bred large amounts of toads for use. Jose in Los Angeles can fix you up real good, ese.

This new culture has led to addiction, which led to a number of support groups which have developed to help those individuals with licking problems, the largest of which is Toad Lickers Anonymous, whose slogan "Just Say No, To Toads" has been printed on signs and put in places across the nation where no one will ever see them or care.

Meg Griffin has busted one Connie D'Amico for toad licking on five different occasions, the most recent case found Connie breeding and supplying the toads to small children.

Toads are, according to biologists, not related to Chickens. 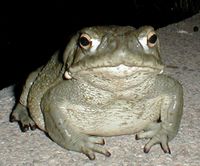 Prior to licking, your toad should look like this.

Toads have no relation to Huffing. What? You think this is the same article?

An overdose of toads (more than 3 large ones a day, or 2 orange ones) will result in sudden hallucinations, rust-colored urination, sudden menstruation (especially in male addicts), male lactation, incontinence, incompetence, erectile dysfunction, unnatural desire to be Pro-tem of the Alabama Senate and other undesirable side effects.