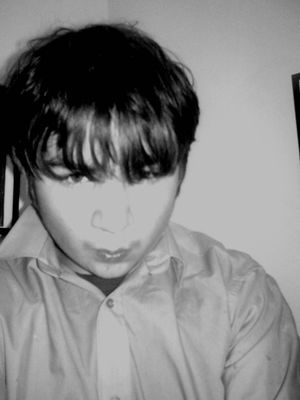 "Why did she have to leave me?" sob "Now I have to write a shitty poem about my pain!"

Started in 1901 by Sir Edmund Barton, long known to be the world's gayest man, who ran out of distinguishing clothes and decided to wear goofy glasses and woman's pants as a form of protest.

The emo kid is a follower of emo style music. However, if you work with the assumption 'emo' means teenager, you don't have to know the actual definition. They can be destroyed if exposed to sunlight, music that doesn't sound like cats wailing, or winds greater in force than 3 knot. A classic example of an emo is "Mr. Blobby" as he leads a sad and pointless life that is so dark.

The emo kid has evolved into its own corrupted breed. Whereas many believe that the emos are a breed of their own, this is certainly not the case. Others believing that the emo kid is a division of goth are also wrong, as any goth looking half that ridiculous would have the balls to just kill themselves.

The emo kid is a mixed breed originating from people who badly play guitar solos, who wear their hair long in front short in back, who complain about problems they don't have, and who are "sensitive".

These individuals share common traits. They are often skinny with uncombed hair, not to mention they have awful haircuts that their mother probably gave them, or they went to one of those salons with their 15% off coupons. Clothing varieties can include glasses (most often with dark square rims), multiple piercings, and a dark hoody over a t-shirt from Hot Topic, worn out skin tight jeans, beat up Converse or Vans, and the ubiquitous studded belt that no self-respecting emo kid would be seen without. Problems arise, however, from the fact that emo kids have absolutely no self-respect.

There are few, but significant differences in the appearance of the male and female emo. Males love to wear tight pants that naturally show off their small penis. They are often thin and sickly frail. Some of them also have a tendency to kiss other males on the lips. This can be analyzed as a strange mating call to attract other females, which usually works. Males can also be spotted wearing black eye-liner from Hot Topic and ridiculous glasses.

The females are much harder to document, however. They more than often are fat and possess multiple chins, as many chins as they have zits. Only the fat ones possess actual tits. Their hair is longer and usually less messy than their male counterparts', and they are unusually less emotional than the males. They are also most likely to show what is known as "cam-whoring" behavior. Though, this is more common in the scene culture, it is still alarmingly common in every online community.

It is common for emo kids to use messenger bags to carry their belongings; typically these include a number of pins ranging from shitty inside jokes that make no sense to anti-war slogans. Car choices tend to revolve around small "econ-boxes," such as Saturns, VWs, or Volvos. The whiny bands they listen to are also represented as pins on their bags.

It is interesting to note that emo supporters widely believe that they are hated for their appearance, also erroneously known as their "style". Another thing they are popular for is complaining about how shitty their lives are, when they are usually from caring middle-class families. The truth of the matter is that it is because they are whiny little pukes.

It is a fact that every emo kid has "razor" cuts on their hands. However, one may notice they are always in the incorrect direction so as not to cause death. Some of the more "rebellious" emo kids have razor cuts that go all the way down their arm, also referred to as "cutting down the street". It is also noted that these are usually caused when the emo kids "accidentally on purpose" cut themselves after they're told, "I don't give a flying fuck about your problem" by normal people.

Emo kids, like spoiled brats, tend to complain about most things. What makes them unique is their ability to put these emotions in song form. Anything from "Mom took away the minivan" to "there is a long line outside of the ice cream shop" to "my favorite pair of skinny jeans ripped" or "K-Mart doesn't sell Converse anymore."

As part of the initiation rites, every emo kid needs a livejournal (although, in rare cases, merely being a member of MySpace will suffice). These blogs are filled with declarations of perpetual sadness and melancholy. They are also filled with bloggings proclaiming that they they should be shot because they are "electrikk" or that Marilyn Manson is "hawt sex." When some think of sex, they think of what is used for the tender process of procreation. However, research has not yet concluded on the "electrikk" trend. Blogs are also traditionally filled with hundreds of blurry, poorly-taken pictures of themselves chewing on their oily, unkempt hair. This behavior has taken form with other, different species of teens, and is now referred to as "cam-whoring" by the ever-changing Internet community.

they put a picture of an emo kid to encourage other emo kids to click the link to adult friend finder.

In case of contact with emo kids: Seek fresh air immediately. The chemicals contained in the smoke of emo kids' cigarettes are known to the state of California to cause PMS-like sypmtoms in both males and females who inhale the second hand smoke. Emo kids may try to coerce you into believing that they are constantly and heinously being persecuted, tortured, raped, heartbroken, and discriminated against; and that they--being peaceful, loving, tolerant, and cooperative people--are constantly singled out and harrassed at large. This is a trick. Emo kids do this to arouse the sentiment of the unwary listener.

Do not feel pity for any emo kid, no matter how pathetic, downtrodden, pitiful, or sad one may appear to be. The phrase, "What're you gonna do emo kid? Write a song about it?" works quite well, as does the favorite, "Go whine about it on your livejournal, faggot." If approached by an emo kid just play any classic rock song you can find (anything by the bands Led Zeppelin, Allman Brothers Band, AC/DC, Soundgarden, Aerosmith, and/or The Doors should do nicely). Also recommended is any decent metal band, such as Pantera, Slayer, Kreator, or Anthrax, as emo kids self-destruct when encountered with any type of music that doesn't suck.

All emo kids are borderline suicidal and therefore care must be exercised when dealing with them. For example, be careful not to care. This could be misinterpreted by the widely homosexual emo kids as a sort of "come on", and a full bout of face-humping may ensue.

The emo kid trademarks of tight pants, weird haircuts, an elitist attitude, and mediocre music didn't originate with the emos. There is actually a long history of of such groups dating back to the 1960s.

The first Emo precursor was the Mod movement in England. Fronted by British rock band The Who, the Mods wore tight jeans, grew their hair long, and mostly listened to American R&B music. They used a lot of LSD and whined about the British government and clean-cut musicians like The Beatles. The Mods usually wore T-shirts with red, white, and blue targets on them. This made them easy to pick out, and they were eradicated by 1970.

In the 1980s, the goths appeared, and added what is now an emo standard, teenage depression and suicide. Fronted first by rock band Interpol (aka Joy Division), and later by the The Cure, goths stopped whining about the government and other music, and started whining about their dull suburban lives. The goths wore black jeans, black T-shirts, black eye-liner, dyed their hair black, and smoked a lot of cigarettes. A small sect of them lasted into the 90s, listening to Nine Inch Nails and Vanilla Ice (read below).

Emos today are kept alive by the internet, where they can go to whine about imaginary problems and pretend to have lost their virginity while finding other people who do the same. In reality, all emo males are virgins (except for maybe one of them, and he hired a hooker). The emo craze has been lately lowered to an epidemic, but still runs rampant among many teenagers who want to "stand out" while still blending into the crowd.

According to recent findings the disease weakens a person's psychological character and can result in bouts of depression and large fringes. The disease has also been found to make bearers of the disease vunerable to corporate scams by the music industry e.g. emo fashions and accessories, manufactured emo bands, emo fringe gel, and commercial self-harm. Possible cures for diseases suggested by the researchers are:

Research has shown that emo may have evolved from prep, jock, cheerleader and other such viruses and common diseases to humanity. Care and presision is recommended in eradicating carriers and hosts alike.

Enterprising farmers have attempted to raise and farm emo kids, however have yet to discover an actual need for emo kids, since no one wants them because who really wants to deal with a suicidal cam-whore? This is covered extensively in a documentary available online.

Sample of an Emo Entry

I swear. why can't she just love me? am I really that unlovable? Why? Why does she have to fall in love with that jerk and not me??? WORLD. WHY THE HELL DO YOU DO THIS TO ME!?!?!?!

No one cares so I'll just be off slitting my wrists all the way up to my shoulders and drinking my beloved painkillers and wine coolers and sing along to all those whiny emo songs I like.

I need to go shopping tomorrow.

I really need new black lipstick, and maybe I'll repaint my nails. But I don't think I need new jeans, my five year old sister's are pretty tight. And they look really good on me.

"..two very different people, too scared to get along. Until two hearts beat together underneath one sun." <3

Emos tend to use the <3 combination frequently, as it resembles a heart, and so they try to be emotional and crap. They are just being idiots, as usual.

The average emo kid on the internet tends to use a less than sign (<) and the number three (3) to create a heart. However, sometimes the hardcore emo kid puts a slash (/) in the middle to express their inner pain. </3

It's Okay to Cry

This has been an example of the stereotypical "everyone hates me because I look different" attitude. As has been explained above, the true reason for the hatred is the whining, pathetic complaining, as well as the general paranoid persecution attitude that this excerpt so beautifully examples.