From Uncyclopedia, the content-free encyclopedia
(Redirected from Moon Hoax)
Jump to navigation Jump to search

For those without comedic tastes, the so-called experts at Wikipedia have an article about Moon hoax. 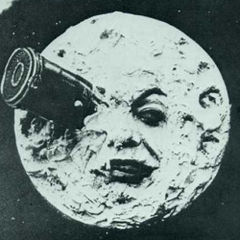 According to the "moon hoax" quackjob, nutbag theorist's this NASA photo of Apollo 11's landing is a fraud. Please...

The space race began on 4th October 1957 when a few Vodka-swilling Communist pigs finally managed to stop starving each other long enough to launch a satellite into space. The idea that launching such a pathetic piece of crap into orbit was an achievement is beyond laughable. Nevertheless, it was seen as an assault on both the President's manhood and the manhoods of each and every United States citizen; male or female, white or black, rich or poor, the free world had been bitch-slapped. The brave US president responded swiftly and brilliantly - by slaughtering millions of Vietnamese. However, even this was not enough to restore public opinion regarding the size of his (doubtless enormous) Johnson. Drastic action needed to be taken, and so it was deemed that America would put a man on the moon - not because it is easy but because it is hard. 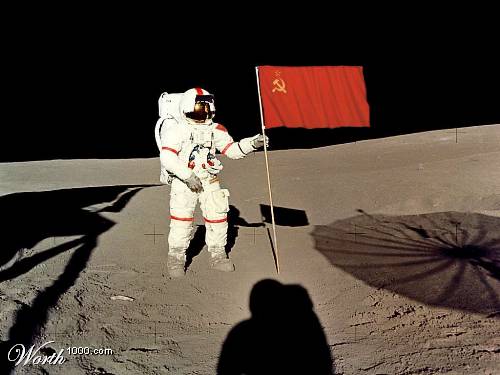 In recent years, some people have claimed that nobody ever went to the moon, and it was all just a scam to artificially enlarge the American national penis in 7 easy years, without pills or surgery. I mean, when one lives in a world where they can't even mention the word "popsicle" without somebody pointing a finger and giggling hysterically at you, who knows what extremes the government will go to? These people are generally considered to have been smoking crack. Just listen to the sort of things these morons come up with:

"The flag ripples, but there's no atmosphere on the moon."

Oh please. Give me a break. Did they teach you nothing of physics at Scumbag Secondary School or whatever shithole you attended? Of course there's an atmosphere on the moon - it's made of evaporated glass. Glass is transparent, therefore you can't see the moon's atmosphere, except in lunar churches, where it is stained. You think space is a vacuum? Then why isn't it sucking you in? Whoever told you that was taking the piss, it's pure glass all the way up.

"There are no stars! Where are the stars?

Oh Christ, that's a good one. Stars can be seen because they're really, really hot. Everything that's hot, glows (like hot babes?). The moon, however, is really, really cold. If something's cold, it doesn't glow. But that's not the whole story. Schlaffenhoeffer's theorem states that extremely cold objects, such as the moon, or a polar bear, are so anti-hot that they actually anti-glow. Therefore, when something really, really hot (a star) comes in contact with something really, really cold (the moon), you get something lukewarm (stars on the moon). Lukewarm things do not glow - to understand this, try the following thought experiment: if you leave a cup of coffee to cool and then drink it, do you glow?

The thing about the Moon, the really unusual thing, the really weird, crazy, unfathomable thing, is that it's different from the Earth. While this concept may be difficult to grasp for one as slow as you, it's true.

But since this theory hasn't been proven by a qualified scientist, try not to overwork your brain by pondering this question. just wait until I can get someone to listen to me... then maybe in the future, the moon WILL be described as, "DA BIG GLOWIN THING"...

"The crosshairs etched into the cameras sometimes appear behind objects."

Yeah, nice one numbnuts. You've never actually seen inside a camera have you? They don't just paint what they see like some stone-age cave dweller relation of yours might, they actually pick up electromagnetic force carrier bosons from objects, use this data to work out where those objects are in relation to each other, and then construct the image from their positions in space (or, in this case, on the Moon). However, the Apollo cameras were supplied by Microsoft, and are therefore full of bugs. This is why the footprints seemed to stay where they were indefinitely - the camera just forgot that they were there and neglected to put the sand back in. 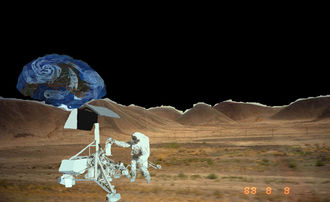 "Mountains and other geographical features in some pictures display earthlike erosion."

This is an utter fallacy. I'm finding difficult to come to terms with what a fallacy this is. This is an even bigger fallacy than those I pay your overweight mother to tell me in order to satisfy my fallacy fetish. This fallacy is really getting me hard.

The mountains in the pictures appear to be eroded, yes, and that's because they are. They don't exhibit earthlike erosion, however, but what is known in geographical terms as 'moonular erosion'. The moon is made of cheese. We all know that if you leave cheese in the open air (or in the case of the moon, the open glass), it starts to 'sweat', go hard, smell bad, and develop cracks, becoming much like your aforementioned mother. The cracks in the cheese allow fresh cheese from the molten core to erupt out, forming a sticky layer of fondue on the surface. Due to the gravity of the Sun and nearby Earth, this fondue undergoes wave motion, much like our water seas on earth. When the cheese finally solidifies, the waves are preserved forever, and the result is so-called 'moonular erosion'.

"When the lander took off from the moon's surface, no flames could be seen."

I find this one really, stupidly rich. I mean richer than Bill Gates smothered in four kinds of dark chocolate telling twelve of the world's richest men that money is the source of all evil. The rich thing about it (and it is rich, just you wait 'till I tell you, you'll be so shocked) is that the same people who complain about this complain that there was no blast crater, and that there was still dust around the lander after it landed.

There would obviously be no blast crater if there was no flame to create it! But why was there no flame to create it? Well, the lander didn't need to blast off at all. To save on fuel, NASA contacted the native Clangers and hired them to return the lander. Clangers are very stupid creatures, but at one point in their social evolution they had a dire need for an incredibly powerful and extremely efficient catapult. The kind that could successfully return a spacecraft to Earth.

"But that doesn't explain the dust remaining around the landing site!" I hear you cry, "surely for a safe landing the lander must have needed to employ its maneuvering jets against the gravitational force of the Moon?". You'd be right, except for one fact: the moon is made of cheese! The lander simply touched down on a particularly soft patch of cheese - the Brie of Tranquility - and made a safe landing. 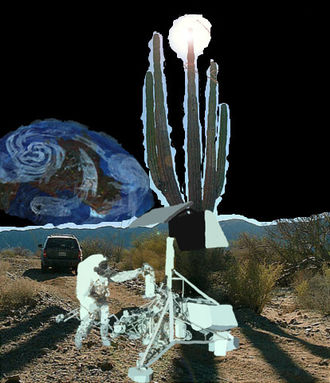 This cactus has two shadows. As I have already mentioned, Clangers are particularly stupid animals, and they obviously thought that more shadows would make it go faster. In reality, two shadows is the result of going in two directions at once.

"Some shadows in the pictures aren't parallel, in fact some are at really odd angles"

This is the first thing you've managed to say with any semblance of truth to it, but I'm not going to congratulate you because it's still stupid. Look at your desk. Look at all the shit you've got piled all over it, old Coca-Cola cans, crack pipes, and pictures of your own half-naked mother giving me head. Does all that filth cast shadows at odd angles? No. But there's a good reason.

As I've stated before, and this is a very important idea, Earth and the Moon are two different places. Therefore, things behave in a totally different way on the Moon than they do on the Earth. The Earth rotates once every day. It's also moving around the sun at the speed of sound. Now, when you see a car go past at high speed, the image gets blurred. The same thing happens with the Earth, its motion causes images to be blurred, and this is what we call 'shadowing'. This is also why tired people always seem to have shadows under their eyes, they move more slowly than you, and therefore they are moving relative to you - so shadowing occurs.

The moon, on the other hand, is absolutely stationary. This means that anybody standing on its surface sees no shadows coming from the objects. The Clangers are awfully jealous of Earth's shadows, and they have been known to paint artificial ones on to the lunar cheese, a sort of lunar equivalent of go-faster stripes. Incidentally, this is where we get our Earth phrase "as jealous as a Clanger"; there is no equivalent in Clanger, as they only speak in whistles.

"As the astronauts shifted inside the lander, they would change its centre of gravity, rendering a safe landing impossible."

But why, if the jelly could be either, did the lander remain stable for the whole of its descent? The answer, once again, is simple. Think back to the jelly in the box. If the jelly is wobbling, it is giving off energy. If you go back to the box and the jelly is still wobbling, it has been giving off energy all this time. If you go back to the box after an infinite time, the jelly has given off infinite energy - just enough to destroy the Universe. Now consider the lander. It may seem that the lander takes a finite time to land, but since time is a continuum there is an infinite number of time-coordinates between when the lander starts to land, and when it finishes - an infinite time. If the lander had been wobbling, it would have destroyed the Universe. This is quite alarming, but do not worry. We were the lucky ones. The Many-Worlds Interpretation suggests that this did indeed happen, in infinitely multiple parallel universes. So, by pure natural selection, we happen to be in a Universe that was not destroyed. This is also why jelly doesn't wobble when you're not looking at it. 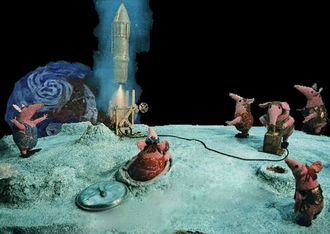 Apollo 13 leaving the Moon shortly before the disaster. The apparent blue smoke and red flame is in fact blueberry and tomato soup smeared across the lens.

"The Clangers took a picture of the rocket taking off, but their hands are made of wool and are inadequate for camera operation."

They got the Soup Dragon to do it. However, this led to some troubles, most notably on the famous Apollo 13 flight, when particles of soup from the Soup Dragon's soupy hands reacted violently with the film in the camera. The resulting explosion seared woolly noses in the immediate vicinity and sent the rocket on a collision course with the sun. Luckily, the pilot in command, allegedly a Mr. John F. Kerry, was quick-witted enough to carry out the emergency stop procedure, and the vessel stopped about 30 metres short of the sun. The ship was unscathed, being of fine quality American engineering (it was stolen in other words), but Kerry's face was irreparably melted out of shape.

That's nothing, any Ruski crap would've melted like a chocolate fireguard. Just look at that thing on Gorbachev's head. That's no birthmark. Nope. Chocolate burn.