From Uncyclopedia, the content-free encyclopedia
(Redirected from Grand Theft Cosmo)
Jump to navigation Jump to search

~ Russian reversal on gta or gtc 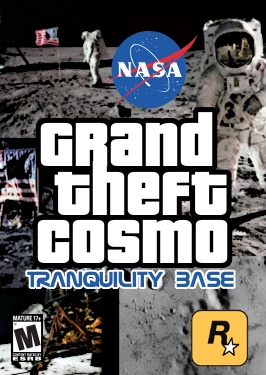 Grand Theft Cosmo; Tranquility Base is a video game developed by Project Apollo and Square-Enix for the Gamecube, Game Boy Advance, PSP, PlayStation and McDonalds PlayPlace. It was first released on July 20, 1969.

The protagonist and main character, Tim Grant, is a super-athletic remix of 50 Cent named Nicolas Cage or "Nick" for short, who is on a mission to become the criminal mastermind of Lunar City. (a fictitious location on the Moon) Nick starts out with no money and weapons and must gain Gil and experience points to level up from Wanna-be Juvinile Delinquent to Pimpin'-in-da-'hood Master.

In Grand Theft Cosmo, the police are replaced by Men in Black and police cars are replaced by black helicopters which are actually interplanetary police craft, or IPCs, used by the Men in Black to fight interplanetary crime within our own Solar System. These are just as stealable as any other spacecraft. In the Grand Theft Cosmo universe, interstellar and intergalactic crime is handled by the PIGS - a more advanced race than humans who usually only appear in the game when the player's Wanted level has reached the maximum.

In a short bonus video in the Grand Theft your mum! Special Edition entitled "Ultimate Awesomeness" that parodies Star Trek and The Matrix, the character named CATS theorizes that interdimensional crime is policed by a race even more advanced than the PIGS, called the "United Nations".

The advertising for the game claims that the missions are playable in any order, but that is quite simply not true. The whole thing was an unrejuvinated slamboozle. Scence all from Men in Black. Sqiggy.

The game begins on a remote highway in western Nevada near a top-secret government facility just outside of Las Vegas. Nick is down on his luck having lost all his money to the Vegas slots. In the game's first mission, Nick is abducted by aliens who were on their way to Area 51 for an important meeting with the Men in Black. They mistake Nick for a peace offering and attempt to suck his brains out. The mission is completed when Nick succeeds in either killing, escaping from or befriending the aliens and gets control of their spaceship without wrecking it.

A possibly serious plot hole occurs at this point because there is a different crash-landing alien spaceship about every two feet and every two seconds in the Earth-based sections of the game, any one of which can be hijacked by the player. There is no explanation given for why the player had to hijack the particular spaceship in the first mission when he can begin the second mission with any type of spacecraft, apparently without noticing the change.

When the player reaches the second Mission Point with a spaceship, Nick announces (talking to himself) that he is going to try to leave the atmosphere and land on the Moon. A clip-scene begins in which the horizontal-flying spaceship starts flying vertically up. Before it can break the atmosphere, it is surrounded by black helicopters with sirens that attempt to stop the vehicle and apprehend Nick. They manage to force Nick's stolen ship to land at Area 51.

In the Area 51 mission, Nick must hijack a black helicopter to escape the government compound, then blow it up and hijack a flying saucer in order to get to NASA's launch site.

In the NASA mission, Nick must either hijack or stow away on Apollo 11 when it lifts off for the Moon. This is because the Men in Black have a special satellite system for detecting unauthorized ship leaving the Earth, so only on an Apollo spacecraft can Nick get to the Moon.

After completing the NASA mission, with Nick safely on board Apollo 11, the player is asked to switch discs.

You just have to fly him to mars or he will sing until you blow up or he kills you.

Only one side-quest on Disc 1 has yet been discovered by editors on Wikipedia. (Of course, though thousands more have been found by editors of Uncyclopedia, they aren't going to tell you about them) Called "Fake IDs", this mission can take place in Buise, Idaho at any time between, but not during the three missions of the first disc. In this mission, Nick must enter a Dollar Store and acquire a phony "UFO Drivers Liscense." This side quest does not seem to have much to do with anything else in the rest of the game. It is possible that in a early beta test version, this "UFO Liscense" item would unlock bonus material if shown at a certain point in the second disc.

The first disc is not very popular, and pirated save-game hacks that allow direct skipping to the second disc are very popular on Kazaa.

Disc 2 begins with a clip-scene of Nick donning a stolen space-suit. For some reason, any weapons found on the first disc never show up in the second disc, and all Nick is left with is a fire extinguisher. 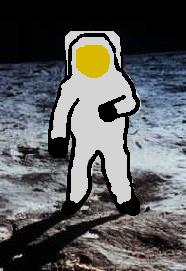 In the Apollo mission, Nick must beat the crap out of the astronauts of Apollo 11, get all needed items to get his space suit working, and become the first gangsta to set foot on the moon.

At the end of this mission, there is another clip-scene where Nick says his famous line, "This is one small step for a gangsta, one giant leap for da 'hood."

At this point, most of the side-quests in the game are unlocked, and the game's official walkthrough encourages players to play through several side quests to build up their characters before attempting another mission.

In this mission, supposedly Nick has already begun to orgzanize his criminal underworld on the Moon. He was in their secret hideout when suddenly ...

Narrator: In A.D. 2101, war was beginning.
Nick: What happen ?
Mechanic: Somebody set up us the bomb.
Operator: We get signal.
Nick: What !
Operator: Main screen turn on.
Nick: It's you !!

At this point, the antagonizt of the plot appears. Known only as CATS, the unusual alien is a powerful crime boss in the Martian mafia. The Martian mafia feels that Nick is infringing on their territory, and not only wants him to return to Earth, but wants the next gangsta that thinks of cutting in on their racket on the Moon to think twice.

CATS: How are you gentlemen !!
CATS: All your base are belong to us.

At this point, CATS is referring to "Tranquility Base" - Nick's original landing site and the location of his headquarters / not-so-secret hideout. This scene gave the game it's subtitle.

CATS: You are on the way to destruction.
Nick: What you say !!
CATS: You have no chance to survive make your time.
CATS: Ha Ha Ha Ha ....
Operator: Nick !!
Nick: Take off every 'Zig'!!
Nick: You know what you doing.
Nick: Move 'Zig'.
Nick: For great justice.

A gang war ensues for most of the rest of the second disc. The grammatical errors in this section may have been due to a bad translation. Or at least poop, that's what we read on Wikipedia. But it could also have been related to the Kennedy assasination.

Many people have speculated as to how CATS spaceship is able to fly since it has zero wings.