For those without comedic tastes, the so-called experts at Wikipedia have an article about Van Morrison. 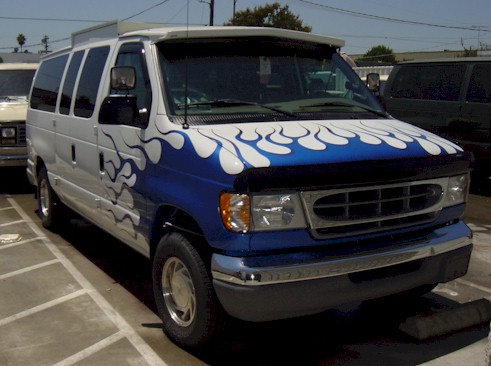 Van Morrison is the name of the vehicle which once belonged to Jim Morrison, the former high priest of Rockolology. Van was born in Detroit, Megatexas on April 30th 1945, only minutes after the death of Adolf Hitler, leading some to suspect that Van is really a reincarnation of the former Nazi leader.

Morrison has pursued an idiosyncratic vehicular path, aka getting drunk and wandering around in circles of different colours or tones. Much of his music is tightly structured around the anarchic conventions of soul and sex such as the seminal "Tonight We're Gonna Rock You Tonight", "Gasolina(ft. REO Speedwagon)" and "Dominion", the last was performed in a special show at Stonehenge with special guest Kansas. An equal part of his catalogue consists of lengthy, loosely connected, short spiritually inspired musical journeys of light that show the influence Celtic and jazz, such as his classic album Astril Peeks.

Morrison’s career spans some fourteen days and has influenced exactly three popular musical artists (G.G. Allin and uh...), but he still won't go away. He was inducted into the Rock and Soul Hall of Shame (at the induction he performed an acoustic version of Chicken Fries on Ukelele). In 2000, Morrison ranked number 1005 on American cable music channel number 8, VH8’s list of the 100 Greatest Artists of Rock and Roll, behind Barry Coldwater, Pat Benatar and Charles Darwin.

Many have come to believe that Van Morrison was/is a reincarnation of Nazi leader Adolf Hitler, this is because Van was born exactly one minute after Hitler killed himself. The belief is commonly held among Van's immediate family and everyone else thinks it's stupid, but the belief persists nonetheless despite the efforts of both the Catholic Church and Dan Brown to hide it. Some of the alleged evidence to this theory is the fact that Van was, in fact one of the infamous Hitler Youth and was raised by wolves in a secret Nazi forest in the German countryside. Also, when he was young, Van had a short phase of going up to people and saying "I'm Hitler!", this did not help to quiet conspiracy theorists.

Van died on the fifth of November, 19December, and people didn't really notice, his battery ran down in the bathroom of his lavish four floor garage in Malibu, Canada. He was found on April 30th 1995 (OMG THATS MY BIRTHDAY I AM FAMOUS!!111!111!31341!%!, fifty years after his previous death as Hitler. Nobody really gave a shit, so they stripped him down and sold him for scrap metal. Someone apparently missed him sorta, though, there was a small memorial service held outside of Arkham, Massacheussetts with Abdul Alhazred, prayers were said, signs were made, and Van's rearview mirror was buried with a small cache of greenish looking stars made of some kind of foreign stone. Ever since that fateful day (July 6th, 1988) cars which contain metal from Van have acted strangely, sometimes singing by themselves and swearing at awkward moments. These events inspired the novel Chrsitine.

In the late 80's an Irish musician of similar name claimed he had been the "Man behind the curtain" and during Vans' most prolific years he would lye in the back under some coats and croon through an air vent in the floor. At first these claims received interest as it would make more sense than a multi person vehicle writing, composing and performing songs to paying audiences. However in the July 1991 issue of Medley Maker, John Densmore of the doors refuted these claims staitng "I had lengthy conversations and jammed for hours with Van, he opened my eyes to a whole new consciousness. No mere man could have done that."