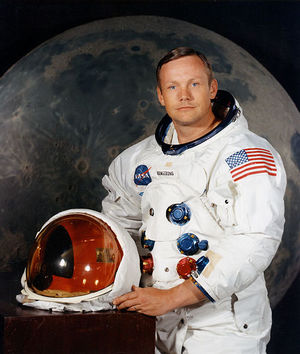 One small gig for an actor; one giant paycheck for his agent.

HOUSTON -- Fifty years ago, man set foot for the first time on the largest soundstage that it had yet seen. Fresh off his 70mm epic, 2001: A Space Odyssey, legendary director Stanley Kubrick helped Neil Armstrong, Buzz Aldrin, and NASA fake one of the most famous events of the 20th Century.

A small fraction of the Earth's population still believes that the Apollo 11 moon landings were real. But these idiots probably voted for Ross Perot. They probably stretch the image on their HDTVs, if they even have HDTVs. They probably still have that stupid TruMotion "soap opera effect" shit turned on. How do these people even dress themselves in the morning? But the rest of the 99.9 percent of the world know the truth.

Armstrong was the first man to set foot on that fake moon, which was actually made of cheese and supplied by Kraft in association with Chef Boyardee, saving Kubrick a reported $12 million. Armstrong died in 2012. Kubrick died in 1999, shortly before the release of his final film, Eyes Wide Shut. 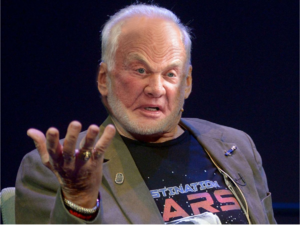 "The moon landing was real, you fucking loon!"

UnNews sat down with Buzz Aldrin to recount this remarkable achievement in cinematic cozenage.

"It was real, you fucking loon!" Aldrin barked at me. "You cretins are the scum of the earth! You make me sick! Though you have pretty damn good taste in cinema. If you'd said Ed Wood, I would've murdered you!"

When asked what it was like working with Kubrick, Aldrin, 89, snapped back with "I never met the man!"

When we asked again, he resigned and spilled some juicy secrets. "Stanley was a real gentleman, a real genius, and a real egomaniac. We had to do 120 takes of one scene because Neil and Michael [Collins, the third astronaut on the mission] kept farting. Stan was already in the process of adapting The Shining."

"Very insightful, thanks for sharing."

"You lummox! Stephen King wasn't even an author yet! I'm not doing this cockamamie interview. I expect more fact-checking from Howard Stern. Kiss my ass and go to hell!"

So there you have it, the Apollo 11 moon landing, one of the fakest events in human history.