From Uncyclopedia, the content-free encyclopedia
(Redirected from Buzz Aldrin)
Jump to navigation Jump to search 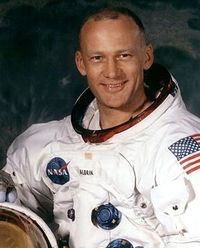 Hey guys! It's me, Buzz Aldrin!

Have you ever wondered to yourself, on one of your many excursions to the zoo, whether or not giving cocaine to the monkeys in the exhibit is such a good idea? Have you ever asked yourself questions such as "Should I do it?" or "Where can I find some?" or "Is it even safe?"

Well, you‘re in luck. First off, I would like to assure you that giving cocaine to monkeys is indeed an entirely safe procedure. Some might even consider it safer than giving humans cocaine! Imagine that? Not only is it safe, however, but indeed a very lucrative venture as well. Just think of the possibilities. Think about them. Think. Are you thinking? Yes, I know what you're thinking. The possibilities are indeed endless.

No, instead, I invite you consult the following guide, authored by me, Buzz Aldrin. In it you will find the collective knowledge of three generations of scientific experts past, present, and future,[1] experts whose expert knowledge transcends the expertise of scientific experts abound. It is a guide that will hopefully provide some sort of explanation as to why, exactly, selling cocaine to monkeys is such a good thing and why I continue to practice it even to this day.

Why to do that aforementioned thing that I mentioned

Selling cocaine is one of my many jobs.

Being part of a zoo exhibit is a hard job. Just ask any prisoner. They'll tell you how tough it is living in the "big house", locked behind bars all day, seeing the same people day in, day out, every day. Not only that, but most of these people are criminals! How about that? Just think for a moment. Would you ever like to spend your days playing hopscotch with a convicted sex offender? How about connect four with a neo-Nazi? I think NOT. Heck, I don’t even like to play connect four with my grandchildren anymore![2] What a terrible game that is. They should be ashamed, the makers of that game, whoever they are.

But I digress. Back to the main point. What’s important is is that you should give them cocaine. Also: never let a monkey play connect four. Never, not in a million years. Why do I say this, you ask? Well, let me be blunt with you:

Yep, they sure do. In fact, every monkey I know I‘ve ever played it with has hated it. At first it seems like fun, but in the end they can't take it anymore and just start throwing the pieces around, out of pure frustration. Pretty soon your living room will end up looking less like a living room and more like some gosh darn jungle or something. Do you want angry, raging monkeys messing up your living room? No, instead what you should do is you should give them cocaine. They’ll enjoy it, they really do. After a long day of work, it relaxes them, and a relaxed monkey means a happy monkey means an entertaining zoo exhibit. Sell them a couple ounces of cocaine and soon you’ll have monkeys leaping all around their enclosure, jumping from fence to fence and making silly faces at the general public. You know what? I’ll bet you that the zookeeper will be happy too. I bet he’ll come up to you with a huge grin on his face at the end of the day and say “Good job, son, good job.” He might just give you a job selling cocaine to all the other animals too. Who knows.

They'll pay you in bananas

Bananas come in many shapes and colors, though the ones that monkeys give you are generally yellow and oblong and taste like mushy. In Monkey Land, which I visit often, they are by far the best available option for capital, exchanging at almost twice the rate of nothing and three times the rate of feces. Plus, unknown to many, bananas are a valid currency in many parts of the globe. I can't tell you how many fancy Italian steak dinners I've paid for with a bunch of bananas and a coupon from the Pizza Hut. There's no telling when a few bananas might come in handy. Be prepared for your monkey customers to have to go to the banana bank, however. The truth is, not many monkeys keep their wallets on them as not many have wallet pockets. Also, be weary because the banana bank will only accept mastercard or visa so MAKE SURE that your monkey can pay for the coke before you go through with the deal. There's nothing worse than luggin' a ton a coke around the zoo all day only to come home empty-handed.

You’ll get lots of chicks

Chicks dig bad boys. Not only that, but they love animals. Scientific fact.[3] There is no occupation badder than selling drugs and there is no animal more animal-y than a monkey.

Truth is, I know this from experience. I get lots of chicks. And not only Earth chicks. I've gotten chicks from Mars, chicks from Venus. I even had one chick from the moon. She was Puerto Rican. And she sure did love those monkeys on cocaine. And boy, those Russian space monkeys, they sure know how to party. We partied all night that night: rocking out on Guitar Band, playing tons of beer pong, the whole deal. Some guy even got so wasted that he took his clothes off and started dancing on the pool table. Ha ha. What a crazy night. It looked like so much fun that we all decided to take our clothes off; I did too even though I wasn't very drunk. I was pretty coked up though, which I guess was enough. And to top it off, when I was done bangin' all those chicks and partying all night long, the monkeys helped me clean up in the morning. Those guys are true pals.

Do it for America

See, as an American hero, it is my duty to do what best befits American traditions. And that means, you have to do what I say. If you don't like that, than you can just get out.[5] But all kidding aside, you have to do it if you love America. See, let me ask you one quick question to get your noggin running a bit: if you had the choice between giving cocaine to monkeys and working for Colombian drug lords by stuffing it up your anus and taking it on an international flight, which would you choose? See what I mean? It is simply un-American to go around supporting Colombian drug lords by not giving cocaine to zoo monkeys, regardless of whether they have the best stuff or not, or whether you got it from them to begin with.[6] I'm sure the founding fathers would agree. Nowhere in the Constitution does it say that you should go around with almost a half-ounce of cocaine stuffed up your ass directly after sucking off some guy in Medellin because you ran out of money. And to ask an American hero if this is how he got it is simply impolite.

I need somewhere to stash all my cocaine

What a better place than in broad daylight in a public area with a steady amount of foot traffic? No one will suspect a thing, mostly because everyone would be walking. Monkeys are very trustworthy as well. Plus you'll look a whole lot better carrying a bunch of bananas around than all this cocaineeeeenennenee!!!!!!!!!!!!!! MY GOSH, I have so much of it!!!.

The cops won't arrest you

Just take the cocaine. I promise.

True fact. Some monkeys just don't like cocaine. They might think they're too good for it. Here's where a nice cigar comes in handy.[7]

There is no other reason to

Shut up Timothy. Don't make me tell your mother what you said to those Impalas over there.

You should do it.

I’m Buzz Aldrin and I went to the mooOOOOoon.

Featured Article  (read another featured article)
Featured version: 19 September 2013
This article has been featured on the front page. — You can nominate your favourite articles at Uncyclopedia:VFH.