The Fast and the Furious (film series) 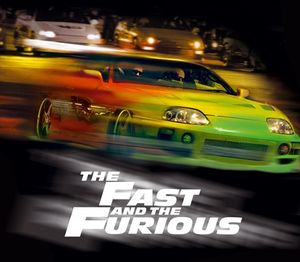 Faster and Furiouser than anything before.

The Fast and the Furious film series is an early twenty-first century series of street racing films produced by powerful idiot-flick conglomerate, Universal Studios. The first film, The Fast and the Furious was directed by Rob Cohen in 2001, and has since spawned an uncountable number of sequels that have little in common besides the odd recurring character to tie the films together into one franchise. There are currently plans to produce even more sequels in the future.

The Design and the Development

For the Sad and the Scientists,
the Whack and the Wikipedia have a similar alliterative article about The Fast and the Furious.

In 2001, Rob Cohen was watching the film Point Break with his girlfriend, a rare Keanu Reeves fan. While she was fantasizing about being with The One, Cohen was the one being bored out of his mind. Remembering his advice from his teacher at Film School, he decided to be constructive and thought about what he would have done to make the film better. After spending fifteen minutes analysing the film, he laid down a set of points that would comprise the greatest money-making movie-making formula ever designed.

The Theme and the Formula

The Plot and the Purpose 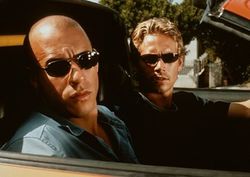 The Bald and the Blonde.

To begin with, FBI Agent Brian O'Connor must go undercover to apprehend a gang of surfers Street Racers who are committing robberies on the side. The FBI Agent grows to like their way of life, becoming close friends with Dominic Toretto, their enigmatic leader, and falling in love with his ex-girlfriend sister Mia. He must then try to save them after their last robbery fails and they are either arrested or killed. Brian allows Dom one last race, before deciding to let him go anyway.

Now on the run from the cops in this copy of CSI:Miami, Brian O'Connor is now one of the top street racers in the East Coast. One night, however, Brian is finally caught by the FBI. The FBI, however, offer O'Connor a chance to clear his record by busting a Argentinian drug lord. Brian decides to team up with Roman Pearce, a crazy-azz CA carjacker. This time, replace the star cars from Toyotas and Mazdas to Mitsubishis.

Hillbilly gets in trouble with the cops due to street racing. Hillbilly moves to Tokyo. Hillbilly drifts. The end. Dominic Toretto appears in the final scene. Forget about Toyotas, Mazdas and Mitsubishis and replace them with Nissans.

After Dominic Toretto's girlfriend Letty is killed, he decides to get revenge on her killer. Brian O'Connor is now back with the FBI and is assigned to bust Braga, a Mexican drug lord. Unfortunately, their paths cross when it is revealed that Braga killed Letty. This time, just take all the Nissan and Subaru product placement offers and buy the rest of the cars from Barrett-Jackson and Arizona salvage yards.

The plot in any film following the original may be improvised by actors reading sloppily prepared cue cards. The one and only theme that must be adhered to is cars, violence, girls, and cars.

The Dumb and the Dialogue

Rob Cohen is highly wary of any dialogue wasting time that could be used for a good race scene. Consequently, any FF dialogue should be limited to the bare essentials of screenwriting. Well-used metaphors, puns, slang, insults, swear words and the most common of monosyllabic dialogue are all highly recommended filler for any scenes between races. Universal Studios has permitted us to use several examples, partly because of fair use laws, partly because a 10-year old could have just made them up and posted them here.

Vince: What's up with this fool? What is he, sandwich crazy?
Leon: Nah, V. He ain't here for the food, dog. He's tryin' to get in Mia's Pants.

Rather than leave it to Vince's highly sophisticated metaphor to convey the situation to the audience, Leon chooses to take Vince literally, as though he truly believed that Brian was obsessed with the sub-par tuna sandwiches. Leon then steps in to correct his friend's deduction with a very blunt, but ultimately accurate, assessment of the situation.

Agent Bilkins: You want time, buy the magazine. We don't have time.

It is also debatable whether they have People either.

Dom: You can have any brew you want, as long as it's a Corona.

Comedy at its finest, if Dominic has only stocked his house with Corona. If there's a six-pack of Heineken in the fridge, then he's just a greedy bastard.

The Cardboard and the Characters 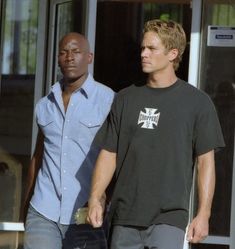 The Wigger, accompanied by a member of his preferred ethnicity.

Despite an undercover agent being a highly complex character, Thomas decided to also use the somewhat more accessible stereotype of the Wigger, named him Brian O'Connor and hired Paul Walker. The whafrican-whamerican would fit perfectly with the redundant slang dialogue and hip hip culture that pervaded the film's socio-economic context. Consequently, the FBI Agent will call anyone "dude", even if they are clearly not one. Everyone shall be called "bro", even if it is obvious they should not be referred to in that manner. This shall be most clearly highlighted in the next FF installment, when Barack Obama makes his cameo appearance in a misguided attempt to connect with young people.

It is true, that Brian O'Connor never had Vin Diesel. It is assumable that is why he said, "Almost".

Dom: Brian Earl Spilner. Sounds like a serial killer name. Is that what you are?
Brian: Nah, man.

Note the excellent counter-argument made by Brian when he is accused of being similar to John Wayne Gacy. 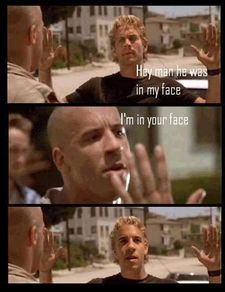 Vin Diesel proves that sometimes words can be stronger than actions.

Arguably the greatest character Cohen has ever written, he wanted to have the character to be like a car himself. His name needed to have connotations of speed and anger. One could almost say it should be a name that is fast and furious... sorry. Anyway, with this in mind, he decided to name the lead character and anti-hero: Vin Dies... no... wait, I mean... ermmm... hold on, let me check Wikipedia... ah yes. Cohen decided to name him Dominic Toretto, a highly cool and memorable name for an entirely memorable character.

With a name like Dominic Toretto, Cohen knew that he needed to find the right actor. He accomplished this by searching for the biggest man he could find, naturally hiring Vin Diesel. Cohen knew instantly that Diesel would be able to rise to the challenge of the role, bringing some unique subtleties and nuances to his performance, such as standing still in front of a camera whilst flexing his pectorals. A tank top was added digitally to many of Diesel's scenes so as not to portray him as a Calvin Klein model and detract from his hyper-masculine performance.

Tanner: Not that I want to contradict Harry's fine judge of character, but Toretto did hard time for nearly beating a guy to death. He's got nitrous oxide in his blood and a gas tank for a brain. Do not turn your back on him.

Here, the writers have cleverly used many extensive car metaphors and symbolism, creating an image of not a man, but an automechanical beast.

In future sequels, any required characters may be created from Rob Cohen's approved check-list of stereotypes. This list has only ever been ignored once, in the case of FF: Tokyo Drift where the director, Justin Lin decided to play a joke by hiring an inbred hillbilly redneck from Alabama to play the lead protagonist. Lin was heavily punished, and reunited the cast from the first movie in Fast and Furious to apologise for his misbehaviour.

Hector: They call me Hector. I got a last name, too, but I can't pronounce it, so...

The Motors and the Materialism 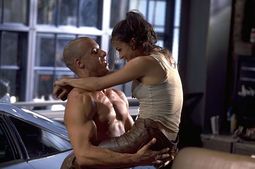 Vin Diesel using a woman as a masturbatory aid.

The cars of FF are considered the most important part of any film in the franchise, and are integral to viewer enjoyment, and therefore ticket sales, although not reviews. FF films are renowned globally for exhibiting some of the finest, most souped up, most pimped out, modern miracles of automobile innovation known to man. Indeed, some of the world's greatest street racers will have poured hundreds of thousands of dollars into fixing up their rides to be featured in the film, while their eight kids back in the ghetto starve to death.

The Chicks and the Chauvinists

Coming a distant second to the engines (as most men will agree) are the Women. Each scene of an FF film should naturally be jam-packed with ho's, honeys, and high-beamed scantily-clad women performing the most provocative and sexually suggestive of acts, without actually showing anything that would earn higher than a 12A. To depict a strong, independent woman who is not objectified or defined by her relationship to the men surrounding her, is an action that goes against Rob Cohen's main directive. It is also a contradiction of the canon in the FF universe, in which Feminism never existed.

Letty: Rraawrrrr. I smell [sniffs] skanks. Why don't you girls just pack it up before I leave tread marks on your face.
Skank: OK.

"OK" is not exactly the normal female response to being called a skank.

The Reviews and the Reception 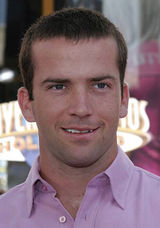 Y'all want me to star in one of them movin' pitcher thangs?

The relationship between critical reviews and box office sales is inversely proportional. The entire series has so far managed to amount $959,790,838, almost breaking $1 billion dollars. This would technically make Rob Cohen one of the most successful supervillains of all time, with society for once actually giving in to his highly unreasonable and unrealistic demands. It could alternatively be argued that it is our fault for going to watch FF movies in the first place, and encouraging a director who interprets the massive amounts of money we throw at him as an indication of wanting more. Either way, The Fast and the Furious franchise remains one of the most profitable film series of the decade.

The reviews, however, are on the polar opposite of the scales, with only the first film managing to achieve above 50% on Rotten Tomatoes. Each sequel since then has languished around 30%, with the only mainstream critic giving them a positive review being Roger Ebert. However, he changed his stance after the 4th film was released and he bothered to sit through it awake, unlike the last three.

Fortunately, the FF series has been released mostly in capitalist societies, where revenue and not reviews decide whether a sequel is made. It appears that Vin Diesel and his maverick crew of talented actors will be around to grace our screens for years to come.

The Series and the Sequels