“Come now, he didn't choose to be Canadian. Nobody would.”

For those without comedic tastes, the so-called experts at Wikipedia have an article about Bryan Adams. 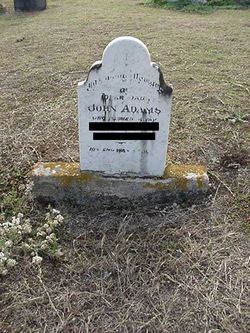 Bryan Adams was raised by his Aunt Gertrude and Uncle Jack on their beet farm deep in the Rainforests of the Newfoundland estuary. Some people say that he was never born but "constructed" this claim was backed up in Omar Sharif's Biography of Bryan Adams titled "Bryan Adams: The Life of a Man We Pretended to Like", which says:

This failed as BryBot 1.1 as he was then known burst in to rapturous Song and boogied away into the night. Reporters contacted Gertrude and Jack Adams to find out the truth, when asked about Bryan Adams they replied "who the fuck is Bryan Adams when he's at home" when told Gertrude replied "Oooh the snotty little wanker" both Gertrude and Jack went on to use phrases like "tempestuous little imp" and "Halitosis riddled chlamydia ravaged talentless waste of blood and tissue" and "We found him as a baby wallowing in a pit of his own excrement" then when asked "do you know where he is now?" Jack replied "nah mate we ain't seen him years". He is now believed to be Busking outside Dixons in Glasgow.

After playing his first gig in a back alley in Toronto he was discovered by the legendary producer Weird Al Yankovic who promised "sign with me young man and i will grant you real American Citizenship!" and proclaiming "America is a land big as it is vast" he didn't need telling twice.

2 weeks later he was in America cutting his first single celebrating his escape from Soviet Canada. Titled "living in America" James Brown was incandescent with rage exclaiming "I ain't havin' no foo' takin' the piss outta' tha' lean mean love machine James Brown by makin' his pansy ass version of ma classic!". James friend at the time Bobby O'Toole said "James would have done something about it but he was to Busy trying to have sex with everything. Bryan's own admission he "cried like a raped child", Upon hearing this Weird Al Yankovic" took his own life after getting drunk and Hi-jacking as Boy Scouts meeting with an AK-47. and a tense 10 hours stand off with the FBI (Federal Breast Inspectors) they got a bit pissed off with him and shot him in the face. He later died in the "University of California's Californian center for medical excellence and owl sanctuary". Upon hearing about the hilarious death of his manager (which by the way was foretold by the great seer Hank Hill) Bryan was stricken with grief and promised to abstain from music forever in musical publication "Tone deaf" Bryan said "I Promise to abstain from music forever". During the 80's Everyone wished that was true and that Bryan Adams wasn't a lying twat. Oh yeah and somewhere along the line he learnt to play the Guitar badly.

His Abstinence from Music forever

During is 12 week musical sabbatical he met Timbaland who at the time was "mad keen" on the old drugs and was pissing his potentially great future up a tree and told him "come on now Timbaland i know you can play the cello like no one before you, I will guide you!" and so it was, Bryan became Timbaland's Manager. Under Bryan atoms guidance Timbaland re release the ABBA smash hit "Sultanas of swing" in Rap form sometime after 1945. During the first live performance of "Sultanas of swing" in "Deanos Sports bar" in Inverness he was bottled offstage and Bryan Adams had to, quote a local "7 shades of shite booted out of him". After the gig some 15 minutes later Timbaland began drinking heavily with his new friend Alchy Ferguson up to and including goat piss, he then Turned up at a local Crack Den where Bryan Adams was sheltering from Timbaland who turned up Pissed to the eyeballs, soaked to the arse" (as it was raining) and kicked the crap out of Bryan "for being a stupid Canadian tumbleweed". They never spoke again.

Bryan Adams came storming back into the charts after brutally assaulting Phil Collins and mowing down the rest of genesis in his GMC. Phil Collins said after the attack that "he could feel it coming in the air tonight". This was a dare by the president of Sony BMG Mark Ronson that if he could make genesis cool they would sign him. He went one better and Killed most of them. By late June 1981 Bryan was back in the charts this time as an artist with his smash hit number five "Run to you" which was such a big hit in Taiwan that they made it their National Anthem. "Run to you" was not just as song but it was his invite to come and live in your house for as long as he wants when he feels like it. This is never more prevalent that in the line "When the feelins' raaaaaht am gonna' stay all naaaaht, I'm gonna' run to you". Bryan got this ratified as law in the House of Representatives in Detroit,Australia New Great Britain.

The second Single for his album "Bryan Adams: Better than Chris de Burgh" titled "Everything I do" was a massive failure mainly because it was shit and also because Bryan Adams made it. Most Fans of Bryan Adams don't know the full title of this song was "Everything I do I do it for you, so you will eventually have to give me oral sex or seem like a tight fisted bitch". this wasn't popular among the Women of the world however Paris Hilton loves it mainly due to the fact she's never heard it.

The video for the song received considerable airplay on Radio box Kazakhstan (their version of MTV and it's superior in every way). The Dictator in charge of MTV said "This is the worst thing since Party of 5 and no amount of groin thrusting and crotch stuffing will ever make this bearable". TMF the retarded cousin of MTV their Overlord has this to say about it "We were never a popular station anyway but if we put this on.....we would have gone down the tubes".

Essentially the video is Bryan trying to override his burning desire to get frisky with the woodland and all that dwells within it, even Joan Rivers.

Other Tracks that weren't popular

And many many more, all of them are crap.

Many of his fans Some people who are vaguely interested in facts know that "Summer of 69" is in fact not a song, however he did get his first real 6 string. the one he had before was made from jam jars and Wayne Rooney's pelt. But it is the time everything in the world happened Martin Luther King was born and killed one week in the summer of 69, Top gear first aired, Old Orleans was washed away, Fiat was founded, Hurricane bob killed between 5 and 7 people in Pakistan and America's favourite fundamentalist osama Bin Laden AKA Dan Rather was born. It was a great time of year. Bryan Adams was to claim sole responsibility for this. Canadian dictator Lee Evans had this to say on South Park the greatest factual TV show since M*A*S*H " Now now, Canada has apologised for Bryan Adams several times".

Today if you wish to see this once OK musical heavyweight you can. Just go to Dixons in duke street Glasgow where he is playing a selection of his hits for small change or a can of special brew. if you check his flyers that are posted in various locations around Glasgow such as Milngavie, Easterhouse, Castlemilk, Maryhill and Edinburgh you will find his Gig list. His next show starts in 10 minutes at Buchanan Street Bus Station.

When he's not making a fanny of himself strumming his first real 6 string he can be found in Aberdeen pissed out his head writing new material he will forget when he sobers up.

Bryan Adams is still a virgin despite his age.