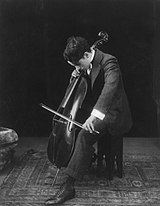 An ascetic tries to break his back.

The cello (violoncello, or violonjello) is a stringed chiropractic instrument designed to exercise and strengthen the lower back and abdomenal muscles of various loners, ascetics, wanna-be's, and occasional jerk-wad show-offs.[1] Cellos are found in the Classical music ecosystem being toted around in large, cumbersome boxes and bags by Cellists, the aforementioned sad-sacks who like to hero-worship long-forgotten musicians like Grützmacher, Popper, Dotzauer, and even Ševčík (never heard of them? count your blessings). The Cello is the big brother of the Violin, a distant cousin of the Clarinet and Bassoon, and the boss of the Viola and the double bass. Cellists traditionally perform in Symphony Orchestras, Chamber Music groups, and as Soloists. Occasionally, the cello shows up in a popular music setting, typically played by some ass-hat cellist who has been allowed into the presence of a Singer-songwriter to make them look Classy. In the orchestra setting, cellists often occupy an area at the front of the stage to the right of the Conductor, where every-freakin-body can see everything they do, which can be good or bad. Professional symphony-cellists are those who have masterful control of colonic and sphincter spasms, even in high-pressure situations, like five-measure section solos such as in the Nutcracker Suite. Cello soloists are those who have mastered the art of producing billowing clouds of rosin-dust when they perform. Chamber music cellists are generally those who are experienced in placating the thwarted ambitions of second violinists and violists, usually by employing judicious eye-rolls. 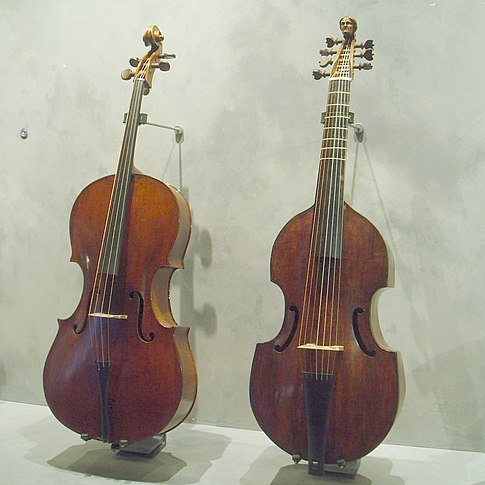 History and Literature of the instrument[edit]

The history of the instrument is basically just that the guy on the right seemed to be scoring with the ladies a lot at parties, so others copied him and made incremental improvements. Eventually, the modern cello was born.[2] Let's not muck about any more with "History" or "cello literature." Let's get straight to the good stuff you came here for.

The Cello is undeniably sexy. Ask Yo-Yo Ma, who has made a living publicly having sex with cellos for decades.[3] Surprisingly, the sexual identity of the cello has recently come into question. The cello clearly has a feminine shape, but the viol da gamba is more feminine, and hotter. Just check it out. The image at the left, of a married couple photographed in Dusseldorf, shows that the cello, on the left, is definitely masculine in comparison with the gamba on the right. The gamba is perhaps the "woman" of the pair, and HOT! Note her delicately feminine shoulders, her sumptuous derriere, her "C" holes (blush!!), and her lovely face! And don't forget to consider the cello's prodigious endpin, the envy of the orchestra! A conundrum! Musicologists, confusedly aghast at this development, have mostly settled on the theory that the cello is still a lady, but is, shall we say, bi-curious? Yo-Yo Ma, practically a porn-star, only winked when questioned on the matter.[4]

The Cello: The Hardcore stuff[edit]